Over the past year and change, Atlanta has lost a number of its’ most well respected chefs.  Joël Antunes left for the bright lights of New York, Guenter Seeger ran off into oblivion, and Michael Tuohy went to Sacramento (that’s not a misprint ladies and germs…SACRAMENTO!). [Quick aside – Tuohy is doing very well: LINKY]

At the same time, we have welcomed Jean-Georges, Tom Colicchio, Laurent Tourondel, and others.  While their restaurants thrive, despite mixed reviews in some instances, these culinary giants have grabbed a great deal of attention.  Deservedly so, I might add.  Toss in the emergence of our beloved and adopted Richard Blais [he’s actually a New Yorker … and dare I say..a Gators fan!!!], and there isn’t much room on the front page for anyone else.  While somewhat lost amongst them, chef Bruce Logue has garnered some well deserved attention from the local foodies (myself included).

Logue’s return, as he is a native Atlantan, is inspiring to say the least.  Though his skills as a restauranteur are not as polished as those mentioned previously, he has proven to be a very capable chef.  Read the rest of this after the jump.

While Logue does not have the name recognition of someone like Colicchio, his resume reads quite well.  Amongst other stops (Italy), he trained locally at Pano’s and Paul’s.  Perhaps even more impressive, he served as the chef de cuisine at Babbo, a popular NYU eatery started by none other than Mario Batali.

His dishes show the refinement of a seasoned veteran; meanwhile, he pushes the envelope ever so slightly so as to intrigue but not offend.  Despite a less than ideal location, and dreadful timing (anyone else want to open a business in this economy???), La Pietra Cucina, aka The Stone Kitchen, has vaulted to the near top of my list of favorite restaurants in Terminus.

Make no mistake, this place is NOT a trattoria.  It IS a ristorante.  In fact, I have read numerous reviews that have attacked La Pietra for everything from their decor to their setup to their signage (or lack there of).  If you are one of those reviewers… I feel bad for you.  I suppose under different circumstances, I *might* be more inclined to agree with the criticism; however, I just don’t get it.  Given the state of the economy and the “underdog” attitude this place emotes, I will gladly overlook the failures that are as much the buildings fault as they are LPCs.  In regards to the decor, I like it… so there!!!

La Pietra now occupies the space formerly used by Shaun Doty and Mid City Cuisine.  For those of you not familiar with the space, it is on the ground floor of the Invesco building near the intersection of Spring and Peachtree.  While Logue initially intended on utilizing the full space, they have, at least for the meantime, resigned themselves to the corner room which was previously used as a private dinning area.  I will concede that current setup makes for an unnerving entrance to the restaurant.  The vast emptiness of the main room would almost make you turn around and leave out of fear that the restaurant was closed.  The one saving grace is that the kitchen is on full display near the back.

The signage out front is sparse.  A “valet” sign sits street side, but far enough off the road that I don’t think anyone will ever notice.  It’s pretty small, especially when compared to the hanging sign nearby.  Unfortunately, that sign still reads Mid City Cuisine … bummer.

Back inside, the dinning room itself is clean and simple.  The accents have been tweaked a number of times since the restaurant opened, but they are always subtle and out of the way.  I, an avid minimalist, do recognize that a little bit of refinement may help; but I find the space up to par with many others nearby.

The operations at La Pietra are perhaps it’s only real failure.  The staff is lean, and while that in and of itself is not a problem, they just don’t have the kinks worked out. There is no host/hostess to seat patrons, and that does not lend itself to the “we’re closed” feeling you may get from the empty cavern you walk into.  The head waiter/maître d’hôtel/manager is extremely nice and very knowledgeable, but I have yet to see any semblance of a system implemented.  This lends itself well to the laid back atmosphere; but not well to prompt service.  This is not to say I have found the service to be bad.  Rather, it has been somewhat hit or miss.

A big plus, and I do mean big, is that they do understand the idea of service.  The number of times all party members are served simultaneously vastly out weights the alternative.  That’s very important and should not be taken lightly.  Though I feel awfully guilty by mentioning this, there is one male waiter that is the biggest problem.  In fact, I actually thought he had moved on.  He is very nice, but just not up to par.  He is horribly unkempt and perspires a great deal.  He never messes up orders, but always seems to be running a step behind.  One can only imagine what he will look like when the summer heat hits.  I have sent many a people to La Pietra, and several of them have made note of him.

But let’s be honest, the hick-ups in service are forgivable, even for the nice guy who just needs a little dusting, and the location/signage is a non-factor.  What isn’t forgivable is the food.  I say that with quite a smile as the food is just wonderful. 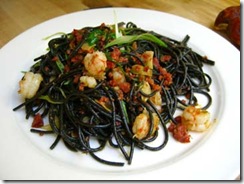 Chef Logue has done a magnificent job on all fronts.  The menu has been assembled with great care and detail.  The dishes are diverse, but not overwhelming in number.  It is evident that Bruce has taken the opportunities afforded him and made his own mark.  Even the dishes that he has brought with him from his previous endeavors are now his own.  For example, his black tagliatelle with rock shrimp closely resembles the version at Babbo (pictured left).  Logue has tweaked it a bit and it is without a doubt one of my favorite items on the menu.

The smoked tomato soup, accompanied by house made ricotta and pimenton (aka..paprika) is excellent.  Which brings me to another very important point: in house cooking.  The breads, pastas, and a number of cheeses are all made in house.  That’s impressive!  The bread basket served up offers some of that fresh bread and always includes those long thin sticks whose name eludes me at this time [As another aside… this is like the mental block of all mental blocks… I’ve sat on this post for a few hours simply to remember what these things are called and i just can’t do it – i should be shot as it is an incredibly common item at Italian restaurants, I have shamed all foodies with my failure].

As you might expect from a place where such items are made in house, the menu does “adjust” daily.  A handful of specials seem to float around and come and go; additionally, the printed menu has been adjusted several times.  One such example of an ever changing fixture is Logue’s seasonal risotto.  They are collectively my “Dish of the Year.”  Regardless of the ingredients (everything from duck comfit to chanterelle mushrooms to scallops), Logue executes the dish with remarkable consistency and balances the flavors with precision.  His latest endeavor, the scallops, may just take the cake.  A single, seared scallop comes served over a full bowl of light risotto.  The risotto itself has Brussels sprout leaves, chestnut butter, and diced scallops.  I suspect the base is a seafood broth of sorts.  Ultimately, I would say it is clam, but I may be, and probably am, wrong on that guess.  It is simply wonderful.  As an insiders tip, the risotto can usually be ordered in an appetizer portion.  The lone exception so far has been this latest take.

While the wild boar Ragù and the bolognaise are nothing short of experiences in awesomeness, this is not to say I absolutely love everything on the menu.  However, everything is made with care and with a purpose.   To explain, I hate broccoli (and I’m using the word hate here).  It is evil and the single most likely factor to cause world to implode.  That said, someone could do a good job preparing that unmentionable.  Such is the case with the clam sauce, and a few other items.  The clam sauce is just too oily, and while I like the acidic texture of the included pork, it just doesn’t do the trick for me.  Someone else may love it that way.

If you compare the menus at La Pietra and a place like Top Flr, La Pietra wins hands down.  This includes price point, value, quality of ingredients, and quality of the food.  It’s unfair really even though the cuisine types are different.  In a nutshell, La Pietra makes Top Flr look like Piston Honda after a minute in the ring with Little Mac.  Unfortunately, I can’t find a good picture of Honda all ravaged…so you’ll have to do with this:

But enough of my childhood endeavors, the prices at LPC are offensively inexpensive.  I really believe they are under selling their product, and in dramatic fashion.  I am befuddled by how reasonable the prices are, especially when the portions are more than ample, and at times border on the excessive.

The quality of food is right up there with any restaurant in Atlanta and it is the best Italian offered up.  Yes that includes other stand out Italian spots like Soto Soto and Il Mullino.  You can eat at Bacchanalia and break the bank, or you can dine at La Pietra and have a very comparable experience for 1/3 the money.  I am not trying to compare Bacchanalia and LPC as they are really trying for different crowds.  I am simply saying that price does not dictate quality.

The restaurant verges dangerously close to 3.5 stars; however, I do not like to use half-stars at this level.

As I have mentioned previously, there are few people in this city who have eaten there as much as I have.  A family member is the only one I am sure tops me in total trips, and Bruce Logue Sr. may as well.  We warmly regard La Pietra as the Club, and I see no reason for me not to eat there at least once a week (usually it’s closer to 3x).  I am anxious to see how this place grows as time goes on, but in the meantime … get there, and get there fast!