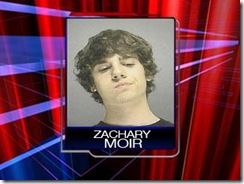 Apparently, blowfish isn’t the only food that needs to be tightly controlled.  Reports out of Orlando are that Zachary  Moir, a moronic 19-year-old, attacked his mother of all people.  Why? Because he did not want to turn off his xbox! His weapon of choice – a gun? Nay.  A machette?  That would be a no.  In this case the weapon of choice was a homemade taco!

I can assure you that the higher ups at Yum! Brands are relieved to know that no Taco Bell product was used in this assault.  I kinda wish they had been.  A potential suite against Taco Bell for making dangerous weapons would have been cool!

Ah, but my sarcasm has gotten the best of me.  Anyway, here’s the full story.