So we bantered back-and-forth all day long.  Were we going to do something last night? Would we go find a place or cook in?  Who was coming and who was going?  Finally, by 7:30 pm I was on my way to the grocery store.  I grabbed some olive oil, salt & pepper, and some Hobnob chardonnay [warning:another annoying website] and made like a tree.

What we knew – I would be cooking dinner.  What I did not know: What would that dinner consist of? While there was a strong push for my homemade meatballs, I just didn’t have the energy for that labor intensive of a process.  What would fit the bill and the tummy?

After wandering the aisle of my nearby Whole Foods, I picked up the phone to confirm what you already know: I was going to make mushroom risotto.

Risotto is something that you can get pretty creative with (Calling Bruce Logue); last night, I wanted to put together a straightforward and simple take on it.  Ideally, Risotto should be made with a medium or short grain rice.  In that respect, Arborio (wiki) and Carnaroli (wiki) get a lot of attention.  The advantage to using a short grain rice over something like Basmati is that the shorter grains will do a better job of soaking up the liquids.  Getting that pseudo-sticky consistency out of your risotto is important – so keep with the shorter varietals if at all possible.

As for the shopping trip, I first made a beeline for the ‘shrooms.  I grabbed a 1/2 lb of Portobello caps and a 1/2 lb of Crimini mushrooms;  Crimini are often referred to as “baby Portobello’s.”  Depending on what type of flavor you are looking for – you can mix and match mushrooms to your hearts desire.  The flavor combinations can be surprisingly different. 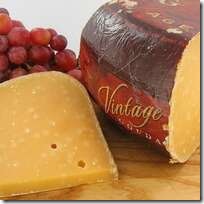 Next up, I snagged some chives and then hit my first snafu: no shallots.  No shallots … no problem … substitute green onions.  I circled the perimeter of the store, leaving the rice for last.  Three pieces of hickory smoked bacon, a slab of Robusto cheese and some Farmers Gouda Aged 5 Years (pic. left) and I was nearly finished.  As a quick note, Robusto is a gouda-esc cheese that is reminiscent of a sharp parmesan.  Thus, the two would meld together well.  Similar to the dynamic of the mushrooms used, do not underestimate the importance of your cheese purchase.

Anyway, I moved to the rice section and all hell broke loose.  I grabbed my chicken stock and continued down the aisle.  Though I did not know it at the time – my chicken stock was actually vegetable stock.  A) As I was making a dish heavy on the vegetables – I wanted the chicken flavor.  B) I have about eight tons of homemade vegetable stock in my freezer.  OH CHEESE BALLS!!!

Anyway, things got worse: the Arborio slot was completely and totally barren.  According to the helper dude, not a single short grain white rice was in the entire place. BLURG!!!  So in the lamest of a homage to Top Chef, I had to think on my feet.  Luckily, there was some Kalijira rice.  Kalijira is actually a miniature basmati.   It would do, but was far from ideal.  Anywho … the dish came out pretty good.  So here’s the recipe … nothing earth shattering – but it was quite tasty.

I apologize for not having any of my own pictures up at this time.  While I have narrowed down my camera selection to two different cameras – I have yet to take the plunge.