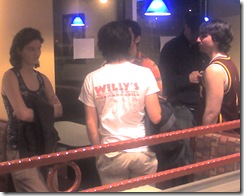 So tonight, I ventured down to the Panchero’s on W. Peachtree and Ivan Allen.  In case you didn’t hear, they were serving up $1 burritos.  I’m not really gonna “review” the place.  But to give you an idea, it’s basically like every other burrito chain.  The place was absolutely packed and normally, I’d have high tailed it out of there.  However, the people in line near me were pretty cool – so I stuck it out.  Anyway, I got a total kick out of the dude in a Willy’s T waiting ahead of me (hence the picture).

I grabbed two burritos (one is in the fridge right now) and added grilled veggies to both.  To my surprise, there was a $1/burrito charge for that stuff (.50 would have been my guess).  Instead of walking out for something like $3, the total came to $4.17.  A little bit of a bummer, but I can’t really complain.  Until next time – Buddha … out!