I’ve spent an inordinate amount of time in the Vinings area the past few days.  After a great lunch at Social Vinings on Tuesday and a disaster of a meal at nearby South City Kitchen later that night, I returned today to hit up Muss & Turner’s for lunch.  I haven’t spent this much time in Vinings since my move from the area some five years ago.

M&Ts is one of those trendy names in the Atlanta dining scene.  Joined by the techtastic foodies who run Chowdownatlanta and Eatitatlanta, we showed up for a late lunch with high expectations.  It was a meal of firsts for me and I was really happy to have some lunch buddies for the meal.

This was the first stop on the sandwich tour where I had two guests instead of one.  As an extension of that fact, due to the size of the group and my propensity for ordering a diverse number of items, we threw down an order of five sandwiches.  Up to this point, all the other stops on the tour included just two sandwiches.  The other first for me was my introduction to Ms. Chowdown.  She is a welcome addition to the stable of sandwich buddies that are helping me out.  As a complete aside … how is it that the thin ones can always chow down like no other!  Ms. C easily bested the boys.  Can I borrow some of that metabolism … please?

To keep with the spirit of this review, I’m going to mix up the reporting here.  Instead of commenting on each sandwich individually, I want to break things down according to the categories I grade on. 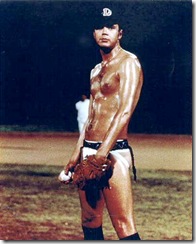 Challah? Really … this is what M&Ts calls challah?  Eek.  I know my challah and that was most certainly one of two things (if not both): a) not challah and b) bland.  While the bread was not stale, it did not hold any of the flavor components one usually finds in challah.  Regardless of the label one assigns to this grain, the bread was absent of any distinct flavor.

The foccacia was much better but not as good as I would have liked.  My initial bite was pleasant; however, after Ms. C started to comment on the texture and flavor, I decided to revisit the bread.  As I picked it apart, I started to see what she was saying.  Foccacia is an alpha-male bread.  Like Nuke LaLoosh (pictured), foccacia likes to bring the heat and announce its presence with authority.

In this case, the bread meekly stepped up to the plate and went down swinging.  The rich flavors I’m accustomed to were nowhere to be found.  What we were left with was a dense bread that failed to elicit much of a reaction.  In other words: the failure of the foccacia was in the absence of ingredients and not in the flavor of what was included.

More so than anything else during the meal, the meats were inconsistent.  In fact, the proteins are what inspired me to break the review down by category and not by sandwich.  None of the items amazed me, but there were some real failures.  Let’s start with the good!

The pulled pork was very good.  Mind you, I’m not talking about the sauce (that’s for the condiments section).  It was juicy and smoked as well as I could have hoped.  I was glad to see that they use a Big Green Egg, an item I recommend for every home smoker fan!  The meat was juicy and fell apart just as I would have hoped.  Meanwhile, the pastrami, although a little sweeter than I like, held up very well.  It does not stack up that well against the ‘strami at Zingerman’s Delicatessan; but, I would have no problem eating it again.  Speaking specifically to the Dooley and the Swifty, I found them very similar in flavor composition, texture, and execution.  Don’t get me wrong, they are clearly two different sandwiches; however, I almost felt like they were interchangeable.

Now with the bad: The fried chicken.  It was no bueno.  While the fowl was properly portioned, the breading had lost any semblance of crunch by the time I got to it (it was the first sandwich I ate).  In addition, the chicken was bland and dry.  I could go on … but why beat a dead Foghorn Leghorn?  I guess it is worth mentioning that Jimmy had problems with the chicken last time he was there.

Now with the ugly: The roasted turkey.  This stuff was used en masse.  Not only was it flavorless and dry, but it seemed to usurp the flavors of the other ingredients on the Gobbler.

Not too much to say about these guys.  They were probably the best part of the meal for me in so much as they were the most consistent element.  However, it should be noted that they were only prevalent on one sandwich, so take that at face value.  I’m pleased that M&Ts relied on in season vegetables and didn’t try to force any ingredient on us.

All alone, they were your traditional grilling vegetables with strong flavor.  The ones that were cooked were appropriately warm but far from soggy.  On the chicken, I was pleased with the slices of soured pickles.

I think I must have struck a chord with Ms. C.  She looked at with me with utter disdain after taking a bite of the “No Meat Please” as if to say: Why did you make me sacrifice precious stomach room with vegetables?  It is clear the gal loves her meat.  I guess my response to that is simple:  While the price of admission is high, the space inside this little firecracker’s stomach is not in short order! 🙂

The Swiss cheese was far better than the sample I had at Matty Cakes.  As Swiss cheese is a pretty common varietal, I would have liked a higher quality piece; but, at least it wasn’t blind.

The fontina melted perfectly over the vegetables.  Though it lacked the intensity I am used to [fontina is a traditionally pungent cheese], I found the flavor suitable given its use.  No problems there!

We were all quite pleased with the majority of the condiments.  While I’m not exactly sure where to put the horseradish slaw, I consider it a condiment.  I’m not a fan of slaw by itself, but I found nothing obtrusive about this edition.  I think the horseradish, and for that matter the flavor in general, was sort of lost on the two sandwiches where this was an included ingredient.

The handful of aioli concoctions were all very tasty.  I’m inclined to downgrade them a bit for their use; however, I will not.  I found the amount used on each sandwich to be appropriate.  That said, on a number of them where we found these type of sauces, I think the flavor got lost in the mix.   Our server brought us some extra red pepper aioli.  I know Jimmy and I really enjoyed the kick of flavor.  I am pretty sure Ms. C did as well; however, memory escapes me at this time.

As you may have deduced by now, the food was pretty disappointing.  The quality of product that M&Ts uses is higher on the quality scale than most restaurants.  Unfortunately, there were too many inconsistencies and execution problems.  I wanted to love it, but I left disappointed.  In looking at my scores, I’m wondering if I should have employed a weighted system.  Most people would say that the grains and the proteins are the most important elements of a sandwich.  Here is where M&T really dropped the ball.  Would I go back?  Sure, if it was convenient or if someone I was eating with had an hankering for it.  While this was not my first time at the pony show, I plan to return for the purpose of reviewing this deli/gastropub/restaurant on the whole.