Yesterday marked my first sandwich tour stop in over a week.  It was a needed break; but, I am happy to be back in the saddle.  After hitting up a handful of “gourmet” sandwich shops, I thought it would be good to return with a trip to a straight forward bakery. Henri’s Bakery … this is your cue to enter stage left.  Though I’ve done a full review of HB, this Atlanta mainstay deserved some tour love.

My mother will be happy to see this post go up.  She loves this place like there is no tomorrow.  Unfortunately, she’s going to be mad that I didn’t hand out anything close to a 4-star rating for this place.  The judges for this stop were Eat It dude, Papa Buddha, and myself.

Armed with my critical eating hat, we hit this place up for a late lunch.  We sampled three sandwiches and as luck would have it … all three of us had a very similar experience.

As I mentioned previously, this sandwich is really a shell of its former self.  There is one, undeniable reason for this: that damn fridge!!!  Here’s the deal, no matter how hard you try … you just aren’t going to get a freshly made Po’ Boy.  Due to the influx of customers in recent years, the staff is ordered to make these by the boat load each morning.  They are taken from the back and put out for the customers in one of those open fridge cases.  This has absolutely destroyed the bread. 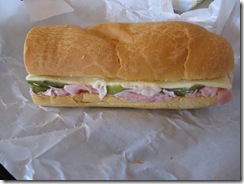 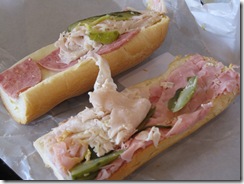 You can see the potential, you can feel the potential, and you can taste the potential.  However, that is all for not.  The French bread here has gone from awesome all the way down the ladder until it settles in as “better than average.”  In addition, the refrigeration has caused the bread to crack in a disconcerting manner.

Meanwhile, the cold cuts utilized on this sandwich remain as strong as ever.  They maintain their individual flavors yet meld together nicely.  None of them are dry, and that should not be taken lightly.

Meanwhile, the Swiss cheese gets lost in the mix.  On its own, the cheese is just fine.  It is nothing that will set your imagination free; however, it is far from bad.  The real problem with the cheese on this sandwich is that it seems lost and wimpy.  It adds more to the texture of the sandwich than it adds to the flavor.  Needless to say, if it were more overt in its flavor, it might over power the other ingredients.  Supposition has no place in this review – so I must dock them for the cheese’s disappearing act.

We found that the mayo and spicy mustard were used appropriately.  Eat It and I both felt the real stars of this show were the pickles.  That seems odd as I consider pickles more of a condiment than a vegetable.  The pickles served as the perfect accent to the flavor of the cold cuts.  The bites with that crunchy little green sliver found its way into my mouth were my clear favorites.

Despite the aforementioned faults, this sandwich is fairly tasty.  The fact that I can say that given the amount of faults should speak to just how good this thing could be more than anything else.

Ah, yet another victim of the refrigerator demons.  Unlike the Po’ Boys, you can usually get one of the sandwich makers to prepare a fresh one for you.  However, this is the sandwich tour.  Thus, it is important for me to replicate the experience as most people would have it.

In the chili weather, an onion roll holds up much better than the French bread holds up.  The roll seemed relatively moist and springy.  Meanwhile, there was a buttery flavor to the crust that really hit the spot.  These things are all true to the form of a fresh onion roll; however, it was still nothing more than a cruel tease.  I knew how much better these could be if fresh. 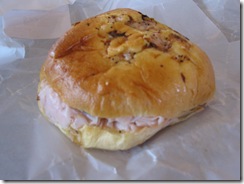 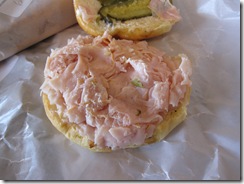 The smoked turkey was my favorite of all the cold cuts.  On its own, the smoked technique elicits a distinct sweetness in the turkey.  Some may find it a bit much; however, I really enjoy it.  Perfectly portioned over the roll, the turkey seems to push forward the buttery flavor of the roll without making you wince.

As expected, the pickles did the job!  In this case, I think they provide the perfect balance to the sweet flavor of the turkey and the mayonnaise.  The crunchy texture becomes much more important (and apparent) on a sandwich like this than it does on a stiff Po’ Boy.

Outside of the refrigeration fact, the only other thing about this sandwich that I struggled with was the mayonnaise.  As I have come to learn, mayo is a fairly polarizing ingredient for people.  In fact, I remember the man to my right proclaiming: “I’ll eat mayonnaise if they give it to me.”  In other words: he would never request it on his sandwich; but, he will eat it if present.

To use the word excessive would be a misnomer (of sorts).  I was fine with the amount of white stuff on this baby; however, I could see someone more adverse to mayonnaise thinking that there was a tinge too much.

So while there are short comings, there is enough good in the sammy to leave you satisfied.  Meanwhile, it teases you with potential.

This was easily the worst sandwich of our offering.  As one of the newest additions to the menu, I was anxious to try it.  The bread has been discussed enough, so there is no need to go into a great deal of detail here.  However, if you recall my insider’s tip from that previous review, you will know how much I love Henri’s French bread when it is heated. 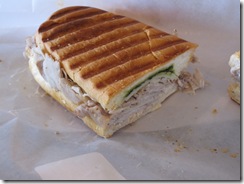 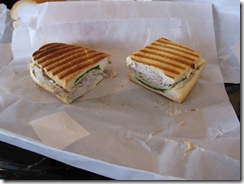 The pickles were a strong as ever and the portioning of the chipotle mayo and the cilantro pesto was good.  However, the flavors of those condiments left something to be desired.  Neither of them made me turn my nose up in disgust; however, the mayo lacked any real kick to it.  Where was the chipotle?  The cilantro pesto just didn’t work.

The real failure of this sandwich was the pork.  It was dry as the Sahara and I was unable to discern any good flavor, probably because I was dousing my mouth with water to help feed the children.

It’s pretty clear this sandwich falls outside of the comfort zone for Henri’s.  I am not sure if they intend on this being a permanent fixture on the menu, but let’s hope not.

Henri’s is yet another one of those places where there is/was a mix of good and bad.  At the end of the day, this was a tough review for me to swallow.  I’ve had these sandwiches enough to know that Henri’s is capable of so much more.  Unfortunately, that damn fridge has really ruined it for me.

When I reflect on the final score for Henri’s, I think it’s a fare score.  Speaking specifically to the sandwiches, Henri’s showed slightly stronger than Muss & Turner’s and Souper Jenny.  Stick to the cold cuts here and you’ll be happy.  Oh, and while they did have a veggie offering – I just couldn’t muster up the nerve to order them.  Much like the pork panini, they just don’t seem to fit at Henri’s.