Most everyone who has dropped in on the bustling town of Vail, Colorado remembers the Swiss Hot Dog Company.  The casual eatery had been a fixture in Lionshead for the past couple of decades.  A few years back, owner Ernst Larese and his beloved wienie joint uprooted a few miles down the highway.

Regardless of the reason for the move, the neighboring town of Avon welcomed Ernst with open arms.  Now, Ernst and his austerely decorated joint find themselves at home in a slick new strip mall.  While we are all a bit bummed that the original location is gone, foodies, critics, and diners from all over the world are just glad this place is still going strong! [Don’t believe me? Just ask the Blissful Glutton – she freakin’ loves these doggies] This post is as much about the food as it is about the man who puts it out.  Seriously, can anyone with a Moo Cow for a logo be anything less than a fascinating eccentric?

Ernst Larese was born in Italy in 1932.  Shortly thereafter, he relocated to Austria.  As the war came to an end, Ernst (born Ernesto), found himself a rolling stone.  That freedom led Larese to join the French Foreign Legion.  He was deployed to colonial French Africa where he helped protect locals from slave trade and prostitution rings.  When that ended, Larese and a couple of army buddies headed to Australia (yeah … that Australia).

He quickly made himself at home and became a self-described beach bum.  Sometime thereafter, Ernst met a wealthy Australian who assumed (incorrectly as it turns out), that Ernst must have known something about skiing.   This led Ernst to work for a handful of ski resorts.  Time went by and as luck would have it, in the 1960s, Ernst decided to relocate to the states.

In 1967, Ernst and his wife Simone got out of the ski business and into the hot dog business – the Swiss Hot Dog Co was born.  Though she wasn’t around when we showed up, I remember Simone from the restaurant’s days in Vail.  She is as approachable as Ernst is.

In a world of multi-millionaire egos, expense account meals, and celebrity vacationers, Vail and its closest neighbors have developed a strange personality.  One the one hand, you have a group of towns filled with laid back denizens who scoff at all things corporate.  At the same time, there are a handful of big wigs that control the area’s finances.  A lot of money gets tossed around this tiny Colorado town.

As I alluded to previously, the atmosphere in and around the Swiss Hot Dog Company seems to reflect the dichotic nature of the area.  The strip mall itself is as modern as you will find.  Slick lines, shiny metal, and a funky wood top scream Euro-trendy.  Ah, how appropriate that the SHDC calls this home.

If I didn’t know better, I’d have walked out as soon as I walked into the 50-seat eatery.  It lacks any distinguishable personality: a handful of old Swiss Alp posters adorn the walls and a solitary tree that sits uncomfortably in the rear.  For those of us in Atlanta, this reminds me of one of those dumpy little restaurants that struggles to earn its keep in the outskirts of metro ATL.  Yet the place is clean, and the simplicity makes the experience all the more intriguing. 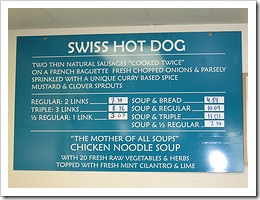 As you make your way past the drink fridge and up to the counter, your eyes are drawn to the large blue menu hanging behind the counter.  In true Ernst fashion, this thing is as simple as it gets.  The type face is simple, the color scheme is plain, and you really only have two options.

At the top, a brief blurb informs you of the ingredients of a Swiss dog and the middle of the menu provides you with your options.  Meanwhile, the bottom third of the menu curiously invites you to try their only other available item: “The Mother of All Soups.”   This chicken soup is made fresh every day and includes twenty different types of vegetables and herbs.  I figure the thought process for most newbies goes a bit like this:

A hot dog with a cup of chicken soup?  What the hell is this dude thinking.  Oh well, this is just to intriguing to pass up!

So the hot dogs themselves are actually brought in from Denver.  A few years ago, that might have surprised me … how can a place renown for its dogs not make them in house?  Truth is, hot dogs are hard as hell to make.  Thus, I don’t fault Larese for outsourcing his main ingredient.  He buys a good product and he doesn’t screw it up on the stove … so good for him.

His dogs are actually closer to brats than anything Hebrew National puts out.  They are long, thin, and consist of a pork and veal blend.  They are prepared on a Wells VCS 2000.  Wells being the company and VCS being the catchy and inventive model name [cough .. ventless cooking system].  So while the dogs are being reheated (as most dogs are), Ernst goes to work on the rest of the getup.

He takes a miniature French baguette, slices it and tosses it in the toaster.  I’m pretty that due to the size this means it’s not a baguette…but hopefully you get the idea.  By the time the bread emerges from the conveyor belt, the hot dogs are finished.  The bread is coated with some freshly chopped onions and a bit of parsley.  Two links (on the regular dog) are placed in the middle and on top goes spicy mustard, clover sprouts, and a spice mix.  That spice mix, which comes in one of those big tin shakers, is a primarily curry.  A touch of coriander and some other Indian spices are in there – but my palate is not advanced enough to extract the individual components. [That bread is brought in daily by the way].  With that, Ernst will take his masterpiece, wrap it in napkins, and present it to you right there at the counter.  That’s right … no plates and no silverware.

Regular dogs come with two links; but, a 1/2 dog is actually one link sliced in two and placed on half a roll.  Papa Buddha wasn’t that hungry – so he had the half dog.  I myself wasn’t that hungry either – so I got myself a regular in lieu of my usual triple.  Mind you … the last time I had one of these was 4-years ago.  If you haven’t figured it out by now … the soup is required eating in my book.  Thus, we each got an order.  A regular dog with a cup of soup will run you $10.00! Not bad no matter where you are.

After Ernst ladled out our soups and wrapped our dogs, we plopped ourselves down at one of the ten tables in the tiny restaurant.  I went straight for the soup.

The color of this soup and the wealth of fresh vegetables will almost certainly intrigue you.  Surely – a place like this can’t make soup that good.  Guess again!  This stuff is easily the best chicken soup I have found outside of my grandfather’s kitchen.  The vegetables and herbs are perfectly balanced, the noodles are delicious, and the acids deliver the perfect zest that makes this stuff truly awesome.  A slice of lime, some fresh mint, and small bit of cilantro provide underlying flavor to each bite.  If I had to point out a shortcoming of this soup, it would be the chicken.  It was boiled perfectly and fell apart in my mouth as I hoped it would.  However, I would have liked to see a few more pieces floating in with the medley of vegetables.  That statement might be indicative of the critical eater in me and not representative of my experience.  As I slurped up the last bit of juice, I can’t say I was actually bothered by the dearth of chicken.  It is only in retrospect that the point seems to take shape.

I turned the cup upside down over my mouth to confirm what I sadly knew – all gone!  By the time my cup hit the table my mind had forgotten all about the disappointment some two seconds prior.  My eyes darted across the table until they settled on the white pile of napkins … underneath that snowcapped mound was my treasure.  Forget unwrapping it … I shredded through that paper like a rat goes to cheese.  Ah… my joy: You bite … first through the warm bread, down through the sprouts, and finally to the star of the show.  As your teeth move through the layers, those ingredients come together to form a harmonious flavor combination.  Despite what might appear to be a low meat to bread ratio, once you have popped the casing and taste the brat, you realize it’s just near perfect.  In an ideal world … I say get the triple.

Nonetheless, the subtle hint of onion, the mustard, the sprouts, and the fresh but toasted bread set this dog up for success.  The links hit it out of the park.  Unless you dislike veal and/or pork, I would guess that most anyone else will find this dog to be darn near perfect.  I managed put down my little bundle of joy long enough to snap a shot of my food.  You’ll notice how well everything stayed together … no small wonder given my excitement.

Ernst definitely likes to keep things simple and that is reflected in every aspect of his business.  His stories are somewhat legendary around town; amongst the locals, people argue as to what aspects of these crazy tales are indeed fact and which are hyperbole.  Regardless, the food is excellent, the atmosphere is friendly, and you’ll be hard pressed to beat the value this place offers up.  In a part of the country where a cheap lunch will run you $20 bucks, this seems like an awfully good deal.