Word travels these days.  Recently, I was turned onto a relatively new supper club by the name of A Prelude To Staple House (alternatively: staplehouse.com).  Run by Atlanta chef Ryan Hidinger and his boss (echemm… wife) Jenifer, Prelude popped up in early January.  With roughly six meals under their belts (as of the 31st), it looks things are moving along well.

I have yet to make it to one of these events (they keep filling up), but I still think it’s worth mentioning.  With some hard work and a little bit of luck, the couple is hoping to open a restaurant of their own in the near future.  More after the jump! 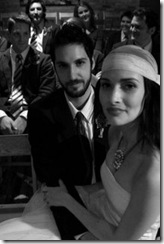 Though the duo hails from Indianapolis, Ryan has ties to the city.  He graduated from the culinary program at the Art Institute of Atlanta and some family members live here.  The Mr. posted a little bio a few months back, but the short of the long is that after some time on the line at Bacchanalia (and their sister restaurant Float Away Café), Mr. Hidinger landed at Muss and Turner’s, where he now spends his days.  I must say, it appears that M&T is well aware of the Hidinger’s goal … and they appear to be on board with that idea.  That gets a tip of the hat from me.  Nothing worse than a restaurant that thinks they own their employees culinary future. [Note, I lifted that pic of the couple from their blog … must give credit for that]

So five months into this escapade, their dinners are selling out, and things look to be heading in the right direction.  As this is a casual dining experience, not a lot is set in stone.  From what they tell me, a visit to Prelude will run approximately $45/head and it doesn’t appear they are adverse to tipping.  Prelude seats a maximum of eight people and do somewhere around five to six courses.  Each course is paired with beer or wine, so that will make the $45 price point easier to swallow for those of you watching your Benjies.  Still, I’m not a beer guy, so I will come equipped with a flask.

Some things are still getting worked out, and that’s just fine.  Hidinger has a hard time labeling his food.  When it comes time to make a fixed menu, that will probably change.  After all, people do need to be able to answer the inevitable question: “What type of food do they serve?” 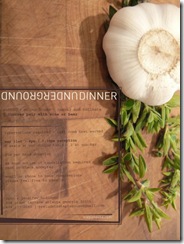 In the meantime, Ryan says his food is “a bit adventurous, but still very straight forward.” He goes on to say that “it’s playful, but not gimmicky.”  In looking over the menus (which are all posted on the blog), it seems Hidinger has an aversion to molecular cooking.  Instead, he is one of the many followers of the ever popular farm-to-table movement.  So for the sake of ease, let’s just say that Hidinger mostly focuses on sustainable food from nearby sources.  I say mostly since I have seen an oyster and the like pop up on the menu.  Still, he employs Gum Creek Farms (via localharvest.org), Riverview Farms (website), and Love is Love Farm (facebook) as much as possible.

In the upcoming months, they are gonna mix things up a bit.  They hope to have some family style dinners culminating with a big blow out as we get back to the cold.  Their plans for the blow out are quite ambitious.  For $25, you’ll get some live music, all you can eat and drink, plus a movie screening.

Like everyone with a real passion for the culinary, the Hidinger’s want to make Staple House into a place that has great food and a great atmosphere.  They want a come as you are environment, and based on my early interactions with the couple … that seems to be the case.

They have a long way to go before they bring their kitchen to the masses and they are trying to start slowly. While successful private meals will not guarantee a successful business, they are a thing to be appreciated.  The couple seems approachable, and anyone willing to cook for strangers, cost or not, has some chutzpah that should be respected.  So if you want to see what this is about, send an email via this link. I took the liberty of filling out the subject line for ya’ll.