At first glance, C&S Seafood and Oyster bar is another in the long list of Atlanta restaurants that under delivers and over charges.  As with all first impressions, it’s hard for any single diner, myself included, to ascertain the differences between systematic failure and the anomaly of a bad meal.  If I had to venture a guess, I would say that my experiences to date at C&S include some failures on both fronts.

Open a bit over two-years, C&S has been a divisive entry in the Atlanta dinning scene.  Owned and operated by restaurateurs Rich Clark and Jon Schwenk, this upscale Vinings restaurant has garnered praise from a number of media outlets.  In fact, Atlanta Magazine named them the best new seafood restaurant back in ‘07.  The following year, AM called them the best seafood restaurant in the city while the AJC put them in the Top 50 overall.  Meanwhile, a number of patrons have let it be known that things aren’t up to snuff.  It seems for every person that loves this place, another finds it a failure.

Though reports as to the nature of each owners résumé are muddled in the press, Schwenk did indeed serve as a chef at Brasserie Le Coze (now F.A.B. in Downtown).  Beyond that, there are references to Atlantic Seafood in Alpharetta and the Atlanta Fish Market for the duo.  Whatever the case, given that type of playground, it is therefore no surprise that C&S is a high-end take on the oyster bar experience.  What is a surprise is the location.  Oddly situated in strip mall anchored by Kroger, it would seem that C&S is primed for the Buckhead neighborhood.  I must admit, once inside, the parking lot quickly becomes a thing of the past. 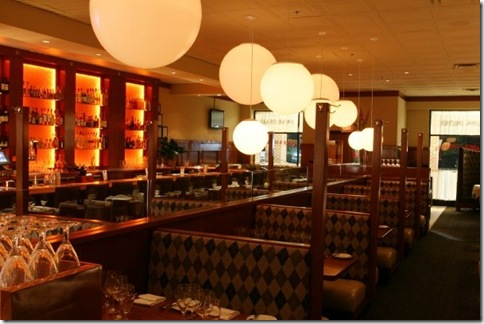 The rich browns, frequent use of leather, and a handful of off-white elements create an environment that reminds me of a seafood bar with hotel undertones.  The shotgun layout leaves the “drinking bar,” 5-seat oyster bar, and open kitchen on the right.  Meanwhile, an island of booths sit comfortably in the middle, while the free standing tables against a half-booth line the left-hand side of the restaurant.  My only true complaint with the layout and decor is towards the back.  Stacks of chairs are stored in plain view (on the way to the bathrooms) and the service portion of the kitchen is on full display.

Servers march around, somewhat haphazardly, dressed to the nines.  This lends itself more to a Morton’s Steakhouse than an ACME Oyster bar.  I’ve heard from others that the service is friendly, professional, and drifts toward overbearing.  My experiences so far lead me to believe that it’s friendly, loose around the edges, and drifts toward sporadic.  I’m not adverse to informal service, even at a price point like this one; however, the touch of informality I’ve seen is a bit misplaced.  On more than one visit, I’ve had my paper menu lifted from the table, only to have a plate placed down and the menu returned so that it is awkwardly resting on the tableware.  Not the type of thing that has any real impact on my feelings about the experience, but worth noting nonetheless.  That said, taken in its entirety, unusual service experiences like that one do draw my attention. 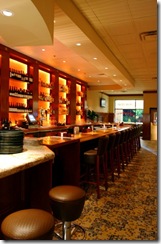 I haven’t spent any time exploring the wine menu or the drink specials, so I must defer those comments until a later time.  Meanwhile, the lunch menu and dinner menu have a great deal of overlap and some different elements.  Items from the raw bar, the seafood cocktails, the hors d’oeuvres, the soup and salads exist in duplicate.  Amongst those, only the hors d’oeuvres came at a reduced price during lunch.  In addition, there was some difference in both the price point and the selection of the entrées.  The biggest difference in the menus is that during lunch, a number of sandwiches and entrée style salads are available.  At night, those sections fall away, only to be replaced by a small selection of dry aged steaks and some options for seasonal crabs and lobsters.  In what is total conjecture on my part, it appears that lunch menu, or a portion thereof, is available at the bar during the evening.  This is somewhat frustrating to me.  I don’t mind separate menus, but given the lack of separation between the spaces, it seems silly to tell someone at a table they can’t order a burger at night.  I’m sure it’s an attempt to keep the average ticket at the tables nice and high for the servers – and they do a good job of that [Unfortunately].

The majority of the menu forgoes cutting-edge ingredients and techniques.  Instead, Schwenk relies on traditional elements and straightforward delivery.  I actually appreciate the attempt here.  If I felt they did a better job with the food, I would not think twice about that choice by the owners.  Still, the short stack of steak options seem obligatory, and it is a disappointment that there are not more vegetarian friendly options.

To date, my experience has been limited to the shellfish.  Part of that is due to my absolute love of oysters, shrimp, clams, lobster, and the like … the other part just being that there is only so much one can eat during any given meal.  I’ve heard good things about the soft fish that lines the menu, and I might be willing to go try them.  Only time will tell if that happens. 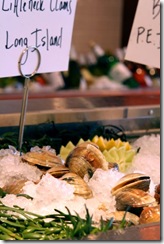 Speaking to what I have experienced, we have a mixed bag.  I’ve sampled roughly two dozen oysters at C&S.  The vast majority of them have displayed the traditional qualities of the individual varietal.  I won’t elaborate on each experience, as oysters are like the wine of the sea.  They are a complicated and diverse species that are worthy of their own post (hmmm … good idea!).  Unfortunately, I know at least two oysters have caused violent reactions in one of my dining pals.  This past meal, when we politely informed our server that one of them was most definitely bad, she provided a half-cocked explanation that made it sound like we didn’t know what we were talking about.  We weren’t looking for sympathy or a freebie, we just wanted to let them know what was up.  I smelled the shell afterwards, it was skank.

The rest of what I’ve had at C&S comes across in a similar manner.  That is to say that nothing was absent of at least a problem or two.  In order to mix things up, we sampled the cru du jour: a fluke ceviche.  One of the more forward thinking dishes, this was a pretty distinct failure.  The dish included sliced radish, coconut milk, jalapeños, and a touch of other ingredients.  Ultimately, it did not come together well.  Served in a martini glass, C&S fell victim to the same reality that Livingston does.  If you are going to use a glass to serve a dish, don’t use an abundance of sliced lettuce to make of for the small portion.  Meanwhile, the fluke was bland, the sauce was bland, and when the waitress assured us that there was jalapeño, we did a double take.

Other samplings included the lobster tail (more on that in a bit), the lump crab cake, the New England clam chowder, and the Oysters Rockefeller, and sides of the truffle parmesan fries and the mushrooms.  The lump crab cake was easily the best item we sampled.  Don’t be too shocked, we had some pretty big issues with it.  The cake itself was heavy on the crab.  It’s nice to see a seafood joint use the crab as the predominant feature; I’ve seen the crab hidden behind crumbs and butter more than I care.  The softness of each bite was unfortunately marred by the presence of champagne butter.  Used liberally, the bites with the butter were unnervingly creamy and a tad too sweet.  The capers did little to balance that out and the tomatoes were simply just there.   If you managed to corral some crab without the extras – you ended up with a really well prepared crab cake.

Things spiraled downward from there.  The Oysters Rockefeller had a great deal of potential.  The balance between the bacon, spinach, crumbs, and fats was great.  The bacon wasn’t excessive, but had become a bit chewy.  More profoundly, the oysters were baked beyond any reasonable recognition and were thus … severely burned.  If they weren’t overcooked, I would have been pleased with them.  The clam chowder was pretty shameful.  Armed with slivers of bacon, diced potatoes, and thick on the cream, it wasn’t the most visually appealing rendition that I’d ever seen.  The “fishy” taste (somewhat spoiled that is) was far from absent.  I would suspect wet that the broth base was fish; perhaps there was some clam juice used as well.  Whatever it was, too many of the bites were soured.  The worst examples came when you found a clam.  They were tough, chewy, and definitely pungent.  Obviously not the freshest of clams, the fact that they were chewy leads me to believe that they were simply left in from the early stages.  Clams should be added late in the game – they don’t take long to cook.

Last but not least were the broiled lobster tails.  We opted for truffle parmesan fries and the confit mushrooms.  The shredded parmesan was generously added to string potatoes.  Unfortunately, the truffle oil seemed lost, and the flavor of the diced scallions really clashed with everything.  Still, you could easily shake off the toppings.  What you were left with was nothing more than a thinly sliced French fry.  Meanwhile, the mushrooms were a joke.  I have no idea why the word confit was used on the menu.  What showed up was a tub of chunked ‘shrooms where by the inhabitants had been tortured by the flame for far … far too long.  More importantly, the same can be said of the two skimpy lobster tails.  For $45 and roughly 3/4 lb of lobster – this one really didn’t float well with me.

Start with the fact that they ran out of lobsters.  Not unforgivable, but certainly worth noting in a restaurant that is almost entirely del mar AND that we were eating around 7:30.  Even worse was the execution.  The tails had been broiled for so long that the shell was charred beyond what was to be expected.  As it would follow, the lobster itself had been dried out and was heavily peppered.  Given the cost, the amount of food (roughly 4 bites/tail), and the two poorly executed sides, I have to say that this was a significant failure.

Except for that fluke ceviche, I have yet to venture outside of the shellfish options.  Their inability to execute even the simplest of dishes leaves me hesitant in that department.  One meal there ran around $200 before tip.  Granted, that included a half-bottle of Vueve and four liquor drinks.  Even removing those elements, the price point here screams for a better experience.

While all the elements for a successful meal are there, it is hard to tell if C&S really has the chutzpah to pull this one off.  I really want to love this place; but I think that might be a bit of a stretch.  Return visits for lunch are not completely out of the question; however, without someone else to foot the bill, I am not sure I’m ready to surrender such a large portion of my paycheck for another meal here.

It seems like they have a dead-eye for the Lobster Bar.  Despite some significant problems with some of recent problems at TLB, I feel like C&S has a long way to go before they find themselves on equal footing.

NOTE: The images used in this review come from the C&S Facebook Page