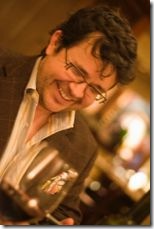 This is the saddest news I’ve ever had to break!  Sir Hardy of Wallace, known around these bits as Dirty South Wine, is leaving us (at least temporarily).  Thanks in large part to community support, Murphy-Goode Winery chose Wallace to take over their social media position that I’ve talked about many many times.

The announcement comes on the heels of quite a little brew ha-ha.  For those unaware, one Martin Sargent decided to throw his hat into the ring rather late in the game.  Sargent is well-known to geeks like myself who spend our time frolicking around the world wide web on a daily basis.  Though he was admittedly unqualified to talk about the topic at hand, Murphy-Goode’s decision to exclude Sargent from their top 50 was met with quite a backlash (examples here and here).  I say kudos to MGW for not bowing to the pressure from people like Kevin Rose, Digg founder and Sargent fanboy.  I for one, am glad they decided to hand the job to someone who actually knows a thing or two about wine… but what do I know.

Anyway, enough with the negativity.  Congrats to Hardy, we’ll miss you and boy do we hope you return.  You can visit Hardy directly at his website, dirtysouthwine.com