Engine 11 is the latest tenant in the cemetery that is 30 North Ave.  Despite being within walking distance of Georgia Tech, the Fox Theatre, and a number of Midtown residences and hotels, this location  has been a death knell for all previous comers.  With a complicated parking situation and a busy roadside, any restaurateur that has taken on Fire Station No. 11 has had a lot of obstacles to overcome.

For those familiar with the space from its time as The Spotted Dog, not much has changed.  The awning over the patio is still there and the exterior furniture is still in place.  In fact, the only noticeable differences are the removal of the words “The Spotted Dog” and the addition of a small sign that clues you in to the new name.  It seems even less was done with the inside of the pub.  It seems the artwork was reworked and a few new flat screen TVs were put in place.

Mind you, that is not necessarily a bad thing.  The dark wood against the white brick walls help make this place a little more intimate.  Overall, it’s a comfortably odd mix of light and dark, with a tiled floor and high ceilings to boot.  I appreciate the fact that the owners didn’t go overboard by adding in a bunch of fireman’s kitsch. 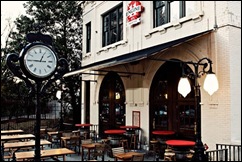 Now keep in mind that while this is a First Impressions review, I’ve actually visited Engine 11 a handful of times.  As such, what follows is a bit of a mix of the singular and the plural.  For example, I have yet to sample anything on the menu more than once. 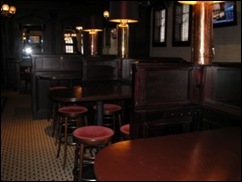 I don’t think there is much in the way of a hostess or a greeter.  Every time I show up, I usually just find a seat.  They might have a “seat yourself” post, but I’ve never seen it if it is there.  Beyond that, the service is passable.  Sure I’ve seen a drop off in attentiveness from time to time and I’ve seen an employee with a scowl; however, the employees at Engine 11 usually do an ample job of delivering your food and paying attention to what you need.

The menu itself seems dressy, but is pretty simple once you lift the skirt.  The apps section is a collage of selections from all over the place.  The wings were pretty forgettable, offering little in the way of direction.  I’d suspect the sauce was bottled and not made from scratch.  Offered up in a multitude of flavors, I’ve tried them all (in one sitting with a large group).  Overall, the sweet sauces were sugar intensive and the spicy ones lacked any punch.  The menu talks up the blue cheese chips and hummus quite a bit (and everything else for that matter).  Unfortunately, they do little to excite the palate.  The hummus seemed to lack the garlic they promise is in there and the blue cheese chips aren’t really a recipe so much as an assembly of chips and blue cheese.  The included scallions were pungent and off-putting.

The sliders, regardless of varietal, are acceptable, but don’t make you think.  The chicken was under seasoned and a little dry while the “Hawaiian Sliders” were so sweet I didn’t really have a chance to think about the meat inside.  One thing that I though was to be totally kick ass was the Cap’N Crunch.  Yes that’s right, just as the menu tells you – this is just a bowl of Cap’N Crunch.  I love the idea of chowing on something like that at a bar, but the $5.25 price tag makes it prohibitive.  Even so – I’m sure it’s just the Captain, so how could one screw that up?

As far as bar salads go, I’ve been reasonably pleased with my one adventure.  The Fireman’s Axe Salad is your basic chop served with chicken tenders.  I opted for grilled chicken.  Ample in size, the $9.49 price tag seemed appropriate.  The ranch dressing tasted like ranch, the cheese like cheese, and etc…etc…  The salad won’t win any awards, and can’t compete with anything put out by Houston’s, but it was alright.  My biggest complaint was with the chicken.  While cooked just right so as to maintain its moisture, the flavor of the chicken was overbearing.  The amount of zest on it really made my tongue curl up.  However, when surrounded in a bit of lettuce and fixuns’, I was able to down it with relative ease. 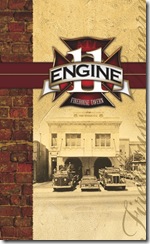 The remaining entrées are a cacophony of sorts.  Thematically, they are all over the place.  Individually, they are just your basic past and chicken dishes, burgers, sandwiches, and the like.  I haven’t sampled enough of them to direct you in one way or the other, but if the other menu items are any indication, there is probably some good and some bad here.  If you find my descriptors some what “reserved,” I’ll remind you that this is simply just bar food.  With some positives and some minuses, it’ll get you by.  It doesn’t need to be thought provoking, it just needs to be passable.

It goes without saying that the suds on file always play an important roll in the experience at places like Cypress Street Pint & Plate, The Book House Pub, or The Brick Store.  I suspect they are also important here at Engine 11.  However, as I’ve said in the past, I am admittedly unqualified to comment on the brew.  Now the liquor and wine … that’s another thing.  As one would expect, the usual suspects are here.  Nothing extravagant by any means, but if you’re into the hard stuff – you’ll be fine.  The wine list leaves a lot to be desired … however, some specials might make it easier for you to down a glass.  On Thursdays, you get house wine at $2 a glass.  In fact, there are every day specials that include $5 Ketel One drinks and $4 Captain Morgan mixtures.

The patio has some nice tables, but there are two major shortcomings for it.  First is that it’s street side of North Ave.  Second is that it sits next to a metered lot.  There is a speaker that voices some loud obnoxious message about paying and it seems to do so often, yet without any discernable pattern.  While I doubt there is much Engine 11 could do about the HAL-ian voice, it’s entirely possible that it will disturb you many times while you hang outside.  Thus, it’s a factor … just as the street noise generated by the screeching cars that whiz bye is.  Speaking of the parking, if they paid lot next door doesn’t do the trick, Engine 11 offers “valet” after 5pm.  It’s another one of those factors that doesn’t help their cause.

Crowds here are spotty, and as such, I’m not sure what the future holds.  While the building is clean and cool, the service and food are run of the mill.  While I don’t have any real frustrations with the place, the difficult location for many leaves me weary for the future.  If you live nearby, it’s certainly acceptable as a mix-it up and get out of your routine sort of joint.