Sometime in the past few weeks, Eastern Pearl Chinese Restaurant said adios to Midtown, Atlanta.  Shortly thereafter, brown paper went up behind the windows and a sign announcing the future plans for 239 Ponce De Leon Ave was introduced.

According to the sign, a Caribbean tapas restaurant by the name of Entice A is in the works.  I have no idea who is behind it, or when they actually hope to open.

In the meantime, one must wonder what’s in store.  Nearby restaurants include Top Flr, Mary Mac’s, MF Sushi Bar, Papi’s, and the always crap-tastic Old Spaghetti Factory.  While the price point and culinary offerings from those restaurants couldn’t be more diverse, that’s an awful lot of food options to compete with.  I’ll keep my ear to the ground on this one and update ya’ll when/if I get any substantive information on Entice A. 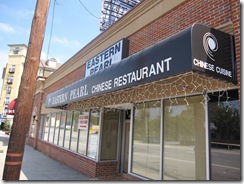