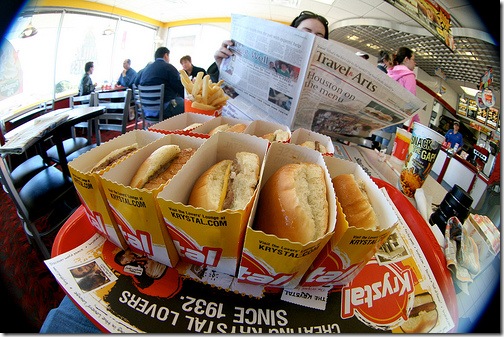 Fresh, Hot, Small, Square! Homer Simpson has seriously missed out.  I’m sure Krusty Burgers are just fine and all – but the idea that the American icon has been robbed of his chance to taste fast food bliss is nothing short of a crime.  That bliss comes in the form of a slider from Krystal, one of this country’s oldest fast food restaurant chains.  Strip away the politics, the caloric impact, and the pretense of food snobbery – and what we have here is a glorious, glorious item.  Nearly everything that comes out of this Chattanooga based chain has the potential to be purely awesome (though it doesn’t always happen).  Unfairly relegated to post-bash binges during the hours of 2am-4am, Krystal is an under appreciated gut busting experience.

I must admit that I’ve never ordered a breakfast product here, so I can’t comment on that.  However, every other fixture on the menu has hit my tongue at least 3 or 4 times during my life time.  In fact, that  usually happens in a given meal.

The stars of the show are these tiny little slivers of meat slapped between some bread and topped with mustard, onions, and pickles.  Like Kleenex, the term Krystal has become synonymous with the word slider.  Clearly geared towards those people with a propensity for salt, the mustard and pickles really help deliver a tart-like kick to a bite.  I must profess, the onions are a must, as is cheese.  A simple single solitary slice of yellow American cheese helps to round out the flavor.  Sure if you take a bite of the meat by itself, you’re bound to see it for what it is.  My suggested order is the double cheese Krystal.  As the name intimates, this is two singles, each with a slice of queso, stacked on top of one and other.  However, the top of one and the bottom of the other have been replaced with a thick cut slice of bread.  When the bread is “fresh” (yeah – i know – but take that at face value), the extra grain helps to sop up all the good steamed onion juice.  Subsequent bites are truly awesome. 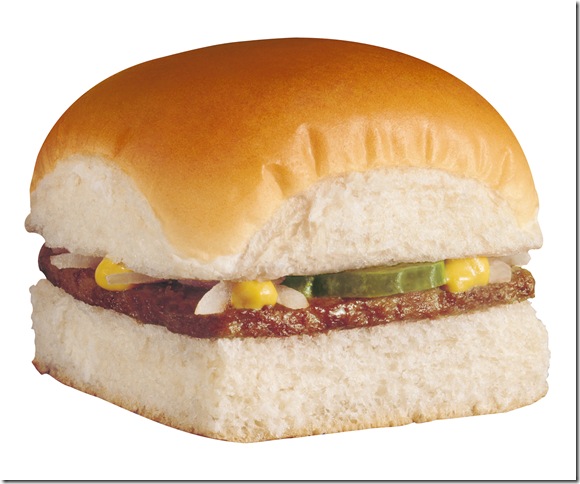 Meanwhile, a variety of other items are available.  The most popular are probably the chicks (think Chick-Fil-A meets the slider) and pups (mini dogs).  The dogs are to be ordered one way and one way only: covered with shredded cheese and a heap of meaty chili.  There isn’t much to say about these bad boys other than a bite is nothing more than a means to an end.  Specifically, it’s a great way to put large of converted fat into ones body as quickly as possible.  It’s gloriously greasy.

The chicks are no slouches either.  Many times during the year, corporate comes up with some sort of sauce or flavor additive to change the make up of these.  I don’t care for them like that.  However, when the Spicy Chicks are in play, they are an absolute must.  The Spicy Chicks are not to be confused with the Buffalo Chicks.  The latter are simply chicken sliders coated in a basic, fast food-esc, Buffalo sauce.  The former, are infused with a hint of Tabasco and have a slightly reddish tint to them.  If the spicy option isn’t available, I stick with the straight up version.  In fact, I usually forgo the cheese as it doesn’t provide a harmonious experience.  Fried chicken with cheese just doesn’t work.  Still, spicy or straight up – the crispy tender like pieces of chicken (or chicken substitute as it may be) is another savory hit when joined by the pickle, mayo, and bun that come standard with the order.  No doubles here!

The rest of the menu is peppered with things like the BA Burger (a full sized patty), chicken bites, salads, etc…etc..  I’ve tasted them all.  Many are fine, but it feels like a disservice to your doctor to come to Krystal and not order a slider (of some form).  Desserts and treats are also available, but there is never any room in this guy for that stuff. Every now and then specialty items show up.  These are sometime in the form of toppings (jalapeños) or in some new “mystic breeze” whatever that you’re supposed to drink.  They rarely jive with me.  Heck, I don’t even like adding bacon to my Krystals. 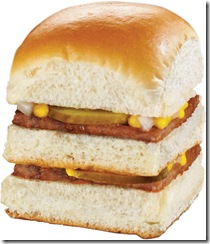 While primed for the title of most awesomeness of all the nation wide (or at least regional) chains, Krystal does have it’s problems.  Many of the locations seem to have a problem with the prep and service portion of the experience.  It seems like 10 minute waits at the drive thru are common place.  In addition, sometimes the bread will be a little dried out and “crusty.”  When that happens, the joy of the debauchery is very tempered.  I will say this for McDonalds, the food there always tastes the exact same because the ingredients are exactly the same.  Krystal seems to do fine with the consistency portion of our program outside of the bread.

As far as fast food restaurants go, the ambiance here is marked by strange patrons against a 50’s-esc sort of theme.  Given peoples propensity to dine here during odd hours, it’s no surprise that you’ll probably find yourself rubbing elbows with an eclectic group of folk.

So there you have it folks.  Don’t confuse them with the inferior version from up north (a.k.a. White Castle), these are some joyous little squares.  If it’s good enough for Takeru Kobayashi or Joey Chestnut, it’s good enough for the Foodie Buddha!  Lord knows, nothing would make me happier than the power to consume 103 of these in 8 minutes (that’s Chestnut’s Krystal Square Off World Record).

NOTE: I don’t remember where that first pic came from – if you know (or if it’s yours – please let me know!!!!)