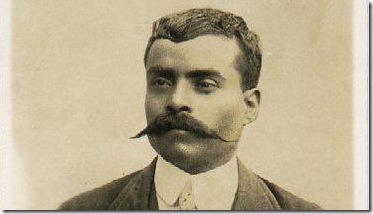 Stashed away in Downtown Norcross is a little Mexican restaurant touting the name Zapata.  Though the word translates as shoes to us gringos, the restaurant actually takes its name from Emiliano Zapata, a Mexican revolutionary.  Thus, it was predictably cool that the words “Revolutionary Mexican Cuisine” were scribed just under the name on our menus. Amongst those in and around the area of Norcross, there is a devout group of people who identify Zapata as as their go-to authentic Mexican restaurant.  However, as the slogan intimates, the menu is not really traditional.  Instead, Zapata finds its culinary roots in authentic Mexican fare; then, they take that idea, toy with it ever so slightly, and deliver a selection of goods ever so slightly outside the box.  Though you won’t find anything remotely close to a fried chicken taco, I’d say the selections offered try their best to be like something served up by Rick Bayless at Frontera Grill, his well-known Chicago eatery. When we arrived at 12:45, the restaurant was a buzz with eight or so filled tables.  Though there were plenty of available seats, we had to park it on the sidelines for a minute as a table was prepared for us.  With regards to the service, this was a sign of things to come.  Throughout our meal, things were just a bit off.  We were handled by two servers, though neither had any idea what the other was doing… it seemed as if they were fighting over us.  Each was extremely proficient and polite; however, when you have to tell two different people the same thing multiple times, it becomes a bit of a nuisance.  Further more, double the waiters means double the visits necessary.  I would suspect this was an anomaly, but it is still worth a mention.

As we attempted to navigate their lunch menu, a basket of chips and a cup of salsa showed up.  Complimentary to all patrons, the chips set a bad example of what was to come.  The chips themselves were thick on the corn, sharp to the bite, and suffocated the salsa.  Though there was something to like about the prominence of the corn flavor, the chips left my mouth dried out, regardless of whether or not the salsa was present.  Speaking of the salsa, it was perhaps the ideal representative of the meal as a whole.  There is no denying the freshness of the ingredients.  However, the execution failed most prodigiously.  The true undertones of a good salsa were there; however, the sugars were too prominent while the other spices hid in the dark depths of the bowl.

We thought it might be a good idea to see what their soups had to offer.  Though the weather made this an unwise decision, we defiantly ordered the Sopa Azteca and the Crema de Chile Poblano.  Any place that prides itself on having good Mexican food should have a good Sopa Azteca.  While there seems potential in Zapata’s take, ultimately, ours fell and fell hard.  The aesthetically pleasing presentation made it that much harder to accept the failures of the kitchen.  Ultimately, there was a distinct taste of tomato paste in each sip.  Though the avocado was fresh and prominently displayed on top, the remaining ingredients failed to drive home the intended flavor.  The Queso Fresco, which is most similar to a feta in texture, was there visually, but not in flavor.  Meanwhile, the advertised Guajillo pepper and Pasilla pepper flakes did nothing to spice the tongue. The Crema de Chile Poblano faired much better in our estimation and was probably the best complete dish we had all meal.  That’s unfortunate as it was nothing more than good.  The easiest way to describe it would be to say that the soup was simply a chile poblano in liquid form.  It was quite remarkable how much the flavors held up.  While the temperature outside made this an unwise decision, that is not why the dish failed to blow us away.  The thick consistency of the base didn’t mix well with the slices of bread that were dropped in.  The softness of that bread ran together with the thick texture of the soup to give you a mushy takeaway.  Meanwhile, the fat content was really upped a bit by the addition of shredded cheddar.  Ultimately, this would satisfy most if the weather warranted its order.  I was particularly disappointed in the absence of a cold Gaspacho that could have refreshed me. While the two soups were ultimately acceptable, the entrées were a step in the wrong direction, and a big one at that.  After a tableside switching of orders, I ended up with the Crepas Cholula while Sparky ended up with the Enchiladas de Mole.  Before I get to far into the crêpes as a whole, I want to draw special attention to the Picadillo contained within.  The Picadillo, which is a dish consisting of ground meat (beef in this case) and some breed of tomatoes, was top notch.  The mixture was fresh, well-seasoned, not to oily, and had a nice touch of chunked potatoes to round out the flavor.  I wanted to give special attention to the Picadillo because the rest of the dish went south quick.

Having been to Mexico 3 1/2 times in my life (a walk across the border was the half), I have never been privy to any cooking down there where the sauce was incorporated in as profound of a way as it was at Zapata.  Now Mexico is a huge country, and I’m not sure if certain regions are predisposed to heavier use of sauces than others, but the crêpes and the enchilada were absolutely swimming in sauce.  In both cases, this was a bad thing. Back on topic with the crêpes, the menu advertised a mild Chipotle cream sauce topped with sour cream and sprinkled with chopped walnuts.  The sauce itself was probably made using a hand blender as it was frothy and lack direction.  The mildness was profound and did little to evoke the palate in the way a good chipotle will.  Meanwhile, the walnuts showed up in short supply, if at all.  The crêpes were soft and the meat inside was stellar, but the excess of sauce on the dish made it difficult to enjoy.  Heavy on the sugars, I stopped 3/4 of the way through.

I had heard that the mole was destination worthy, and it was that reason alone that accounted for my drive up 85.  However, The Enchiladas de Mole were borderline disgusting.  Like my dish, the sauce was globed on like you’d expect if this were a gluttonous last supper.  Ample sauce is one thing, but when the enchiladas can be shoved around the plate like an air hockey puck … you’ve got problems.  A single bite of this Mole Poblano was so sweet that I nearly spit out my food.  Still, I poked and plucked, and tried to find something to identify as the single problem.  As I split open the casing, inside was a heap of moist chicken.  I took a bite and immediately thought I had found the culprit.  The chicken was so offensively sweet that I did spit it out (being the gentleman I am, I doubt Sparky even noticed this sleight of hand).  I went back to focus on the sauce, and much to my chagrin, it was equally as sweet.  The Queso Fresco reared its feeble head again, and the rice isn’t ever worth the words I just penned to bring it up.  In a shocking surprise, the refried black beans were dense and flavorful.  Set me up with an unfettered order of the Picadillo and some of those beans, and I would have left a happy camper. As we sent away more than half of what we had ordered, the two of us sat there lamenting the experience that we just had.  We both recognized the freshness of the ingredients, the thoughtfulness behind the dishes, and the complete failure of the execution.  While I’m sure I am being much harsher than my lunch date, we both knew there was potential there.  In a desperate act, we decided to give the quesadilla with Picadillo a shot.  Hoping that it would really show off the positive elements of our meal, we were sorely disappointed.  The liquid crema that showed up was watery and had little flavor.  The Pico de Gallo was quasi pleasant, as it was fresh but under seasoned, and the guacamole was shameful.  The lime juice was under utilized and so was the cilantro.  The true failure was in the quesadilla itself. Visually appetizing, it quickly started to fall apart as soon as I picked it up.  When I peeked inside, my instincts were confirmed.  The innards were awash in grease as the cooks utilized the Queso Fresco as the cheese of choice.  Instead of including a thicker cheese, they went with something soft and runny.  Bummer, because we both recognized just how good that Picadillo was.

These two specialties were most certainly failures, and so was the quesadilla.  Again, there are differences between things I like and things that are good.  Dishes that are well-executed are well-executed, whether I care for them or not.  All of our food from lunch had its failures. Speaking specifically to this one meal, it seems like Zapata has a long way to go before the quality of their food matches the lofty attempts of the menu.  The freshness of the ingredients, the prolific amount of communal love, and their six-years of history are the factors which *might* allow me to return.  However, as the drive up there is roughly 30-minutes from me, and there are a number of excellent alternatives (and places that I must try), don’t count on that return trip anytime in the next few years.