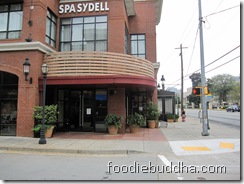 The hits just keep coming.  Though this actually happened a few weeks ago, I somehow managed to miss it.  Wolfgang Puck Express pulled an Emeril’s and said buh-bye to Atlanta.  This leaves the city with one less celebrity chef restaurant and the ground floor of the Brookwood Place complex dangerously close to empty (at least in the south building).  While the signage is gone and a closing note hangs in the window, the interior has remained pretty much intact.  Maybe another restaurant will go in … maybe not … only time will tell.  I have a few snapshots, but they are held hostage on my camera until a little later tonight.  I’ll throw them up when I have the chance.