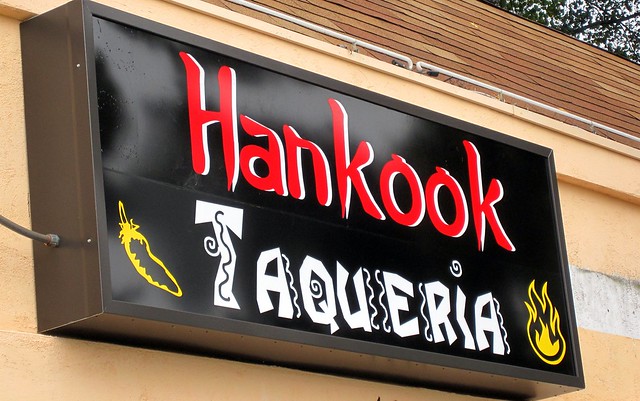 A lot of people have postulated as to why Hankook Taqueria, the one part Korean cafeteria and one part taqueria, has opened on the Westside.  Whatever the reason, the addition of a Korean inspired restaurant over yonder helps to expand the culinary landscape.  While there are a handful of establishments that serve Korean cuisine, not a single one of them is in ears shot of Hankook.  Further to the point, I’m pretty sure this is the first foray into Korean tacos in the ATL.  These facts alone make HT a valuable addition to the neighborhood, even if the food isn’t anything wonderful.

The man behind Hankook is Tomas Lee.  Lee, an accomplished chef, has already tried his hand as a restaurateur.  Unfortunately, his eponymous Tomas in Norcross and Wok-In Wok-Out in Lawrenceville are both a thing of the past.  Now this former Buckhead Diner executive chef finds himself much closer to the heart of the city in a very unassuming location.

Sitting toward the tail end of Collier Rd, Hankook has taken over the space previously occupied by Good Eats, which operated as a soul food meets lunch-line experience.  That restaurant was probably known more so for its location (that place on the way to Nuevo Laredo), than it was for anything else.  Though things have been kept in the family, we have a whole new concept to try.

Unfortunately, the concept has fallen on deaf ears with respect to the design and decor.  Nearly everything from Good Eats remains intact and unchanged.  The exterior of the building is still painted peach and includes the same awnings with dated “slogans.”  Of course, the new sign is in place.  Meanwhile, the interior doesn’t inspire any thought or hint at the cuisine you’re about to sample.  A long cafeteria station occupies the majority of the entrance area.  The register sits at the end and gives way to the main dining area.  There you’ll find roughly 10-15 booths and tables, all covered with a spice and herb inspired table cloth, a napkin tin, and the obligatory salt and pepper shakers.  The place isn’t divy, rather it’s the epitome of kitsch.  Clean and well organized, it may be as likely to turn you off as it is to turn you on.  However, let’s not fool ourselves.  The decor is a seemingly insignificant aspect of this experience.  If it remains intact, then so be it.  However, if they do spruce up the place just a smidge, it will go a long way to easing the tension.

We arrived right at the witching hour and the restaurant was all ready bumping.  This was in no doubt a result of the tweet love doled out by Eat It Atlanta (website) and a report on Thrillist.  Inside, Lee and his compadres rumbled about fairly haphazardly doing their best to keep up with the influx of customers.   We took our place in line, reeled off our order and moved on down as the dishes were touched off and finalized.  After a handful of mix-ups and confusing exchanges, we paid what we owed, located a table, and started our methodical charge through the massive quantities of food in front of us.

As mentioned, the menu includes a handful of traditional Korean dishes as well as several Tex-Mex alternatives whereby the traditional Mexican ingredients and flavors have been replaced by elements of Korean barbecue.  Nothing exceeds $6.25 in cost, making Hankook one of the more affordable lunch options anywhere.  It’s worth noting that as of this writing, they are only open during lunch hours on weekdays.  If you want to visit outside of that time, a phone call might be in order to see if they have adjusted that schedule.  Dinner isn’t supposed to arrive until sometime in late November/early December.

Back on track, Spark Plug seems to think that I am capable of keeping up with her bottomless stomach.  Though I am not, we still ordered all six of the “street snacks” and one of every taco, there were five in total. The snacks offered include mandu (dumplings phonetically spelled as Man-Doo), chop-chae (vegetable stir fry), duk-pokee (a Pusan fish cake), ko-kuma (tempura sweet potatoes), bibimbap, and naeng-myeon (spicy soba noodles).  All of these are $4 with the exception of the bibimbap and naeng-myeon, which are $6.  The latter two being sufficient to feed most normal people, especially for lunch.

Mandu is typically thicker than some of the dim-sum alternatives of cultures nearby.  These were no exception.  The thicker dumpling wrap housed minced pork, some scallions, and a distinct hint of ginger.  When dipped in the accompanying vinegar/soy sauce, you’re basically dealing with liquid salt meets protein salt.  Nothing about this tickled my inner foodie or made me sprout up in a fit of joy.  However, the dumplings, which relied on middle of the road pork, did their job and fixed my fix.  Half a dozen to an order, this was a good value, if nothing else.

The other street dish that left the biggest impression was the naeng-myeon.  This large plate of mixed veggies and soba noodles came nicely plated on a Styrofoam transporter and included a halved egg of the hardboiled variety.  As the name implies, this is a cold preparation and appropriately contained a good selection of julienned veggies.  However, this dish was far from the servings upon servings I grabbed when visiting my “Korean mom” while in college.  Though there are several varieties of naeng-myeon, I was always under the impression that the broth was an important component.  Here, the “red pepper vinaigrette” served more as a dressing.  Also, Soba noodles aren’t from Korea, and I’m not sure why they were used.  Whatever the case, I found the coldness of the dish refreshing and the bit of kick appealing, even if the flavors and ingredients did little to spark my interest. The rest of the “street snacks” were a bit more mundane.  Although, the duk-pokee was such a departure from anything that I have had before, that I am struggling to relay the message.  Is it worth a try? Sure, if you don’t mind being more experimental.  It was kind of bouncy and the flavor was fairly new to me … so proceed at your own risk.

With nearly everyone of these options available elsewhere in the city, I can’t say I was particularly impressed with Hankook’s take on any of them.  Far from great, though even farther from bad, these dishes seem best suited as an “alternative” to the other cuisines found in the area. Street snacks aside, I was really hoping for something special in the tacos.  The good news: I see a lot more potential in these than I did in the snacks.  Moreover, at $2.25 per, these have every potential to compete with the tortilla rockets served at the nearby Taqueria Del Sol  However, the bad news is that there was one ubiquitous ingredient that is a serious hindrance to their success at this time.  It’s worth noting that you apparently have your choice of Lettuce, green onion, green cabbage, and soy sesame vinaigrette OR yellow onion, cilantro, and lime juice.  Neither of us realized this, so we didn’t ask.  All of ours came with the first series of toppings.

To be honest, I don’t much remember the tofu taco.  I tend to recall that I wasn’t particularly drawn to it, and that is probably why my memory is fuzzy.  The saengseon jeon taco, aka pan fried fish, was pretty unnerving.  The fish itself was nothing more than a glorified piece of Gorton’s fish sticks.  Meanwhile, the Hoisin tartar sauce seemed downright wrong.  Most people will recognize Hoisin from their orders of Mu Shu at their neighborhood Chinese joint.  A sweet and thick sauce, I found the attempted infusion with the basics from a tartar sauce to be disjointed and unappealing.

The daeji bulgogi was revamped from a sliced pork dish into a pulled pork serving.  Topped with a “spicy Korean BBQ sauce,” I found nothing about the dish spicy and the sauce to be only loosely Korean.  For example, the expected hint of gingerroot was nowhere to be found.  It was extremely reminiscent of a pulled pork you would find milling around these parts at your basic barbecue stop.  Ultimately, the pulled pork might actually work for you, but unless the spicing was just a misfire for us, I’d suggest you pick something else.

In this case, I saved the best for last.  The chicken taco (dak bulgogi) and the beef taco (bulgogi) were both fine examples of their authentic Korean counterparts.  Though I’m concerned people might be adverse to the tendon-rich cut of beef used, and our chicken was a tad bit overcooked, these were pretty tasty.  The garlic, ginger, onion, and sesame were all on prime display and both the meats more than lived up to their $2.25 price tag.  Sure, there is better to be had … but these would have been pretty darn successful if not for one … really disappointing thing.

This leads us to the biggest failure of Hankook.  As it stands now, they are using not just flour tortillas, but bagged tortillas that seem to occupy the bottom rung of the quality ladder.  Being that the word taqueria finds its way into the name, this needs to be changed and changed fast.  People might want to point to the cost or any other number of reasons why the tortillas should get a pass.  I’m sorry – but they don’t.  For this place to sustain any long term success, this crucial ingredient either needs to be made properly in-house, or brought in from somewhere else that makes its own tortillas.

So as it sits, the quality of the ingredients and the selected preparations need a major overhaul before these samplings can be considered anything other than interesting.  Even the slightest upgrade in the tortillas would easily coax me back for some more of the beef and chicken tacos as well as a chance at trying a burrito (which is filled with Kimchi rice).

So does Hankook Taqueria it stack up against most of the Korean restaurants chatted up by Chow Down Atlanta?  Not really.  Am I glad that Hankook is open?  Absolutely.  Will it work in a pinch? Sure, why not?  Does this place have a long way to go before it’s worthy of the attention it’s already received? Sure thing.