If you don’t live in Decatur, there is a good chance that Mezcalito’s Cantina is one of those restaurants you can go a lifetime without trying.  In fact, I have driven by this Oakhurst restaurant more times than I can remember; yet, I have never entered its glass doors.  Though it doesn’t get a lot of attention outside 30030, the restaurant has had its share of media coups and remains a popular destination for nearby chicas y hombres craving some Mexican food.

In its previous life, Mezcalito’s operated under the name Billy Goat’s Cantina.  Having never visited before the other night, I don’t have any good information on the background of the restaurant or the name change. Whatever the case, Mezcalito’s finds itself near the restaurant-centric intersection of East Lake Dr. and Oakview road (aka Oakhurst Square).  Inside that two to three block area, Universal Joint and Saba seem to get the most attention.  However, all the restaurants there seem to draw a crowd and you’ll even find a Tex-Mex alternative to Mezcalito’s in the nearby Matador Cantina. 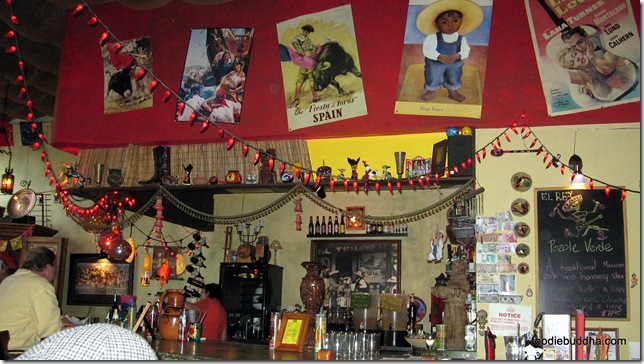 Armed with some sidewalk tables, a reasonably sized patio, and a lengthy bar, Mezcalito’s is equipped to handle a good number of patrons.  While it isn’t perfect for particularly large groups [we were eleven], the kitschy-hippy decor and relaxed atmosphere seems to implore you and your closest compadres to come chilax.  This atmosphere lends itself well to families with yutes, and even the littlest of tikes are welcomed.  That said, the liquor is plentiful – so proceed at your own risk my dear parental friends.

The food definitely finds its roots in Mexico; but, there are touches of Latin American cuisine emanating from the streamlined and easy to navigate menu.  The limited number of choices may or may not be a point of contention with patrons.  I am a self-proclaimed minimalist, and that trait means I find smaller menus appealing.  However, I do appreciate variety, and in that respect, I wasn’t blown away by the list.

In lieu of the usual “appetizer” section, Mezcalito’s offers up a short list of botanas, otherwise known as snacks.  Included in that list are maduros (fried plantains), a few dips, and some soups.   I didn’t have the stomach space to explore them.

The rest of the menu includes some quesadillas, some tacos, and two enchilada options.  The most extensive section was a list of “cantina classics.”  While the name was misappropriated, I was glad to find hand-rolled tamales, a chile relleno, and a few other odds and ends.  Though I selected the pulled chicken enchiladas from another section, the inclusion of the chilaquiles was a refreshing, albeit befuddling, option.  As the menu notates, chilaquiles consist of tortillas cut into strips layered with some goodies, and cooked kind of like a casserole.  In fact, the menu mentions the word lasagna.  Though it can be prepared for dinner, the dish is most often served during meals that take place in the AM.  Therefore, it may not surprise you that Mezcalito’s serves up a rendition with eggs during brunch (available on the weekends from 11a-3pm). 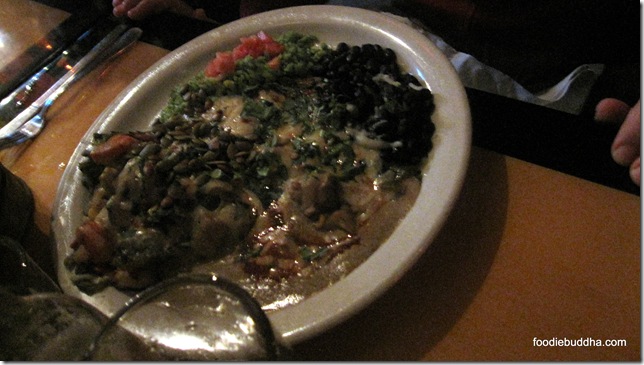 Though the lack of beef tongue, goat, and similar ingredients, left me somewhat lukewarm, I like the way the menu is laid out.  It’s easy to pick through and won’t intimidate you.

In addition to the already mentioned chicken enchilada plate, I ordered a steak taco and sampled some of the chile rellenos.  The most common thread amongst those dishes was their propensity to lean towards the bland end of the spectrum.  However, there were moments of flavor in each of the dishes and no major screw ups.

The steak taco included a hint of lime, a lot of juice, but no sign of the listed chipotle.  The wetness was a consequence of the au jus from the steak and the liquid from the tomatoes in the pico de gallo.  Though all of it was reasonably fresh, don’t expect farm to table quality.  The steak itself was under seasoned and the pico de gallo didn’t have a real powerful flavor, but when the lime juice showed up, I found the bites messy but satisfactory. The flour tortilla was PROBABLY not made onsite, and a little dried out, so that was disappointing on both fronts.  All in, the taco did the job, but was extremely overpriced at $3.95.

The chile relleno that I sampled was originally hidden below a mound of cheese and what appeared to be sunflower seeds.  The bite I tasted came across like a pepper in cheese, but it did not burst with with flavor.  Mixed in with some green mole sauce, I hoped for more … but wouldn’t have been pissed had I ordered it.  Though not a home run, it was a far cry better than that disgusting piece of who knows what that I tried to eat at Lupe Taqueria.

My entrée was an enchilada with pulled chicken & Monterey Jack cheese, tomatillo & red salsas, rice & beans.  True to form, the enchiladas were mostly bland, but did show hints of flavor depending on which scoop of sauce and cheese was included.  These flavors seemed most poignant at the finish.  The chicken was fresh, fairly well cooked (a smidge overdone in parts), and ample in portion.  The tortillas here were far better than their taco counterparts; but, they still tasted of offsite preparation.

On the side, you’ll found some a-typical rice and beans.  The beans were as straightforward as could be and neither impressive nor fault filled.  Meanwhile, the rice, which was a hot topic during the brief food discussions that took place, includes a puree of spinach, some cilantro and slivers of poblano peppers.  Given the list of included toppings, I was hopping for a flavorful and adventurous preparation.  Unfortunately, the rice was over cooked and somewhat gummy.  The purée did not help this matter.  Also, the balance of spinach and cilantro was off – leaving you searching for the leader.  It wasn’t helped by the diced tomatoes doled out on top.

If you’re wondering why I have made no mention of the drinks, it is due to the fact that I abstained for the evening.  While the drink options seem to be extensive, I didn’t even take the time to study the available options.  A cursory glance showed a handful of special concoctions.

It’s impossible to translate service for an eleven top into the daily routine.  However, it’s most certainly noteworthy that everyone of us, save for our late arriver, was served inside of two and a half minutes.  Liquor and beverages were continually filled, and our server was polite and competent until the end.  Our one late arriver was able to sneak in an order about 10-minutes after we ordered; however, his dish arrived just a few minutes after ours.  Whether that’s a good thing or a bad thing will depend on how far you want to take the analysis.

As it reads, you have a decent performance from the food, which falls just right of Tex-Mex, though not quite authentic Mexican.  Outside of the ridiculously price tacos (and the taco plates), this place is fairly reasonable.  You can probably get out for around $10-$13/head, perhaps less if you’re more frugal.

I can’t imagine that I’ll get a hankering to drive on down to Mezcalito’s; however, I’ll gladly go with some friends, eat my food, and move on without feeling exuberated or cheated.  While I highly doubt I’ll be able to make it back anytime soon, I wouldn’t be opposed to exploring the menu a little bit more.