Bone Garden Cantina, the Mexican hermana to The Vortex, has been chugging right along for the better part of the past 18-months.  A trip to this cantina will take you through a twisting set of roads, rows of single-story retail malls, and some newly sprouted rental complexes.  With a solid fan base, though no noticeable nearby office park, this restaurant is particularly popular with the lunch’n munch crowd.

Last week, four of us decided on an impromptu lunch excursion.  In need of something different, but not wanting to go too far from home base, we set off down Huff Road to see what had become of Bone Garden.

A self-proclaimed authentic Mexican destination, my first trip to BGC actually came sometime around July/August 2008.  That seems like eons ago to me, but the point is that it’s been awhile.  For the life of me, I cannot recall any single detail about my inaugural meal there save for the fact that it wasn’t enjoyable.  In fact, the experience was so underwhelming that I had a hard time remembering where it was when I went back recently.

Offset from the road quite a bit, and hidden in an industrial retail space, the only way you’ll know where Bone Garden is located is if you catch the guitar-toting skeleton sitting on top of a metal sculpture.  Fear not, it’s actually pretty hard to miss from Ellsworth Industrial.

You may have to meander a bit through the open-air mall before you find BGC, but there are a handful of tables in the walkway that will clue you in to its locale.  Those familiar with Mexican holidays will probably recognize the theme within moments of walking in.  At BG, every day is El Día de los Muertos (Day of the Dead).  Brightly colored artwork and humorously positioned skeletons line the place.  It’s touched off nicely by the tattooed servers, high ceilings, and a brick wall (which may be faux). If you frequent their sister restaurant, you’ll see an immediate connection in vibe.  However, Bone Garden is much more welcoming, and much more polished than either of the Vortex locations. Service here, like at the Vortex, seems to be hit or miss.  At times you’ll feel loved and adored, other times you’ll feel like you were sent to the corner for detention.  We were on the patio (err…sidewalk with seats), so take that into consideration.

The menu is an extensive laundry list of à la Carte selections.  While you meander thru the overwhelming number of options, you are presented with a complimentary order of chips and salsa. While it’s nice to see them not nickel and dime you for the c&s, the white corn tortillas and somewhat bland yet thick salsa are neither horrible nor wonderful.  BG makes up for the free chips by taxing you for every possible side item you can think of (see “Extra condiments”).  Frustrating to say the least.

What is apparent, even in the chips and salsa, is that the food here is fresh.  This should not be overlooked, as it seems to hold true throughout the menu.  Things that shouldn’t sit around simmering for hours on end don’t. We started off with some queso fundido con chorizo; however, we asked for the chorizo to be left out.  It was nice to hear that this was an option, it shows that the fun part of the dido is added just prior to execution.  Unfortunately, our server had a self-admitted brain fart and kept the chorizo in.  She made up for this in stellar fashion.  Moments later, she brought our vegetarian a complimentary order of queso dip so that he wasn’t left salivating over our grub 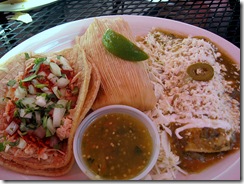 The fundido itself came with fresh peppers and a good helping of chorizo; however, I was really hoping to see a good bake job on the cheese.  Considering the excellent choice of Oaxaca queso, an ideal melting candidate, it could have been sooo good.  No such luck and what we were left with was a decent, but far from memorable order.  However, the charred flour tortillas that came with, while fresh but not handmade, were fairly tasty.  The comped queso dip was too sweet for my liking.  Additionally, it was a bit more runny than I would have preferred and I’d appreciate a more authentic take, per the sign on the door.

Though I had a chance to sample the chicken mole, my entrée was a do-it-myself combo.  Included was a chili de arbol taco with pollo ($3.00), a puerco angelito tamale ($3.50), and a desebrado de res enchilada ($3.25).  The enchilada was the clear winner of this group.  Though I won’t go so far as to call it really good, had that been the focal point of the meal, I would have left satisfied.  The tomatillo sauce had a nice hint of acidity, the corn tortillas were not overdone, and the somewhat dried out brisket was able to play nicely with the rest of the ingredients.  I would have liked to have seen a more pronounced presence from the meat, but when I harvested some extra meat for individual bites, I found everything just fine. The tamale and taco were another story altogether.  The tamale had been over steamed and became a big pile of mush at even the slightest poke or prod.  Dipping it in the tomatillo sauce helped, but overall, it felt like you were putting a piece of dried out meat in the middle of sogginess and going to town.  Meanwhile, my chili de arbol taco was an complete disaster.  The corn tortillas were very soft, and very “not good.”  They did not hold together.  Having sampled the flour tortillas earlier, I would suggest you opt for them if you go.  Meanwhile, the shredded chicken was definitely fresh, and definitely dry.  Individually, it did not appear as if it were seasoned at all.  Meanwhile, the chili de arbol was just bad.  Arbol chilies are long and slender and are primarily used as a spice additive.  I found the taco to have a good bit of kick, but the flavor was a disgusting woody taste that forced me to stop two bites in.

As I alluded to earlier, there were some good and bad parts to the service.  When they remembered us, they were on top of their game; however, there were several lulls throughout the meal.

Would i call this place authentic? Probably not in its entirety.  It certainly has a more traditional flavor than nearby Tex-Mex Nuevo Laredo.  While I still prefer the food there, BGS clobbers Nuevo in the freshness department.  The lack of a 60-minute wait also helps.  The food is fresh but not very good, and, the service is friendly but not very good.  The prices are high relative to the BuHi taquerias, and some of the individual items are overpriced (tacos), but overall the place is a fairly affordable excursion.  Though I’ll take my car keys and tote my ass up to Celia’s Carniceria every chance I get, Bone Garden Cantina isn’t a complete wash.