So today is the debut of Inside The Chef’s Kitchen.  If you want some background on the series, check out the introductory post from a few days back.

For our premier post, we managed to score some time with Chef Ryan Hidinger, the executive chef at Muss & Turner’s.  In addition to his role at M&T, Ryan and Jen, his much better half ;-), are in the process of starting up Staplehouse, a friendly little joint that they hope to open in the not too distant future.

In the interim, they are hosting “underground dinners” at their house under the name Prelude to Staplehouse.  You can check out all the happenings at the Staplehouse website.  And with that, welcome to ITCK. 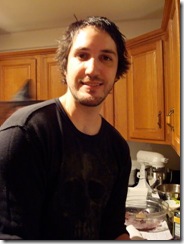 1. What is your favorite ingredient?
A: Changes all the time with seasons. I love tomatoes, but by fall I’m sick of them. I get restless with most food , if i had to choose pork, tomatoes and sherry vinegar to name a few

2. What is your least favorite ingredient?
A: Tofu

3. James Beard Award or Michelin Guide star?
A: James Beard…..the things you have to do to get a Michelin star are not things I am interested in(all the respect for those guys though, just not my cup of tea. Also, I’m convinced that a Michelin star in America is not the same as a star in Europe…its a shame.

4. What turns you off?
A: Apathetic restaurant workers….don’t make it so obvious that you are doing it for the money, it is the "service" industry after all. If you don’t love what you are doing in this business you will live a short life

5. What is your favorite curse word?
Fuck! it has so many contexts, it is versatile. joy… "Fuck that’s delicious! …….anger "FUCK!…… pleasure…"you get the picture"

6. What one item must you have in your kitchen?
A: Salt and fucking pepper!….see! there is another use

7. What one item would you ban from your kitchen?
A: Chef pants with chili peppers on them

8. What profession other than your own would you like to attempt?
I can’t imagine doing anything other than what I do, but I guess I have always had a soft spot for pumpkins. so I would be a pumpkin farmer, with all the haunted mazes and caramel corn a guy could ever want

9. What profession would you not like to do?
Grease trap cleaner….have you ever smelled a restaurant grease trap in the middle of an Atlanta summer…NO THANKS!

10. You are faced with the choice of selecting your last meal, what’s in it?
Pacific north west oyster, king crab swimming in butter, a bowl of well made chicken stock with some nice bread and butter, a couple spoons of mash potatoes with beluga caviar(equal parts), a little toro perhaps, tasty china’s pork in garlic mud, an In and Out "double double"burger and for dessert……. some wings from Taco Mac. I know someone is going to give a really beautiful story of there last meal, but what the hell, if my light is getting ready to blink, I’m finishing up with the good stuff!