Though their menus and vibe are extremely disparate, I could not help but draw some immediate connections between M+U and the nearby Abattoir.  First and foremost, just as Abattoir borrowed its name from the history of the building within which it resides, so too does Miller Union.  Next, the two both share an affinity for finely styled country decor.  Third, there is a particularly acute focus on freshly sourced ingredients.

While my introduction to M+U was not the runaway success that I had hoped, there are a number of reasons to smile after taking the time dine there.  A man date with Savory Exposure (website) turned anniversary trio, it seemed that all the members of “Team Buddha” walked away from our meal smiling and content.

Before I digress, let me apologize for the lack of original photography.  Dining with SE is a guaranteed trip in “out of my league” snap shooting … so I left my camera at home.  That aside, sometimes it’s just nice to enjoy a meal without having to pop out the camera repeatedly.

As you’ll see above, the Miller Union Stockyards were a part of the massive Artery complex that once canvassed the area near Howell Mill and Tenth street.  For all you history buffs, check out this website on what once was.  Just west of Howell Mill, Tenth intersects Brady … and that is where you’ll find Miller Union.  While the Westside is perhaps the most burgeoning spot in the city for high quality culinary adventures, I’m not entirely sold on M+U’s locale.  Though parking is ample, and comes with an unnecessary valet service, Miller seems destined to be a destination.  Rather, that’s what they will need to be in order to survive.  I doubt many people will take a stroll back down the highly industrial roads back there. 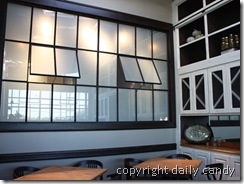 Still, walking into the quaint, intimate, and seductive space … any concerns about the location wash away.  After all, that’s not really a diners concern.  Though not everything that design firm Ai3 touches turns to gold, most of it does.  Here again, they have done a fine job.  Floor to ceiling windows make the space seem far bigger than its 3000-square foot, 70-seat setup.  Not but a step past the hosting stand  is a long wood bar backed by an impressive layout of glassware and what not.  It’s all desperately waiting for some happy/fun time drinks … as of this writing … there is no liquor license.  Though it might not warrant a second thought from most, the distance from host to bar seems a bit tight; and, that’s a theme that did stick its head out of the sand once or twice.  Meanwhile, the dining area is divvied up into three separate, yet unified dining rooms.  Barn sized doorways, high ceilings, a few mirrors, and a smartly placed interior window help expand the space far beyond its true size.  The one aspect that did make us feel pretty cramped was the poorly placed service station.  Hidden in one of the nooks, and not but an elbows length away from our table, we constantly had staff members leaning over our backs.  Hopefully, they’ll get a couple of TV trays, stands, or whatever, so the knives can be relocated.  It was a pretty significant annoyance.

That faux pas aside, the restaurants literally feels as if someone took a barn, polished it, and then gave it a refined, livable rework.  With soft lighting, touches of steel, and a dark palate, it remains like baby bears porridge …  not to warm and not too cold.

The menu, which comes courtesy of chef Satterfield, includes seasonally sensitive material, and offers a nice variety of proteins.  Though no more than 25 items deep from tail to toe, it seems to offer something for everyone.  Though you can expect it to change with the months, if it reads anything like it did for us … you’ll find a wonderful assortment of flavors and ingredients, while not being overwhelmed with a slew of unnecessary dishes.

Though the waiter made it sound as if the menu was designed for sharing, I cannot say I agree.  Don’t get me wrong, if you are with comfortable company (which I was), you’ll have no problem forkifying the plates from a multitude of angles (which we did).  Isn’t that the case everywhere?

Be that as it may, we selected the farm egg ($8), chicken liver mousse ($9), and croquettes ($5) as our starters.  The farm egg came poached in a celery cream.  You might mistake this for a soup if not for the massive slices of freshly toasted bread at its side.  The egg was cooked with precision and I detected a hint of truffle like flavors in the celery cream.  However, at $8 a pop … I was a expecting something more substantial.  Price aside, it was a better than decent presentation and execution.

The chicken liver mousse, served bowl style, was ample in portion, and exactly what it says it is.  Far too often, the words pâté and mousse are used interchangeably.  This was most certainly a mousse.  As such, it was creamy and soft, though not without the grainy texture one will find in a liver dish.  The toasted slices of bread were a little disappointing.  They were far to airy, so you often found the liver seeping through to your hands.  Additionally, a number of the slices came with nuts and such.  With a particularly sweet rendition of chicken liver mousse to go on top, this vaulted the sugars to overpowering heights.  Ultimately, it was a dish that did nothing wrong, rather, it did a few things “not right.” It didn’t live up to my pâté orgasm at Seasons 52, but with a minor adjustment to the bread, you’ll have everything you need for a competent serving.

The croquettes were easily the most frustrating of our apps.  In fact, they were far closer to Arancini (Italian rice balls) than they were to croquettes.  What you had were five extremely undersized battered balls.  The batter itself was soft and did not have the integrity to withstand the density of the innards.  The country ham was used too sparingly and did little to flavor these jawbreaker sized bites.  The mellow “butteryness” of the Thomasville Tomme blended perfectly with the flavor of the grits to produce a dinner friendly breakfast bite.  However, the pre-pubescent size issues, shortcomings of the batter, and absence of a punch the ham could have provided, left me underwhelmed.

Our entrées read as a carnivores delight.  Griddled Poulet Rouge ($19), beer braised pork shoulder ($21), and slow braised rabbit ($26) all found their way to our table.  The beer braised pork shoulder was the one distinct failure of the evening.  While I was neither turned off nor turned on by the braising, the meat was beyond dry.  The sauce itself didn’t seem to give the pork much direction; however, I suspect that if the meat had not been over cooked, the sauce too would have provided better depth.  Though the greens were sautéed just right, the sweet potato was meek and underwhelming.  The touch of brown sugar did little to help as it too was overdone.

Poulet Rouge is a specific type of chicken and it was a solid choice seeing as it was griddled.  I find they are a bit more flavorful and firm than their Cornish X counterparts.  Cornish X, for example, would work well as a chicken sandwich. You could tell that this bird lived an active life as the meat had the resiliency one gets from a chicken that roamed the land.  Still, while the peas (black eyed i think) and peppers were supremely fresh … the dish didn’t quite knock me off my chair.  It seemed to lack any real statement … ultimately … it just tasted like chicken. Well-executed and well-received, some minor tweaking could take it a long way.

Last up was the universally adored rabbit.  Served over a bed of mushrooms and grits, the trio of ingredients played beautifully in both texture and taste.  While the grits provided the grainy texture, the mushrooms (and the jus) helped the smoothly pulled rabbit slide right into my much appreciative belly.  Easily one of the better comfort dishes I could think of for a restaurant like this, it has real potential to be a home run.  The shortcomings were in the temperature of the meat and the price tag.  Though not apparent without obnoxious foodie investigation, the rabbit was dry.  Working away the sauce, the mushrooms, and the grits, you were left with a piece of meat that seemed to have rested a bit too long.  Though we all spent a good amount of time challenging our counterparts to a duel of the spoons, something about the dish left us unfulfilled.  We all quickly agreed that while the ingredients might dictate otherwise, the portion and price tag left us feeling about $7 too thin.

An admitted sweets and treats novice, I will say that I enjoyed each of our desserts (all of which ran $6/per).  The pound cake was buoyant and accompanied by sherried oranges.  The apple tart with house made ice cream impressed my sweet toothing buddies, and we all had a real hankering for the flavored ice creams.  Each accented with its own spice (one sage, one rosemary, and one thyme), each was a reminder of just how good simple, well executed dishes could be.  My one complaint was that the three scoops were served in a single bowl.  As they melted quickly, the ability to savor each flavor was lost as quickly as it came and the mixture was a bit of a bummer.  That’s an easy fix … so let’s not get too cranky.

Servers slink back and forth … all of them seem competent, friendly, and willing to go the extra mile.  Outside of the server station issue, this was a reminder of just how well a restaurant can do … even if they’ve only been open a few days.

While there were no runaway successes for me, the initial presentation was pretty damn good.  If they continue to build off the foundation that is in place, Miller Union, despite its somewhat secluded location, could easily end up as a destination worthy spot.  I look forward to the opportunity to make a return trip.  In the meantime, it certainly seems worth making a reservation of your own.