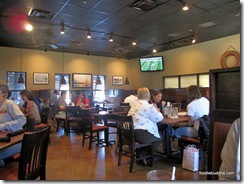 That’s where the joy in this bubbly establishment seems to run out.  I only had a chance to sample a few things, so it’s possible something on the menu is palatable; but I doubt I’ll ever be back to find out.  The menu reads like that of any basic chain restaurant, and the food tastes even worse.

The baked potato soup showed up and you could immediately tell it was simply squeezed out of a bag.  Still, it was passable.  The chicken salad sandwich was not.  It seems as if they took some shredded chicken, added in an ounce of mayonnaise, and then dropped in about 3 quarts of sugar.  Overbearingly sweet, I was done in two bites.  I had a similar action to the deeply fried steak fries as I did the the tater soup. 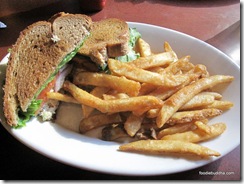 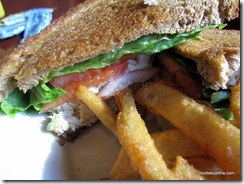 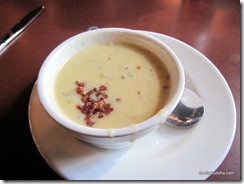 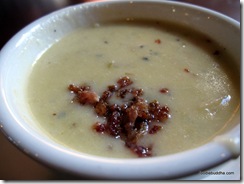 As for service … well … it didn’t help that they were short staffed, leading to one of the most drawn out meals I have ever bared witness to.  Though I was in no rush due to the topic at hand with my lunch buddies, it’s pretty sad that it took them 90-minutes to deliver two soups, three entrées, and a check.  I’m sure things are better when the staff is all there, simply because it has to be.  I didn’t care to point out to our waiter that there were at least four hostesses on duty who should have been able to help stop the bleeding.

I know that food isn’t the most important thing, but come on … there is a limit.  Though I’m distinctly unfamiliar with the surrounding area inside of a two-mile radius, I would hope there is a better alternative in the close proximity.  If there isn’t, I’d keep driving until I found something else.  I’d rather eat out of a dumpster than put anything from Coo Coo’s back in my mouth.  Hey, at least they got a facebook page