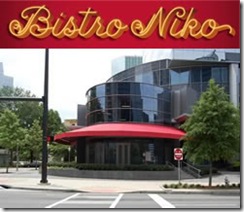 It appears that Bistro Niko, the newest venture from the Buckhead Life Restaurant Group, is a place to see and be seen.  Even inside of a few days, the restaurant is dotted with 40-something Buckhead Bettys, dapperly dressed 60-something business men, Francophiles, and a few other odd and end type clientele.  Somewhere in this mix, three yutes made their way over for an introductory meal.

The steady crowd is no doubt the result of a lauded reputation, some TV and press clippings (included in the notes), and a good bit of word of mouth traffic.  Powered by father son duo Niko and Pano Karatassos as well as executive chef Gary Donlick, the restaurant has set forth some lofty, yet approachable expectations.

Per the BLG name, the restaurant is nestled in the ground floor of the freshly polished Sovereign Building.  Buckhead at its best, the restaurant comes complete with large windows and a deep red awning that overlooks Peachtree.  It is clear that this restaurant isn’t for the casual diner, though the Karatassos’ are doing everything in their power to make the restaurant accessible in these difficult times. The decor is soaked in bustling elegance.  On your way to the hostess station, you’ll walk through the wine storage and then catch an eyeful of the glass cased kitchen.  Inside what equates to a large, white tile, high tech holding cell, a battalion of chefs, servers, and expediters busily prepare the food.  Meanwhile, you’ll see a number of hanging meat sticks on display.  To my delight, these were complimented by a quadruplet of fresh oysters standing proudly at attention.  Rotate yourself 180° to find a couple of smoking hot, well dressed hostesses tasked with leading you through the maze of red booths and tables.

On your way to the table, you’ll see sconces from French brasseries, snapshots of the owners during their international travels, chalkboard menus, and colorful artwork.  It truly screams Parisian styling, and so begins the start of a carefully thought out process.

The menu, which is scheduled to change with the seasons, reads like that of a contemporary French bistro.  Price wise, starters hover around the $7-9 range while entrées run just shy of the $20 price tag.  In comparison to F.A.B., that disappointing reincarnation of Brasserie Le Coze, prices are essentially the same.  However, there a higher concentration of more expensive options at the latter. Tactfully laid out on a single page, the menu runs the gambit of traditional French delicacies (rillettes, escargot, beef bourguignon, veal osso bucco) all the way to some small twists.  In that respect, you’ll find a ratatouille sandwich and a scary, yet intriguing “faux” gras.  Last but not least, you’ll find the requisite high dollar steak options and an always available prix fixe menu.  All this preparation sets the stage for the crucial aspect of the dining experience: the meal itself.

Milling through the selections at hand, I immediately jumped on a complete selection of the oysters.  For $22, we took down some Hood Canal, Malpeque, Blue Point, & Conaway Cups.  The lovely presentation came to us complete with a red wine vinegar sauce and some fresh cocktail/horseradish sauce.  Time and space prevent me from diving into the intricacies of each; however, two things were readily apparent.  Number 1: these were fantastically fresh and had every opportunity to be stunning.  2: Did they simply pull the first person off the street and task them with shucking?  Nine of the dozen ordered were filled with shells and/or grit.  This was amateur night at its best.  Shucking isn’t an easy job, and they need to put someone in place who is up to the task.  For those of you who are oyster neophytes, to get one oyster in a dozen that has shells would be considered an off night at any oyster bar worth its weight.  Still, the price point and freshness help to put places like Fontaine’s to shame.  Fix the shucking issue and you have a fantastic success.  It’s also worth noting that the four varietals did not match up with the listings available on the menu.

For our two other starters, we ordered the escargot “en croûte” and the aforementioned “faux” gras terrine.  The escargot was a traditional serving of shelled European brown snails lathered in parsley garlic butter.  Presented in a traditional escargot tray, each of our half dozen slippery slimy guys was crowned with a puff pastry (en croûte).  While all the ingredients were there, this dish ultimately fell a little flat for me.  Touched off with some Pernod, an type of absinthe, the dish carried an aromatic aura.  And while the snails themselves had been properly cleansed through a forced fasting, somewhere in the cooking process they were robbed a bit of their flavor.  All in, enjoyable … but I’ve had better here in the city.

I’m not sure why what we ordered was labeled a “faux gras” terrine.  It was explained in the details that you were getting a chicken liver mousse.  There may or may not be some confusion with regards to “is this a pâté or not?”  Let’s just leave that where it is.  Perhaps an attempt at humor, don’t get too hung up on the title … so long as you know what to expect.  What showed up was ceramic serving with a deep aspic-like berry jelly that hid the mousse.  The sweet against the savory wasn’t as pronounced as it could have been, but the mousse itself was well executed.  It was highly creamed and yet carried with it that touch of grit that one finds in chicken liver.  Neither a gold medalist, nor something to be sent shamefully to the Island of Forgotten Dishes, I wouldn’t fault anyone for an order.

The one aspect of the faux gras that was truly disappointing was the bread.  It was a problem we had throughout the night.  The slabs of toasted grain were difficult to eat to say the least.  Moreover, the tableside bread was as inconsistent as I’ve ever seen.  Not only did it seem to change in flavor and consistency, but there seemed to be no rhyme or reason.  I can only wonder how this extends to the sandwich portion of the menu.  For now, I can say that the bread seems to need some refinement before it can stand up to the baked goodness of elsewhere. For our entrées we took down the boeuf bourguignon, the lamb shank (not pictured), and the sole barigoule.  The lamb shank was the clear winner of the group.  Though it failed to light my culinary desires, it seems that this dish has already reached its apex.  The meat was so tender that it simply collapsed at the slightest forking.  Sandwiched between sliced apples, currants, and prunes on top and couscous on the bottom, all the while resting in a touch of jus, the dish clearly tries to play on the sweet and savory.  Though there wasn’t a thing “wrong” with it, it seemed distinctly underwhelming given the pomp of the environment.

I didn’t have enough time with the bourguignon to properly recap what was on the table.  It’s worth noting that Kobe beef cheeks were predictably tender and the flavors were pronounced.  Immediate impressions were that it wasn’t as lofty as the shank, but not a failure by any stretch of the word.

What was a failure, and most epically so, was the sole barigoule.  “God no, it smells like, like a used diaper… filled with… [baby] food.” [Yeah who’s with me?]  Not without its avid supporters, this dish tasted worse than it looked.  Rumors of roasted sole fillets were lost on me.  Then there was the purée with a deep orange hue and lopped in vegetables (‘chokes, carrots, onions).  It seriously looked and tasted like something put out of Gerber’s kitchen.  Still, the fish could have been properly cooked (it wasn’t – bland, mushy, dry) … and the purée could have had some life to it.  Move past this one post haste because unless they totally rework the dish, even an ideal piece of fish can’t save it. Sideline items included an order of pommes frites that got lost in the wilderness.  Rendered in duck fat and cooked 2x (1st @325° in duck fat then @375° in peanut oil).  The taste was nothing short of excellent.  If they are delivered on time, they have a chance to be as transcendent as a fried tater can be.  Oh yeah, there was a dessert … ask someone else, I’m not equipped.

Speaking of the delay o’ fries, service throughout the night remained a constant thorn in our side.  Pretty disappointing to see a restaurant of this ilk, with a legion of idle waiters in the dining room, fail this bad.  Our server was clearly under water with responsibility, and though he came with a smile and a great effort, his management team did not allow him the support he so desperately needed.  A little tweaking will go a long way.

Our wine for the night was a cab/merlot blend of Château Haut-Beausejour Saint-Estephe 2005.  Not a wow bottle by any means, it seemed to mimic the rest of our meal.  It was light on the tanins (that can drive some people crazy), mild in taste, and a bit lighter than expected.  However, the strong hints of non-acidic fruits blended well with our meat heavy meal.  A failure? Hell no.  But certainly not earth shattering. 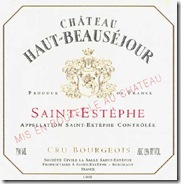 So where does this all leave us?  Well, there were some heavily flawed aspects to our meal (oysters, sole, service, crowd), and some successes (lamb, decor, cough… hostesses … cough [Hey, I’m a dude with a pulse after all!]).  Based on that one meal, the failures are more dramatic failures than the successes are winners.  If you follow, then you’ll be inclined to check it out for what it seems to be.  While I’m pretty stunned by some of the oversights, let’s not get too far ahead of ourselves.  After all, the good elements of the meal already surpassed what I’ve had at FAB since their change.  If you’ve got money to burn, then go take Bistro Niko for a spin (I’d recommend making a reservation).  In the meantime, we’ll just have to wait and see how this all shakes out.