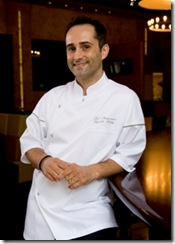 Something tells me that Cyrille Holota had no idea what was in store for him some years ago.  In the mid-90s, Holota was racking up quit the resume.  After cooking at several different Michelin winning restaurants (including 3-star powerhouse L’Arpege), Holota came to our beloved city to join Joël Antunes over at The Dining Room.  In 2001, JA left to open his namesake restaurant with Holota in tow.

From there, Holota began his methodical climb to the top.  He started as sous chef de cuisine, then moved to chef de cuisine, and finally, in 2008, landed on top as the executive chef.  Soon after, things got hairy, mostly for reasons well beyond his control.

In the past year and change, perhaps no Atlanta restaurant has been more maligned than JOËL Brasserie.  First, the restaurant’s namesake split for the bright lights of New York City.  Antunes’ tenure at the helm of the famed Oak Room was short to say the least.  Within a few months, he found himself out of a job.  Initial questions as to whether the Frenchman would shutdown his Atlanta restaurant were soon replaced with rumors of his return.  Then, the restaurant closed up for a bit (to remodel), leading to even more questions.  Just when things were getting back on track for the rebranded JOËL, they ran into that whole debacle with their liquor license.  Why do I bring this up?  Because so little of the bad press actually had anything to do with the restaurant and the experience within.

All this while, back in the kitchen, standing tall and proud, was none other than chef Holota.  The French national from Montlucon stood his ground and did so with a smile on his face.  Things around him blew up, and yet there he was, bringing his personality to the forefront of JOËL Brasserie’s food experience.

Now, the enduring character behind JB’s is here for a little relaxing, some quick wit, and a little bit of mystery (anyone know French?).  And with that, welcome to ITCK!

1. What is your favorite ingredient? I would have to go with lemon.  It adds freshness and body to many sauces, it adds life!

2. What is your least favorite ingredient? I love to work with it all!

3. James Beard Award or Michelin Guide star? Michelin of course! Where I’m from, the Michelin star is the pinnacle of success.

4. What turns you off? I am a clean freak, so anyone who works in this business and looks like a bum.

5. What is your favorite curse word? ”Putan, T’es con où quoi?” “Bordel” You really don’t want me to translate!

6. What one item must you have in your kitchen? My Apron and “MY” spoon.

7. What one item would you ban from your kitchen? Employees with long hair.

8. What profession other than your own would you like to attempt? Tennis, I am very good you know.

9. What profession would you not like to do? Accountant, I’m good with numbers but I would not like to sit behind a computer all day.

10. You are faced with the choice of selecting your last meal, what’s in it? A charcuterie plate. Lots of andouille with mustard and sautéed wild mushrooms.  For dessert: crème caramel with pain de gênes.

ITCK is a weekly series featuring an Atlanta area chef or culinary personality.  It is based on the Proust Questionnaire and inspired by James Lipton’s Inside The Actors Studio.  You can find all the posts here on FoodieBuddha.com by via the ITCK tag.  Also, you can follow it via twitter at #itck.