One heck of a weekend if you ask me … lots of football, lots of food, and lots of food news.  What else is there?  Here are just a few of the rumblings and grumblings that got tossed around this weekend.

Top Chef: Las Vegas Reunites In The Dirty South
Several of the contestants on Top Chef: Atlanta Las Vegas were seen in town this weekend.  The group, comprised of ATLiens Kevin Gillespie and Eli Kirshtein, included out of towners Jennifer Carroll, Bryan Voltaggio, and Mike Isabella.  The gang was spotted at the Falcons game sucking down some buzztastic grub from the new “it” barbecue joint … known round these parts as Community Q.  Speaking of which, I grabbed a meal there last week, and I’ll definitely share in the next day or so (if not sooner).

The fun didn’t stop watching our beloved birds get tarred and feathered.  To get the full Atlanta experience, the kiddos spent a good amount of time sampling ATL’s food.  They took a  trip to Flip Burger Boutique to see TC alum Richard Blais, to Holeman & Finch for some libations, to Pricci, and to each of TC:LVC Atlanta restaurants. UPDATE: Atlanta’s best BBQ blogger was kind enough to recap the events on his blog, pictures and all!  Enjoy! 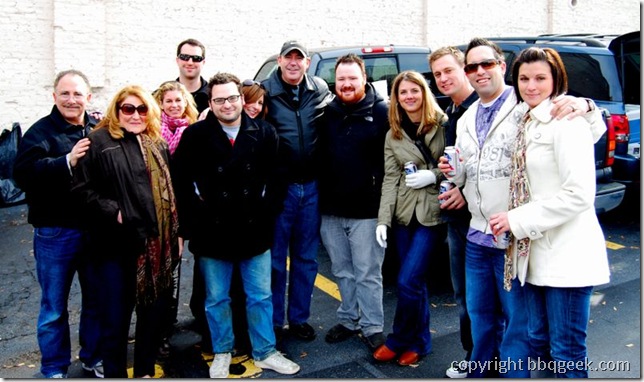 Holeman & Finch To Open Liquor Store
Speaking of H&F, long-standing rumors seem to be getting a little more traction.  Several “reliable foodies” have mentioned that the group behind ATLs most notable “gastro bar” are going to expand into the liquor store business.  All signs point to Bottleneck as the name of the establishment.  Andy Minchow, one of the proprietors of H&F, is scheduled to take the reigns.  For all you mixologists-in-training, this will most certainly be your store of choice.  The former Repast barista will be there to help you with recipes, ingredients, and drinking gadgets.  Atlanta’s masked videographer Rowdy just posted a clip of Andy … check it:

Some Bar In Some Place Opened
Some people just don’t “get it.”  They somehow take the idea of underground coolness and screw it up by going the snobby/elitist route.  Here’s what I’m talking about:

Everyone wants to be “Milk & Honey” but no one has the balls (or apparently the brains) to actually pull it off the way M&H did.  A bar hoping to copy take inspiration from the NYC underground destination is doing its best to do everything Milk and Honey did not.  It starts with the press release.

In this waste of digital paper, the owners were kind enough to provide the name of the bar.  Then, they told you what area of town to find it (no specific information – just a generic address – it’s a phone booth of sorts btw).  Oh, last but not least, they were nice enough to give out the name of their master mixologist (which everyone in the foodie circle already knows).  The cherry?  There’s a password to get in.  However, they won’t give it out.

One of the reasons why M&H succeeded is because they played the game.   They weren’t pretentious about what they were, and they didn’t try to have their cake and eat it too.  This establishment seems to want its feet on both sides of the line.  Not gonna happen here … You want to put out something in a press release … than do it … but don’t half ass it.  As such … not even a name mention from yours truly.  If you’re reading this and don’t know the story behind Milk and Honey … feel free to email me and I’ll elaborate.  And if you’re dying to know what I’m talking about … search some of the more notable food blogs here in town … you’ll find the 205.5 without too much difficulty.  They have a website already and … of course … A FACEBOOK PAGE!!!!!!  The website actually tells you where it is.  Grrrr …