Hot on the heels of the much more fashionable, Fünke and I took a little ride to the just opened Tuk Tuk Thai Food Loft, a Thai restaurant in the former Taurus location.  Backed by the familial lineage of Nan and Tamarind Seed, daughter DD Niyomkul has taken the helm of the kitchen (and the restaurant) in an attempt to offer a “casual” experience powered by authentic Thai food via small plates.

You may have noticed the quotation marks encompassing the word casual.  Most every press piece and notation that I’ve seen on Tuk Tuk mentions the casual nature of the restaurant.  While the vibe here is far from the tie-wearing atmosphere of Il Mulino, it’s not any closer to that of the flip-flop and jeans places that dot our cityscape.  What you have is an elegant room that banters back and forth between the intimate date night and the more friendly “scene” spot.  To put it another way, Tuk Tuk is Buckhead casual, not BuHi casual. 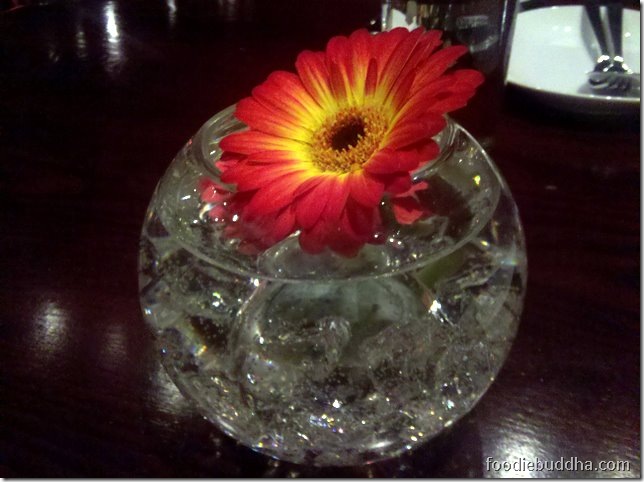 Entrance into the restaurant immediately plays on the informal aspects of the experience, and muddles them at the same time.  A Tuk Tuk, that being the little taxi from their native land, proudly sits on display.  A short elevator ride up two-stories gives way to an elegantly laid out hostess area which bleeds into the sprawling arena that is the dining room.

This dining area has been heavily redone since its predecessor called it quits.  Now you have a refined room with heavy browns, clean tables, and small dots of artwork, some of which are quite playful.  A full bar lines the front wall and the open kitchen blends in towards the back of the space.  I call it stuffy casual.  It’s quite nice and very enjoyable, you just have to know what to expect. [Best I could do here and here]

Greeted by a delightful hostess sporting a traditional silk dress, and welcomed by the friendly and informative bartenders, we were shown to our seats post haste.  They were not the least bit busy, so it was nice to see that they didn’t dump us on top of one of the other groups already seated.

Soon after, our server showed up complete with a prescribed traditional Thai greeting.  It seemed as if she forgot to do it and had to remember to sneak it in there.  As time goes by and the heavily national staff gets more accustomed to their roll, that this will be a nice little touch to the meal.  As of now, it may be a bit awkward … don’t give it a second though because it’s cool (or at least will be)!

Service throughout the night was über friendly if not a touch overbearing.  The latter was most certainly understandable, there was a good bit of staff on site and not enough for them to do.  While we were helped by a bevy of people, it’s hard to judge how this system will develop if/when the restaurant starts kicking on all cylinders.

While some of the servers were not well versed in English, they were all extremely friendly and put forth every effort to make sure we were happy.  They brought by chopsticks without being asked, kept the water flowing, and gladly provided menu commentary when provoked.

Speaking of that menu, it is chock-full of small plates and Bangkok street noodles.  The small plates all hover around the $9 range, the noodles are $14 (one is $13), and the four entrées average just around $15.  Give the portion size of the latter two options, it just isn’t that cheap.  Again, this is more about the branding of the restaurant.  If the average ticket here is around $40 all-in, I’d say that’s reasonable based on the circumstances.  Just don’t expect a cheap eat and you’ll be fine.

Still, being that Fünke and I are the most avid of diners, we wanted to check out the landscape.  Four small plates, one street noodle, two desserts, and three vodka t’s later … our bill sat at around $105 before tip.  While I left satiated, I know several people that could have consumed that meal by themselves and still have been hungry.

Prone to long deliberations about what we want to eat, Fünke and I bought some time with an order of Moo Yang ($11).  The flavoring of these skewered pieces of pork definitely drifted toward the sugary soy end of the spectrum.  Hints of pak chee (cilantro) helped make these bites reminiscent of what I like to call “dessert appetizers.”  However, Moo Yang is traditionally served with sticky rice, a fact later confirmed by DD during her friendly “hey, how you doing?” session, and there was none to be found.  It clearly intentional, but they should probably start to include it on the serving utensil.  Speaking of the serving apparatus, this is one of the more “fun” dishes you’ll have a chance to sample.  Six pork cuts come racked and ready for your consumption like your favorite kinetic motion toy

.  Just be careful, I think the skewers themselves were purchased from “Suicide-R-Us”; you could easily impale yourself with a slip of the elbow. A little pricey, and definitely after the sweet tooth in you – this was so much fun to eat that I think it should be required. 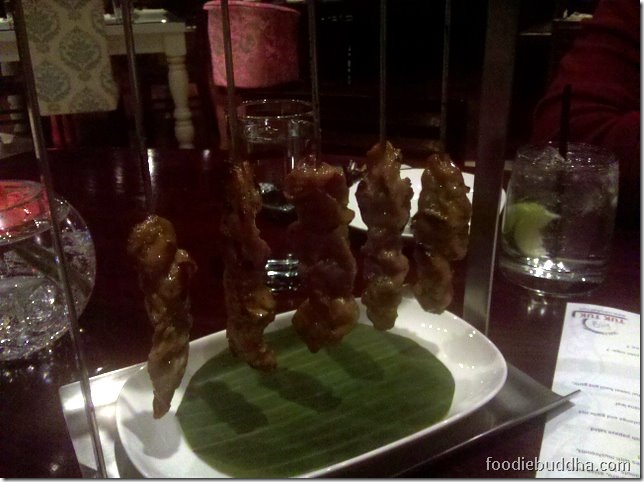 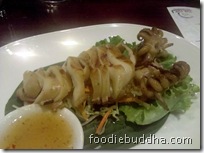 The pla muk yang was the least successful dish of the night.  While calamari is by nature chewy, this rendition was pervasively so.  The prepared chili sauce itself did not blend the lime tartness with the sugars, and the resulting bites, texture aside, were a bit too disjointed.  The remaining two samplings fared much better.

I really enjoyed the soft kick provided by the protein inside our sala pow.  While the menu hinted at a varied selection of ingredients, each was filled with an identical pork mixture.  Still, the buns were well steamed and the pork, which suggested oyster sauce (though don’t quote me on that), were solid.  Not an earth shattering dish by any standards, these will satisfy.  At $9, they’re overpriced, but we’ve covered that haven’t we? 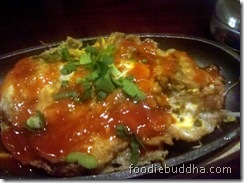 Though Fünke was initially adverse to the hoy tod, she placated me and helped out with the order.  The crisped egg included mussels, scallions, some cilantro, and perhaps some tapioca flour.  Meanwhile, it was served over bean sprouts and topped with a fairly sweet chili sauce. The resulting crisp was a textural pleasure, which helped overcome the sugary nature of sauce.  Sauce aside, the balance of egg to seasonings, spices, and mussels satisfied my belly quite well.

The ba-mee moo dang followed in this thinking with the egg noodles, bbq pork, peanuts, scallions, cilantro and yu choy (leafy greens).  It was nice to hear the server explain that the dish was to be mixed tableside.  Glad to see they look out for the less experience diners.  The noodles themselves were spot on, the pork was tender and understandably sweet, and the crunch of the peanuts helped make this an adventure in texture.  Spice was nowhere to be found, so we added a heaping of pepper flakes the server brought to us.

To wrap up our meal, we settled in on the fried banana and the tapioca for desert (all desserts are $7).  Though not a connoisseur of the end of meal treats, I do love a fried banana.  There wasn’t much inspiration here, just a straight forward scoop of ice cream and a lightly battered ‘nana.  The tapioca beads were a float with cubes of taro, coconut, corn, and a scoop of ice cream.   If you’ve spent any significant time with Thai cuisine, this will be pretty straight forward.  It is however, definitely worth a try.  The sweet pop of the corn against the tapioca balls is fun, and the potato hints from the taro texture can invoke a deeper thought in most diners.

So yes, the food is a bit over priced, but it has been prepared with care and heart.  The staff is approachable and friendly, albeit difficult to converse with at times for those of us not fluent in Thai.  The dishes all seem to play it safe, but the flavor profiles are solid and the textures made our meal quite interesting.  I’d like to see some more forceful use of spice where it should be and a little less sugar at times; however, this was a pretty strong showing for a first time experience inside of two weeks.

The messaging could be a little refined, but this isn’t fru-fru eating, so let’s not get carried away.  If nothing progresses, Tuk Tuk will be at worst a nice mix-it up establishment, so far as you can swallow the hefty price tag.

[Note to all you Apple Slaves: My crappy photos come courtesy of my Droid! … It has Me!]