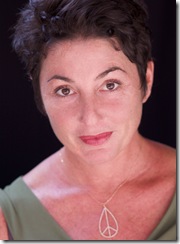 It’s getting darn cold out there, so what better way to ease the pain of the dropping thermometer than with a visit from Jenny Levison, Atlanta’s soup queen.  [Errr… well, the conversation is nice … but actually, her soup is what will actually do the trick].

Levison’s Souper Jenny has long garnered the attention of the Buckhead dining scene.  However, that notoriety extends beyond the scope of the 30305.  In fact, in the recent Best of The Big A series, AJC readers named Souper J’s the best soup in the Dirty.

On most any given day, you’ll see SJ cavorting around her shop with a carefree and friendly manner.  Meanwhile, she manages to put together some very cool underground dinners, get on national TV (video below), and put out a cookbook.  Oh yeah, she tweets as well!

She took the time to answer our little questionnaire, and in doing so, Levison’s approach to good tasting, straightforward food really shines.  Jenny has been swinging a ladle since ‘98, so like they say: “The woman knows!”  Alright, take a few minutes out of your day and check her out.  And with that, welcome to ITCK!

1. What is your favorite ingredient? Garlic

2. What is your least favorite ingredient? Corn Starch

3. James Beard Award or Michelin Guide star? In my next life

4. What turns you off? Constant complaining

5. What is your favorite curse word? Mother fucker said only alone and in my car!

6. What one item must you have in your kitchen? My super charged hand held immersion blender

7. What one item would you ban from your kitchen? iodized salt

8. What profession other than your own would you like to attempt? Broadway Dancer

9. What profession would you not like to do? Cleaning grease traps. I see first hand what they have to do! Yuck!

10. You are faced with the choice of selecting your last meal, what’s in it? Perfectly roasted chicken, Garlic mashed potatoes, sauteed green beans, caesar salad and S’mores for dessert!

Souper Jenny on The Today Show

ITCK is a weekly series featuring an Atlanta area chef or culinary personality.  It is based on the Proust Questionnaire and inspired by James Lipton’s Inside The Actors Studio.  You can find all the posts here on FoodieBuddha.com by via the ITCK tag.  Also, you can follow it via twitter at #itck.