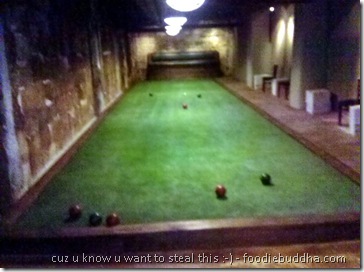 While stumbling around the Westside on Saturday night, Noodles, Dallas, and I stuck our heads in over at Ormsby’s.  This place seems ripe for success.  We all know that the Westside has exploded over the past 12-months.  However, with the army of new establishments that have show up, not a single one of them went the route of the neighborhood bar. That’s about to change with the imminent opening of Warren Bruno’s Ormsby’s.  It isn’t open just yet … but we got a little tour of the über cool space.

Upstairs is the sit down and eat section of the bar.  Approximately 2,500 sq feet is split between the kitchen and the public area.  There will be a little couch lounge for chilaxin, while the booths that line the brick walls will soon have inlay checkers and backgammon boards … UMM … AWESOME!!!!

Downstairs is 3,000 sq feet of pure unadulterated kickassness (yes that’s a word).  In addition to a drink stand, there is shuffleboard, darts, pool, and a video game cabinet complete with 41 games of childhood treats.  There are a few other cool surprises for you, which I won’t ruin; however, the coolest of the cool is the bocce ball court [ABOVE] in the back of the space.  Let’s just say Buddha tested … Buddha APPROVED!

While I sat there all giddy, Noodles confirmed that the draft and bottled beer selection should keep you beer mongers happy.  Meanwhile, Mike Guut told us that they will have a full array of libations for those of you like me … who lika da sauce.  I’m not 100% sure when they’ll actually let people in, but it seems that by next week, you should be able to walk in and enjoy the fun.