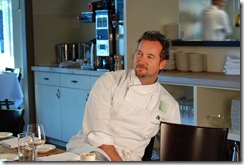 Chef Shaun Doty has long been at the forefront of the Atlanta dining scene.  For the past three-years, he has been the man behind Shaun’s Social Club.  Before that, he headed up things at establishments like Table 1280 and MidCity Cuisine.  Now, he’s primed to open the city’s next burger joint, aptly named Good Burger.

Doty maintains his cool while putting out straightforward, ingredient driven dishes.  Friendly and approachable, the chef has taken the time to step out from behind the burner to drop in here on Inside The Chef’s Kitchen.  In it, he professes his continued love for a particular rendition of fried chicken, manages to sneak in the word “wankers,” and declares … why settle for one when you can have both?  Alright y’all, let the good times roll!  And with that, welcome to ITCK!

1. What is your favorite ingredient? Sweet grass dairy Dante

2. What is your least favorite ingredient? buckwheat kasha

4. What turns you off? constructive criticism, does anybody really like it?

5. What is your favorite curse word? cunty

6. What one item must you have in your kitchen? vita-mix

7. What one item would you ban from your kitchen? long tweezers are for wankers

8. What profession other than your own would you like to attempt? brick and tile mason

9. What profession would you not like to do? anything corporate

10. You are faced with the choice of selecting your last meal, what’s in it? Scott Peacock’s fried chicken. then I can die happy!

If Martha loves it, mustn’t everybody?  Here are the deets: