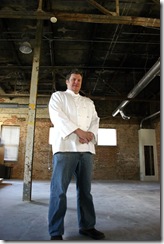 I know … I know … many of you were up in arms … angry, confused, and disappointed.  This past Friday, you woke up, grabbed your morning coffee, and opened your browser intent on seeing yet the latest installment of Inside The Chef’s Kitchen.  But alas, nothing was there and so hearts were broken, children were fire bombing, and the world was not at peace.  Well, something else was going on, so I took a few days off.

And so on this particular Monday, we have a special edition of ITCK to compensate for my indiscretion.  As the series concludes its second month, we have yet another stellar participant.  Enter Jay Swift of the quasi-eponymous 4th And Swift.

1. What is your favorite ingredient? Bacon

2. What is your least favorite ingredient? Tarragon

4. What turns you off? neurotic eaters (oooo, my potatoes are touching my meat)

5. What is your favorite curse word? fuckstick

6. What one item must you have in your kitchen? Coarse kosher salt

7. What one item would you ban from your kitchen? Black Chef Coats

8. What profession other than your own would you like to attempt? Ninja

9. What profession would you not like to do? Government work

10. You are faced with the choice of selecting your last meal, what’s in it? A pistol and a metal file

Alright y’all, that’s all for now.  See you later this week!

ITCK is a weekly series featuring an Atlanta area chef or culinary personality.  It is based on the Proust Questionnaire and inspired by James Lipton’s Inside The Actors Studio. You can find all the posts here on FoodieBuddha.com by clicking here.  Also, you can follow it via twitter at #itck.