Nestled in the ground floor of Morningside’s Belvedere building, Amuse has taken shape as a pseudo French bistro.  Now the tenants of the shuttered Allegro space, Amuse comes backed by Andy Alibaksh (via  Diem Restaurant Group) and Arnaud Michel (of Anis restaurant).  The duo brought in a fresh staff, hired a known chef (Lenny Robinson), and let him come up with a playful menu.  But like so many before them, this “accomplished” set of restaurateurs seems to imagine dreams that just don’t become reality.

I’m lucky in that I have yet to get a serious case of writers block.  Instead, I’m usually smothered by writers apathy … or whatever you may call it.  Recently, this has been complicated by experiences that have left me a shell of my former self.  Something about me was off … had I become soft?  Had I succumbed to the whims of beautiful women? Was all not well in the life of Foodie Buddha?  Maybe … maybe not.  Regardless, thanks to a recent pep talk courtesy of Spark Plug … I’m back.  Well, actually internal motivators aside, the true culprit here was the meal at Amuse.  After several weeks of quasi uneventful dining, this little bomb blew me strait to heck … and it took a couple of my friends with me. 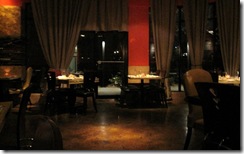 There is a reason why Tony, who has traveled the world far and wide, has yet to bring his No Res party and play to this town.  We’re thin.  While we often wonder just how well our big hitters really hold up against the national competition, much of this failure is on the hands of the ancillary establishments that have sprung up.  These second level restaurants (Bocado, Joia, etc…), are run by people who should be able to hand you a nicely laid out experience and provide you with a solid meal that does as well on the pocket book as it does on the taste buds.  No city should justify its culinary credentials on the heels of pop culture television, but the point still stands.

So here we find ourselves at one such establishment.  Touched by the hippie-friendly oddness of belt covered wall panels and a deep palate of browns, Amuse has the type of decor that seems as likely to comfort as it does to fall by the wayside.  For me, it’s a non-factor in its current form.  There are just too many problems with the menu, and too many hiccups in our single shot of service, for me to even begin to worry about the chair my butt was tied to.  Had I known what was to come, I would have thrown down some dollars, jerked my gaysian duo (that’s one part gay Cubby and one part Asian Lilly), and made a dash for the door before we even sat down.

Suggestions that this menu is bistro inspired are a stretch.  Culinary hints of French food are there no doubt, but so too are tacked on remnants of imitation farm-to-table cuisine spread around odds and ends from several different areas of our Google-fied globe.

Had things been pulled off successfully, the menu would actually stand up as playful.  Instead, it’s lost.  Though he forgoes some of the truly experimental elements found elsewhere, chef Lenny Robinson has attempted to touch each dish with twist or a turn.  Elements such as candied pistachios, cola marinades, and hints of mint set the stage for an inventive meal.  Unfortunately, the twists are too one note (sweet), the flavors are muddled, and the execution was anything  but ideal (during our one meal there).

The appetizer selection currently runs about twelve options deep.  The vast majority call $7 home.  However, a sampling of cured olives goes for $4 while a few options go $10 and above.  Our selections were the roasted cauliflower with pecorino, candied pistachios, and oregano ($6) as well as the crisp pork belly with Napa cabbage, apple, avocado, & yuzu ($8).

The cold mush of the cauliflower was both bland and off-putting at the same time.  Texturally, it was like grainy mashed potatoes.  The pecorino was undetectable, the candied pistachios added an awkward sense of sugar, and the dish left me worried for the inspiration.  It’s definitely not a dish that plays it safe, and with great risk comes great failure.  The pork belly did little to assuage my apprehensions.  The inclusion of apples and avocados was a palate clashing failure.  The texture of the dish could have been a real victory, but the cooked slab of Porky was so dried out that you were forced to tear your pieces.  Both dishes ultimately fell under the “over though and under delivered” category.

Entrées continued down this path, but with one major caveat: price.  As value friendly as the apps seemed, the entrées put an unreasonable pinch on the pocket.  The lamb burger came topped with yogurt, harissa (a hot red pepper paste), and cucumbers on a ciabatta roll ($12).  I almost chuckled when our server asked Cubby what temperature he would like.  Sure enough, the requested medium rare burger came about 25° over cooked.  I did not taste a sampling, but even my self-admitted “non-foodie” friend was less than impressed.  When asked if there was a kick to it, his response was: “Is there supposed to be?”

Lilly’s pan fried Carolina bass was probably the most straightforward dish of the evening.  Served over potatoes, and topped with some arugula, it seemed a stretch at ($16).  This was such a failure on so many levels that I don’t know where to begin.  Nothing worked and nothing was well-executed.  Whoever was responsible for quality control missed the boat on this one.  Stepping outside the foodie analysis, I’ll leave it at this: the fish was dryer than the Sahara.

I’m a lobster whore, so it didn’t take me long to settle in on an order of lobster tagliatelle with oregano, chile, bottarga di mugine (grey mullet fish roe), and chive flowers ($23).  One the one hand, this dish was a steal.  Bottarga di mugine and lobster are not inexpensive ingredients.  On the other hand, this was a fleecing of epic proportions.  The bottarga was next to impossible to detect.  That’s hard to do.  Bottarga di mugine has a waxy, almost metallic texture and taste to it.  It’s soft, and should almost always be thought provoking.  It’s the type of ingredient that should make your palate work.  I detected  none of that in any single bite.  A worse failure was the watered down lobster.  If you’ve ever had fully frozen fish, you’ll be familiar with the watery aspect that I am referencing.  While this lobster wasn’t necessarily frozen through, it was a far cry from the freshly described crustacean I had hoped for.  Instead, it was a junk meat cut with little to inspire.

There were heinous failures in the service department as well, most notably the music.  A couple of string guitar dudes setup shop early on in our meal.  Though we couldn’t see them, we could hear them (as well as the music being piped through the dining hall).  It took nearly 15-minutes to shut down the speakers.

Amuse is a restaurant that should, but ultimately seems destine for should not.  Opened by gentleman well versed in the food scene, there is no excuse for anything like this passing in a city this size.

Maybe that cola coated steak is a culinary treat, maybe the piglet is a dish worth navigating a minefield to explore.  I’ll be back at some point, but for those of you not tasked with keeping up with the Jones’, I suggest you skip this stop and save your dollars until Amuse gives us something to smile about.  Like a traffic cop in ATL’s rush hour: “Move along, move along, move along.”