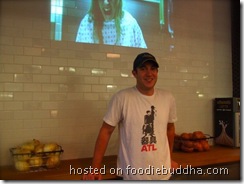 What better way to start off the new year than with a visit to Inside The Chef’s Kitchen.  Today’s chef du jour is Alex Brounstein of Grindhouse Killer Burgers.  Brounstein and his team, serving up round mounds of ground since September of last year, and have already garnered a good bit of praise.

With a come as you are attitude and an über cool location (inside the Sweet Auburn Curb Market), Grindhouse has already put itself closer to the top of the burger heap than to the bottom.  Meanwhile, Brounstein makes it a point to be a constant fixture in front of his wall projected movie screen.

Brounstein’s answers are in depth and full of good tidbits, so this should be an enjoyable read for y’all.  I’ll second his JBA suggestion for Kenny Shopsin.  If you make it up to New York City, a visit to Shopsin’s General Store should definitely be on your itinerary.  Anyone who makes Mac-and-Cheese pancakes is a hero in my book.  But we digress, as Brounstein is the star of the show.  So kick back, relax … and with that, welcome to ITCK!

1. What is your favorite ingredient? My initial thought was something that just pops with flavor, like truffles or sesame oil.  But when you cook with such a powerful ingredient like that, it tends to overwhelm the dish I think and everything tastes like just that ingredient.  Thinking more closely, I think my favorite ingredient is cheese.  Its great by itself, its even better when served with meat or accompaniments, and when you cook with it it can take a good dish to a new level, but without overpowering it too much.  Especially on burgers….

2. What is your least favorite ingredient?  I don’t hate too many ingredients, but I’m totally indifferent to iceberg lettuce.  It’s just useless filler – no taste, generally bad texture unless its really fresh and cold, and other types of produce work far better to give the same textural effect.  Of course, 95% of the items I serve have shredded iceberg…..

3. James Beard Award or Michelin Guide star?  Michelin Guide star seems like something my grandparents cared about.  Does anyone even read the Michelin Guide?  Maybe its big in Europe?  I dunno – seems contrived.  James Beard Award carries a lot more weight among my generation I think.  On a side note, I was talking to Christiane Lauterbach (Knife & Fork) the other week at Grindhouse, and we both agree that Kenny Shopsin deserves a James Beard Award.  Please look him up if you aren’t familiar with him – buy his cookbook ("Eat Me") and watch the documentary on him ("I Like Killing Flies")

4. What turns you off? Pretension.  I have no problem with chefs who take themselves seriously, but I think some of the chefs in town are delusional as to what they are.  Chefs shouldn’t try to be celebrities – chefs should be behind the scenes most of the time, making sure their restaurant puts out consistent, innovative and tasty dishes.

5. What is your favorite curse word?  Dickweed.  Is that even a curse word?  I don’t know when I started using it, but I think we all know a lot of dickweeds.  It’s fun to use also – nobody sees it coming, its definitely insulting to be called, and I can generally get away with saying it without getting punched in the face.

6. What one item must you have in your kitchen?  Lots of towels.  I make a huge mess.  I think half of my chomp & stomp chili entry ended up on the walls of my kitchen.  I was thinking of naming it Off The Wall Chili.

7. What one item would you ban from your kitchen?  Chef jackets with your name sewn on it.  Annoying.

8. What profession other than your own would you like to attempt? I don’t even know what my profession is anymore.   I started out in marketing, then with a record label, then practiced law, and then got into real estate.  The other day I was balling beef patties at Grindhouse while simultaneously giving legal advice to one of my construction guys.  I have no clue what’s next – I was thinking of maybe partnering with a local chef to open an in town culinary school.

9. What profession would you not like to do?  I don’t think I could ever work in a stodgy corporate environment again.  I also get seasick, so I’m going to rule out fisherman as a profession.

10. You are faced with the choice of selecting your last meal, what’s in it?  I think I would probably want something light so I don’t pass out into a food coma afterwards…I mean I’d probably have a lot to ponder after my meal if it was my last day on earth.  Japanese cuisine would probably be what I’d go for, since it’s very light and also feels very cleansing in a way.  So I guess I’d probably just ask Chef Morimoto to cook me whatever he felt like cooking that night.