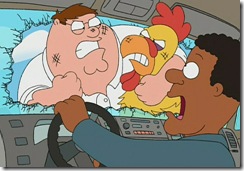 Some meals are so transcendent, so illuminating, and so invigorating that you are left speechless.  Some meals are just that good, incapable of being captured in text or image, and ethereally delicious.  This my friends, was not one of those meals.  No, the recent torture session of a meal that took place that fateful night left me feeling a bit like Tyson (post Buster).  No, actually … take that back, this meal made me feel like Ernie looks after an ass whooping at the hands of Peter (Ernie’s died several times over).

Café Antalya failed so epically on so many fronts that I fear nothing short of a tactical strike could save it.  Blow this blight of an establishment straight to heck and back.  Start over … get rid of the chef, get rid of the *cough* designer, and shoot whomever is in charge of sourcing.  Then, they might have a chance … maybe.  If I lived in the Dunwoody area, I’d be calling the fire department just to make sure they had enough water in the tanks.  I want my tax dollars back… who hands out the business licenses?

The drive to Café Antalya can be downright deadly at rush hour.  Still, if you can brave the traffic demons who jet and dart around GA-400 without so much as a blinker or a gaze, you’ll find Antalya just off Exit 6 at the west end of Northridge.  The strip center, which houses one of the Chin Chin outposts and a Moe’s, doesn’t do the restaurant favors.  Then again, neither did the person responsible for the layout. 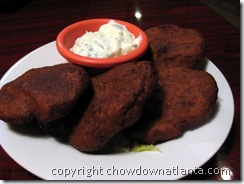 Some of the ATL food spots that I frequent could be referred to as a dive (hell, some of them are just down right dumps).  However, there is a difference between kitschy and disgusting.  This place wasn’t safe for my worst enemies’ worst enemy.  Walking in, I was immediately befuddled.  If not for the sign just outside or the fact that Spark Plug sat patiently awaiting my arrival, I’d have thought I was in a Hawaiian tiki bar.  Wood panels, red pleather, booths and hella funky music make this a dismal place to sit.  Still, I had heard great things about the food, so onward and upward we went.

Service in the sparsely populated restaurant was frustrating.  The gentleman who attempted to take care of us was so gosh darn nice … if anything else in the joint was half as good, I’d be writing a very different recap.  It was painstakingly obvious that he was not equipped to handle the responsibilities of a server.  I’m hoping for their sake that he was simply filling in … but I suspect that might be wishful thinking.  I think it was the owner.  Regardless, food was served with an awkward pacing, water glasses remained empty, and I could have sworn he just forgot we were there.  Those failures didn’t seem self-contained.  The table behind me suffered the same fate.

Okay, so the service sucked something major, and the decor was muy malo, and the location isn’t exactly “the it spot.”  Ah, but great [scratch that] … good [scratch that]… half-decent food can make up for some of that (I’m just trying to give them a chance).  Well, not here.  Not then, not now, not ever.  There are ways to tell if a restaurant is having an off night; and, there are ways to tell if things are systemically bad.  This, my brave little minions, was systematically disgusting. 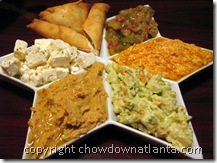 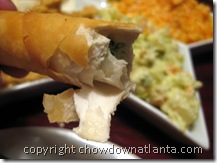 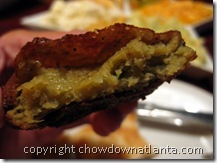 Being adventurous foodies who like to sample a diverse flavor profile at nearly every seating … we made a beeline for the meze platter.  The combo plate arrived with helpings of several Turkish delights, including Havuc Salatasi and Baba Ghanoush.  Though the manner in which they were served (self contained) was much appreciated, everything fell flat on its face. The havuc salatasi (shredded carrots) tasted like carrots dipped in sugar oil.  The baba ghanoush was congealed, the feta cheese was sour and bland at the same time (how is that even possible), and the two types of borek (those fried looking things in the picture) were naz to the T.  If the picture doesn’t translate, the explanation is simple: the food reheater dude took frozen sigara borek and musaka borek, dropped them in a fryer that wasn’t hot enough, and pulled them out way to early.  At $13 for the heap, I can’t say a single aspect was worthwhile, but at least the portions were ample.

Whatever remaining hope I had for Antalya died the moment the falafel were killed in the fryer.  They were mushy, flavorless, and had no depth or texture.  What’s worse – I had been told that they were destination worthy.  If they ever were the best in the city, I suspect they are a shell of their former selves.  It’s not like they were screwed up in the preparation; after all, these shameful chickpea patties were clearly imported.  The accompanying jajik sauce (a close cousin to tzatziki) slipped past my tongue with not much more than a whimper.  It was just that bland.  In fact, if not for the textural differences between the jajik and the falafel, I’d probably not have noticed the dipping sauce at all.  Advertised as the best, these were easily the worst I’ve ever had.

Just to make sure i wasn’t crazy, I passed on some of Al’s delicious meats a few days later in favor of his falafel.  Sure enough, the falafel at Agora went a long way to drowning out the memory of Antalya and locking it away in the annals of my spacious noggin forever.  But not quite … cuz Antalya was just that bad (have I said that enough yet… ???). 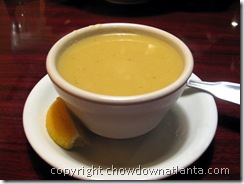 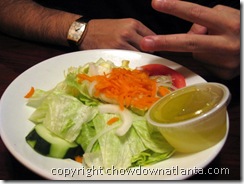 The torture continued with the lentil soup for the Ms. and the salad for yours truly.  Uh … both super sucked … let’s move on.  Okay, wait.  The lentil soup was green water (meaning it tasted as bad as it looked) and the salad came courtesy of the worst farmer in the history of farming.  I don’t think they sell that lettuce at the Food Lion.

As much as I wanted to lay prostrate on the floor and tap out of this one, I owed it to Bam Bam Bigelow to persevere.  Well, that, and my parents always taught me to finish what was on my plate … DAMN YOU MOTHER!!!!!!!!!!! 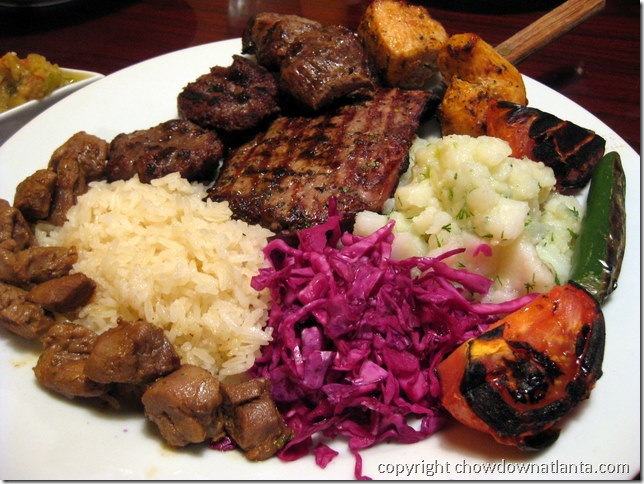 The mixed grill ($19) promised a cornucopia of delightful flavors.  It delivered a cornucopia of severely murdered meat.  Every single piece was coated with oil, oozing with grease, and dried beyond any cooking temperature I knew existed.  A combination of lamb shish, chicken shish, kofte, doner kebab and ribeye steak, the best thing about the plate was the rice.  There was something refreshingly nasty about dried out Uncle Ben’s coated with meat oil.  Maybe it was the satisfaction I got from knowing I didn’t have to eat that meat ever again … oh wait … yes I did. 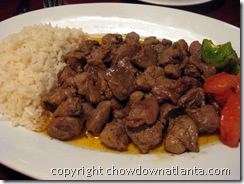 The choban kavurma (lamb – $16) was as stupefying as it was tasteless.  I’m not sure what choban means, any time I’ve had this dish, it’s been called kuzu kavurma (so if any Turkish experts are out there … please chime in).  Regardless, the little pellets of lamb were slightly less murdered than their brethren on the other plate.  But seriously – isn’t this getting a bit old.  Let’s just settle for the fact that it was horribly chewy, tough, and not on par with the food I suspect they serve the  … you get the idea.

I usually say that opinions are subject (‘cuz face it … they are).  But anyone who says Antalya is good is either dumb, blind, or suffering from anosmia.  Actually, probably all three.  Café Antalya is just so disgusting that I am loathing the idea that I might someday have to return.  I’d rather be sent to jail then back there … can I just have my $70 back?