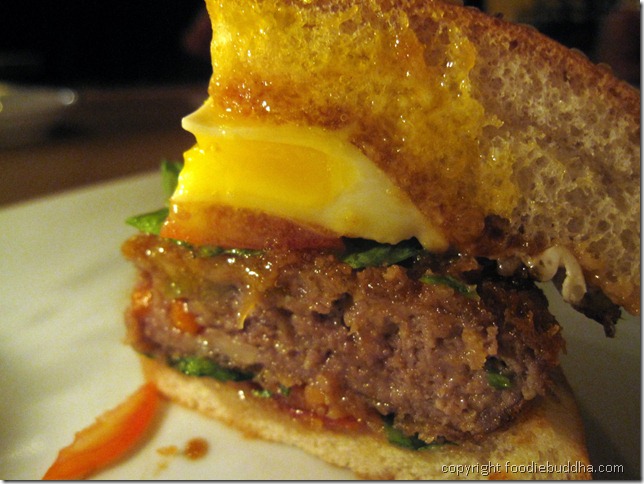 While playing with any convention is dangerous territory, it doesn’t mean it can’t be lighthearted and fun.  I believe that statement is a perfect representation of Taka Moriuchi, the facebooking blogger who also happens to produce some of the better sushi in the city.  Taka-san has a habit of mixing things up a bit, and his burger may just be his best attempt to date.

Japanese food is known for its artful simplicity and its tradition laden techniques.  Still, that doesn’t mean that the cuisine is the least bit static.  Many Japanese chefs, especially those of the sushi persuasion, are at the center of this movement.  Here at this precipice stands the Menchi Katsu burger from Taka Sushi Cafe, that ever popular neighborhood sushi joint located in the glitz of Buckhead.

True menchi katsu is fairly similar to a croquette.  It’s is essentially minced pork or beef that has been coated with panko and then fried.  Menchi actually derives from the English word “mince.”  As logic would follow, this type of treat derived from the Western foods that were introduced into Japan around the mid-1600s.  There’s more to the story, but that’s a good start for y’all.

Fast forward to present day Dirty and you have a burger obsession that is consuming the city.  While Taka isn’t really throwing his hat in the game, he is having some fun with the concept.  This ample sample of ground round is one part burger and one part menchi katsu (okay – it’s not actually ground round … but that has a much better cadence than “minched ground beef put into a patty” … right?).

When informed by the waiter that this was a special of the evening, you can bet your house that the percolated interests of the Buddha Boys eventually got the best of us.  An order was a requisite and what showed up was a pleasant surprise.  Though the bun was extremely pedestrian, it didn’t do anything to detract from the overall experience.  Inside, you found a thick mixture of ground beef that had been melded with several other flavors, some of which we could figure out, some of which are still a mystery. 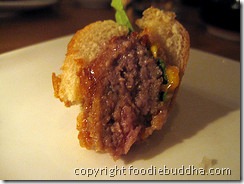 Slightly crunchy from the inclusion of some panko, the patty slide down its track of destiny with a great deal of pleasure.  Though prepared medium-well, there was no absence of juice.  The deep fry was an integral reason for that, so too was the sunny side up egg resting between meat and bread.  Hints of onion, carrot, and celery also gave these bites textural depth.  Perhaps most intriguing was the flavoring of the meat.  While predominantly sweet, it was still salty enough to maintain its roots in Americana.  I was, and still am befuddled by the precise ingredient responsible for the sweetness (some sort of soy marinade?), so if anyone out there happen(s) to reverse engineer the patty … please let me know.

A return home was a rude awakening in the need to pay attention to my “stream.”  Taka had actually posted details of the burger this past Thursday.  As I mentioned some months ago, Taka is one of the best Atlanta chef bloggers, so you should definitely spend some time over there.

At $7 bucks, this burger easily lays the smack down to some of the other overpriced burgers that dot our cityscape.  If you are looking for true American gluttony … this isn’t for you.  Otherwise, you should harass Taka-san (politely of course) and ask that he do a redux sometime in the near future as this was a weekend special.  Meanwhile, stay tuned for full details on the meal.