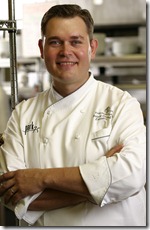 For the past 5-plus years, chef Robert Gerstenecker has helmed the kitchen at Park 75, the flagship restaurant of the Four Seasons in Midtown.  In addition to being an acclaimed fine dining spot, the restaurant has also garnered a good bit of attention for their tea service.

A Canuck by trade, the well traveled Gerstenecker has been with the Four Season chain since the early nineties.  He has spent time working everywhere from his native land to the Chinese port conglomerate known as Hong Kong.  It should be no surprise that Asian influences will sneak their way into the menu at Park 75.  If you do decide to visit Gerstenecker, there is a chef’s table in the kitchen.  It’s a friendly twist to a relatively upscale environment.

So while the seasons of our food lives continue to fluctuate, Gerstenecker keeps his nose to the ground and his food up to date.  Though I have yet to weigh in on P-75, it’s a place revered by many.  Time to get to know the man behind the stove.  And with that, welcome to ITCK!

1. What is your favorite ingredient? Love.  All kidding aside, It’s quite impossible for me to pick one, but one of the top favorites would have to be salt.

2. What is your least favorite ingredient? American Cheese…it’s not even real cheese…it’s a dairy product!

3. James Beard Award or Michelin Guide star? Neither. I’d prefer the local customer who comes to my restaurant frequently.  I don’t think people choose a restaurant based on ratings…they go where the food and service is memorable.

4. What turns you off? Lack of curiosity

5. What is your favorite curse word? I don’t swear…I know it sounds lame, but it’s the truth…

6. What one item must you have in your kitchen? a Sous Vide circulator

7. What one item would you ban from your kitchen? Any type of soup or stock base…and I do ban them…we even use fresh stocks for our employee cafeteria

8. What profession other than your own would you like to attempt? Farmer/cheese maker/astronomer

9. What profession would you not like to do? Lawyer

10. You are faced with the choice of selecting your last meal, what’s in it? This would have to be Kartoffelsuppe with Spaetzle, a relatively low country style soup that my mother made; it’s from the southern German region