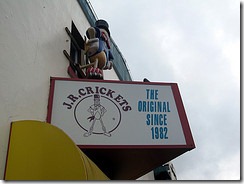 Saturdays and Sundays, at least the good ones, equal football and football equals wings (of the Buffalo persuasion).  Late in the calendar year, and on into the earliest months of the newest 365, men and women come together on those days of little sun for rowdy goodness.  At the intersection of beer guts and team pennants, you’ll find droves of people yelling at TVs and bantering with their nearest compatriots, all while donning their gayest apparel.

These engagements of caveman-like behavior would not be complete without a significant amount of sustenance.  More often than not, discussions of what to eat and what to order dwindle down to the sympathetic duo of pizza and wings.  For the past 28-years, J.R. Crickets has tried its best to remain at the forefront of those discussions.  In more ways than one, this wing establishment has matured into the wings version of Mellow Mushroom.  What started as a solitary fryer has blossomed into a dozen+ location chain with a reasonably strong following. On one such Sunday, after being summarily rejected by Jamal’s, we re-routed our caravan and made a bee-line for the original J.R.’s.  For those of you unaware, the original sits in Midtown just north of the intersection of Spring St. and North Ave.  You might think that sitting in the shadow of The Varsity would leave JR’s struggling for a customer base.  However, despite limited parking and an odd location, you’ll usually find at least a few people in their waiting for some deep fried fat.

The digs themselves are awash in “funny” signs and off-beat knickknacks.  Their mascot, which sort of looks like Mr. Peanut after a few too many lines of the white stuff, is plastered all over the place.  Meanwhile, the wordier plaques cover topics like restaurant etiquette and ordering requirements.  If you spend anytime reading through some of them, you’ll think you were at a satellite location for the Soup Nazi.  Don’t be misled, the attempts at approachable gruffness are actually pretty benign.  It’s an order at the counter sort of place, and I’ve never found service to be anything off-putting.  Then again, I don’t consider myself much of a dumbass, so maybe I’m not their target market. 😉

The menu is a full run wings, sandwiches, and other non-dietetic offerings.  Nuzzled in their are some a couple of salads, but I can’t imagine anyone would actually order one.  Actually, I’ve never had anything other than their wings, so proceed on your own in that department. The stars of the show can be ordered in multiples of ten and seem reasonably priced at first glance ($7.99/10).  However, they’re almost zygot-like in size, about the length of my ring finger.  While a single order (be it 10 or a dozen) will satisfy most people at most wing establishments, even my tiniest of friends can pack away 15 crickets without so much as a sip of water.  The price in the absence of steroid injected plumpness is a bit baffling, as its pretty clear they don’t source the farm to table stuff.

Flavor wise, these are a bit run of the mill.  There is promise since the sauce doesn’t incorporate too much sugar.  However, the vinegar base is somewhat pedestrian, finding a little too much on the concept of authenticity without actually delivering that (heavy amounts of butter).  In addition, you spend so much time working your wing like Lloyd Christmas works a thing of baby corn that you never really get the chance to enjoy the meat.

Where J.R. Crickets shines is in the crispiness of the flappers.  Even without my requisite double fried request, most people would happily bite into these wings and feel  right at home.

The sauces cover the basic scope of the necessary and only venture out with a Buffalo Teriyaki option.  It’s actually quite refreshing not to have 300 different sauce options as so few of places can master any more than a couple of them.  There are strong hints of Tabasco in the liquid courage, but I’ve never found anything there particularly earth shattering on the taste buds.  Then again, you’d basically have to hit me with a lighter and a can of aerosol for me to even blink.  Most people I know do go a level hotter than whatever their standard happens to be.

What really puts JR Crickets behind the 8-ball is the size of their wings, especially relative to the cost.  With their close proximity to the V and the extremely limited parking (via a little side street in the back), I just don’t think of them as a top wing destination.  Still, there isn’t anything “wrong” with Crickets, and if you fancy yourself a Wingian, like Eat It and I do, they’re a good mix it up option.

Alright folks, back to the grind!

POST SCRIPT:  As a note, many avid wing enthusiasts will point out that many “true” Buffalo wings are somewhat smaller in size than what most people are accustomed to.  While that is a discussion in and of itself, I will say that these are small, even by those standards.  If the prices were more inline, I’d be much more agreeable to the size of the wings.