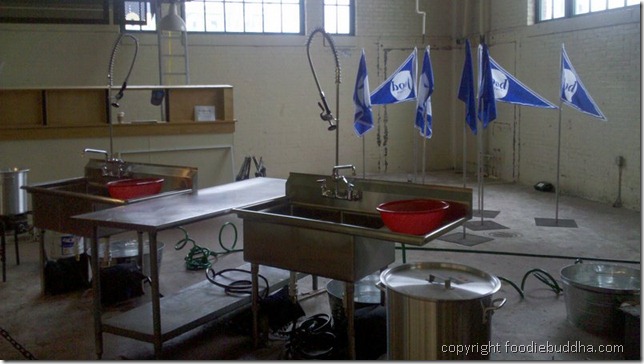 Yesterday, I mentioned that Food Network’s Chefs Vs City was philandering around Atlanta (in the foodie sense of the term).  Turns out, their trip to Holeman + Finch was just one in a series of stops.  As luck of the draw would have it, we caught CvC setting up shop in the Sweet Auburn Curb Market for a chitlins engagement.  In between tasty burger bites at Grindhouse, I managed to snap the above picture.

If chitlins sound unappealing (cuz lord knows they stank something awful), it shouldn’t be a surprise feature.  The premise of the show is that the two hosts (Aaron Sanchez and Chris Cosentino) hit up a city and challenge two local chefs to sample their cities most adventurous food.  However, it appears that this episode will feature challengers of a different breed.  Though I checked out a bit before filming began, I was told that Robert Irvine was one of the contestants.  Irvine is a celebrity chef who has a habit of turning up on the FN.

Ah but the info doesn’t end there.  Thanks to a heads up from @AtlantaDining, we’ve learned that CvC stopped in at The Buckhead Bread Company and the Atlanta Fish Market, two Buckhead Life restaurants.  Though I haven’t been able to get secondary confirmation of that, AtlantaDining is a reliable source … definitely worth the follow.

Last but not least, some investigative blogging turned up that the Atlanta episode will air sometime this summer, during season two of the program.