Late last December, I ran a little post on then upcoming meal at the James Beard House.  Atlanta chef/restaurateur Shaun Doty was scheduled to be the guest chef for one of the JBH’s special dinners.  Appropriately named Sean’s Southern Charm, the meal went down on February 3rd.  The good folk at James Beard were kind enough to post pictures of the event.  Here’s a sampling, but the full album can be found on the James Beard website.  If my original post isn’t enough, you can also check out the event page on JB: 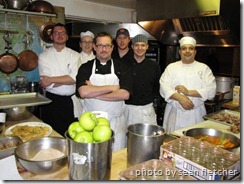