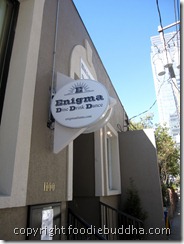 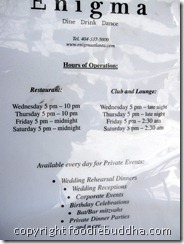 When Joia Restaurant & Lounge opened last July, it blew.  Less than six-months later, owner Marco Betti decided to throw in the towel … sort of.  With bad reviews permeating the desolate dinning space, Betti gave up on Joia and decided to reinvent the place … sort of.

Here’s what we know:  The new name seems like a veiled attempt to actually make this something it’s not.  The Joia website is still live (FAIL!) and the concept (part restaurant/part ultra-lounge) seems unchanged.  Not only is the phone number the same, but so is the menu (well, pretty darn close). That said, the Enigma website definitely emphasizes the heavy bass beats more than the last one.  As for the digs? I couldn’t see inside, so a lame exterior shot is all I can offer.