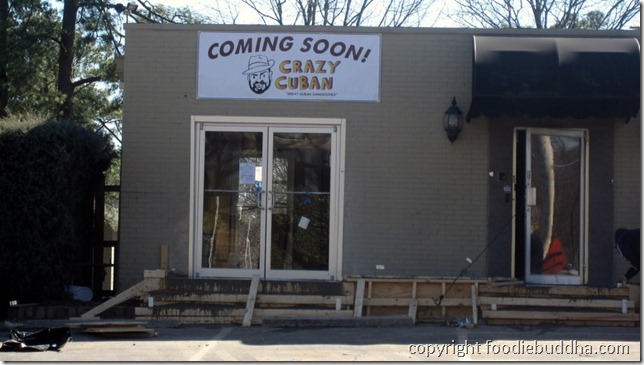 A new sandwich shop by the name of the Crazy Cuban is getting all nice and did before opening its door to customers.  Though Google maps may be off a smidge, it’s going in at 290 14th Street in Midtown Atlanta.  Steadfast and ardent fans of Cuban food may remember a place on Terrell Mill road that went by the same moniker.  I have no idea if these are the same owners.

This all comes towards the tail end of a very tumultuous time for Cuban restaurants in our city.  In reality, the Cuban restaurant scene has been a wasteland of turmoil for the past year +.  It really started back in the middle of ‘08 when the Kool Korners closed up shop and went to Birmingham.  Coincidentally, the old KK location is just a few blocks from where Carzy Cuban is going in.  Soon after that happened, Havana on BuHi was burned to the ground.  Though places like Papi’s and Las Palmeras kept on trucking, we were without our beloved flagships.  Recently, Havana returned, but in a different location and with a whole big drama in tail.  We’ll see what happens when this latest Cuban spot finally goes loco.