Undoubtedly, Bento Café is a culinarian’s delight.  At least, that’s what you’ll think if you visit any crowd-sourced review site (Yelp!, UrbanSpoon, CitySearch, etc…) in order to read-up on the ultra-modern Norcross eatery.  Add in the multitude of warm and fuzzy thoughts shared by most every blogger/critic to set foot inside, and this Taiwanese street food establishment seems dressed to impress.  Unfortunately, a recent trip to Bento left me and my dinning buddy elbowing each other out of the way as we attempted to exit the premises post haste.  Given the discrepancy between those that came before me and the bowel moving excuse of a meal we had, this easily scores as the most disappointing meal since I showed up on the blogosphere.

Things at Bento Café don’t start off bad.  Being that the restaurant takes up residence in Ben Thanh Plaza, you might expect a somewhat run of the mill decor.  In fact, Bento is dressed head to toe in ultra-hip industrial warehouse digs.  Just beyond the brightly accented ordering stall is a shotgun dinning area.  A handful of booths are joined by some communal tables and the steel grey walls and concrete block booth dividers give this a “heavy base” feel.  Maybe it’ll catch your eye … maybe it won’t.  All of this is wrapped nicely by the young woman who runs the place.  Her funkalicious personal style and friendly demeanor made our experience a pleasure.

Despite the misleading Japanese name, the food at Bento can loosely be identified as “Taiwanese street food.”  As with most Taiwanese cuisine, there are elements Chinese cuisine (specifically Cantonese in this case); however, there are also elements of Vietnamese grub and some other inspirations.  The short of the long is that it’s Taiwanese.  The number of available options are beyond extensive and will probably throw most people into a bit of a tizzy if they to play the exploring game.  In all honesty, the indecisive nature of the menu may or may not be a point of contention.  For those who like long lists, you’ll find yourself at home.  For those who adhere more to the The Paradox of Choice

ideology, you may just want to close your eyes and point. 🙂

It’s nice to see items like Ba-wan (a gelatinous dough stuffed with meat and floating in a sweat and savory sauce) and dua deng (rice stuffed sausage casings).  Had my stomach space permitted, we almost certainly would have ordered them.  Instead, we settled on an order of the pig ear, the Bento nuggets, the fried chicken, and braised pork. This is a traditional dish and served cold.  The pig ear comes in a sweet brown sauce with a mix of lettuce and scallions.  Initial bites were an unfortunate pre-cursor to what was on tap.  The pig ears themselves had the chewy/crunchy texture one would expect, but the flavor of the dish was non-existent.  Dabbles of the sauce showed a broken down execution where the muted sweetness only hinted at the potential full on flavor.  Meanwhile, the veggies did little to drive me – they just weren’t that fresh. 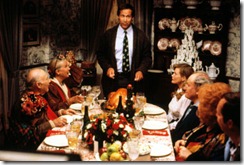 The bento nuggets and the fried chicken can really be summed up together.  They had a nearly identical flavor (high salt, thick batter) and were both cooked well-beyond an ideal temperature.  The nuggets were particularly offensive.  I felt like I was eating rock pellets.  The batter was so thick, the salt was so excessive, and the chicken so dry that bites barely made it past my teeth.  It was a struggle. To say the least.  The fried chicken itself was like something out of Christmas Vacation.  Ever seen that movie?  When Clark goes to cut the Christmas turkey, the thing basically implodes upon itself into a boney, airy, mess.  Yeah, that’s just about what you have here.  Though not as overdone as the nuggets, the fried chicken had essentially the same flavor.  These both need to be cooked for less time and have their seasonings improved upon. So after suffering through those three dishes, I reluctantly turned my attention to the pork belly.  It was a sad sack if I ever saw one.  The poor thing had been killed several times over and the sauce was so broken down that you could see the oil deposits just floating there.  As my table buddy put all of her might behind the cutting process, it was painstakingly obvious that this thing had been overcooked more than the chicken.  Still, she insisted that I torture myself, and seeing as she’s the boss, I obliged.  Damn you vile woman!!!!  This was singularly the worst bite of food I can ever remember having … easily worse than anything I sampled at Café Antalya.  It came back out into my napkin it was so bad.  Forget the bland flavor, forget the tough texture, and forget the broken down sauce.  No, the true culprit here was the stand time.  This thing was old … lord knows how long the food had sat out.  Who knows when it had been prepared even.   No place should ever serve something like this to a customer … ever. This point really strikes at our experience at Bento Café.  There are dishes that I don’t care for … but I know are good.  There are styles of food that are distinctly different on the palate and dishes that are well executed that don’t make nice with my tastes.  This however, was a case of poorly prepared food that should have never been served.  Had anyone taken even a second to look at the food, you would see that something was amiss.

So while I’d like to stay and chat, there’s no reason to beat a dead pork belly.  The kind service and fun layout was all for naught.  As much as I hate to say it, we got bamboozled with some of the worst food to hit this mouth since ‘79.  I guess now is as good a time as ever to let you know that I was born in ‘79 … so that’s saying something.