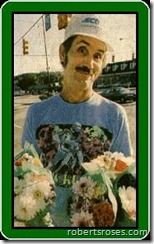 Some very sad and totally off-topic news to report.  Robert Hiestand of Robert’s Roses has died.  Nearly everyone who drove by the corner of West Paces Ferry and Northside Drive during the past 20 or so years likely spotted Robert standing on the little island dishing out a smile and some love.  He died this past Tuesday of a reported stroke; he was 55.

The West Paces Ferry flower guy was a fixture of my childhood, and I, like many others, bought many a flower from him over the years.  The Robert’s Roses website has promised to add more information, so check there to get the latest.

As a street corner florist, he was tops in this town.  Regardless of the weather, Hiestand mad it a point to get to that corner!  In honor of Robert, I am not going to post my review scheduled for today.  Instead, check back tomorrow when we get back on the saddle.

UPDATE: There is currently a facebook group entitled 10,000 to build a monument at W Paces Ferry honoring Robert the Flower Man.  It’s already over 600 fans.  Meanwhile, R.I.P. Rose man has roughly 2,000 fans.  It’s nice to see the community come together on this.  Meanwhile, there are already 2700 fans of Robert’s other facebook page.