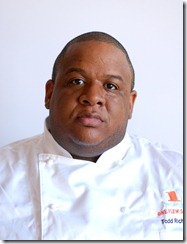 Todd Richards is fairly well known around these parts. Richards’ restaurant group (Lush Life Group) is the driving force behind Rolling Bones BBQ and One Flew South, that high-end restaurant located in Hartsfield-Jackson’s E-Concourse.  However, his notoriety isn’t limited to the Capital of The South.

Mixed in with his stay in Atlanta, Richards spent time in Chicago, in Nashville, and in Palm Beach as the chef de cuisine at the Ritz-Carlton.  In fact, all that work even earned him a spot on an episode of Iron Chef America.  Nowadays, you’ll find him sticking close to home as he works on a bounty of different projects.  One of the most accessible is his blogs, which is one of the better chef scribed blogs to come out of Atlanta.

But of course, Richards still makes time for we poor plebeians of the pen with a stopover for Inside The Chef’s Kitchen.  So on this Friday of beautiful weather and happenings, take a peek at what Chef Richards has to say.  If you take a liking to Richards’ humor, be sure to check him out on twitter @Rollingbonesbbq. And with that, welcome to ITCK!

1. What is your favorite ingredient? Thyme.  It balances flavors.

2. What is your least favorite ingredient? The wrong item that was shipped by mistake (wink wink) or a piece of hacked up fish.

3. James Beard Award or Michelin Guide star? An animated no pants wearing character or a guy who hung out with Julia Child.  Sometimes the questions just answer themselves.

4. What turns you off? Customers who because they think they cook at home or go to Whole Foods and buy organic lemons think they can tell me how to cook.  Stay your ass at home and cook then.   People who walk around with their pants hanging off their butt and wear a belt.  Fake boobs; it’s like trying to swat two flies.  Don’t know which one to look at first. Over cooked chicken.  Imitation vanilla or lemon flavor.   Liquid Smoke.  Bartenders who can’t make a classic cocktail.

5. What is your favorite curse word? All of them.  I use them appropriately.  Assholes for assholes. Fuck for stupid people, fuck for fuckin’ and shit when I fuck up or do something stupid like really think that my idea fine dining restaurants will make it in Atlanta.

6. What one item must you have in your kitchen? Time.  You can’t rush and do it right.

7. What one item would you ban from your kitchen? Cell phones unless you’re taking pictures to post on a site.

8. What profession other than your own would you like to attempt? Music Conductor.  To get that many people together for one harmonious sound is awesome.

9. What profession would you not like to do? Chef.  I don’t even know what that term means anymore.  Don’t you have to be in a kitchen to do so… The term is so bullshit right now.

10. You are faced with the choice of selecting your last meal, what’s in it?  Who cares.  It’s the last meal.  All I’m going to do is eat it and look around and wonder WTF have I done with my life.  How can you enjoy that meal.  Now the one before that would take an entire day.  Steel cut oatmeal & vine ripen raisins for breakfast, truffle scrambled eggs & foie gras for lunch, sushi for early-afternoon snack, Chef’s tasting menu at Providence restaurant LA for dinner, late night cocktails at Violet Hour Chicago and Cold Fried Chicken for the munchies when I finally arrive at home.