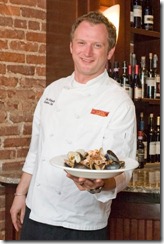 Craig Richards of La Tavola in Virginia Highlands has been serving up straight up Italian food for the past several years at the neighborhood trattoria.  As many with many residents of Atlanta, Richards didn’t start off here.  He relocated to Atlanta from Kansas by way of Kansas City.

While in Kansas City, Richards had the opportunity to work under Lidia Bastianich.  Bastianich, one of the earliest celebrity chefs, is a fairly well known restaurateur and cookbook author.  You may remember her from her PBS TV show.

But alas, Richards left Bastianich’s care after spending some time in her eponymous Pittsburgh restaurant and moved to Atlanta.  Now as the executive chef of the Fifth Group’s La Tavola, Richards spends most of his time hunkered down in the kitchen.  He’s not all work though, you can find him cavorting around facebook or posting to his blog, which he started in August of last year.

Despite his handful of obligations (kids, wife … swimming), Richards did manage to squeeze us in for a little bit.  So sit back and enjoy … and welcome to ITCK!

1. What is your favorite ingredient? Wild boar

2. What is your least favorite ingredient? Chicken breasts

4. What turns you off? Whiners, lazy people

5. What is your favorite curse word? Fuck

6. What one item must you have in your kitchen? Woodson spoon

7. What one item would you ban from your kitchen? Dull knives

8. What profession other than your own would you like to attempt? writer

10. You are faced with the choice of selecting your last meal, what’s in it?