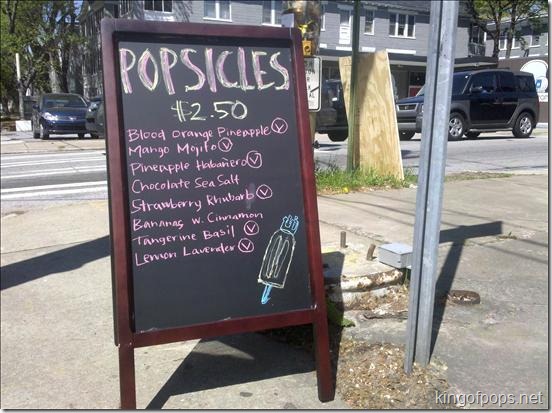 Another day, another day closer to true street food here in Atlanta.  First up, The King of Pops.  Apparently, his cart arrived last Friday, though I totally missed the news!  Today, he’s back at his first location (Buddy’s Gas Station at the corner of North Ave & North Highland) from 3pm until 7:30 (or so…).  Hit him up … and quickly … cuz these $2.50 popsicles sound too good to last.  If you plan on visiting his mobile popsicle stand, you’d best give Steven a follow on twitter, which is where I stole (borrowed with the hope that i don’t piss off the King) that picture.  Anywhere, go try some!

UPDATE: I was originally under the impression that The King of Pops would be able to move around to a couple of locations; however, it appears he’s only licensed for the spot he’s currently in.  For now, his plan is to be open every afternoon at Buddy’s, but we’ll just have to see how that goes.  If you’re in the area, I highly suggest you go … I just had one and it’s FREAKING GOOOD!!!