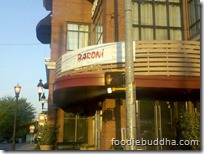 The owners of Baraonda are expanding their mini-empire with the opening of a new Italian restaurant on the north side of Midtown.  The still cooking Barona is set to open in Brookwood Place (1745 Peachtree St. Atlanta, GA 30309) in the space vacated by Wolfgang Puck’s.

The restaurant group made some waves last year when they shuttered Bazzaar Lounge in favor of Publik Social House.  Then, earlier this month, they shut down Enoteca Carbonari in order to expand Baraonda (the new adjunct is named Baraonda’s Wine Room).

There isn’t a whole lot known of Barona at this time, however, a few things are out there.  There’s no fixed opening date on the map, but late April to Mid-may have been tossed around.  The vibe will definitely be that of a neighborhood trattoria, with pizzas, pastas, and a handful of traditional Italian options available.