Earlier today, I received an emphatic email attacking the post about my first pie at Rusto’s Pizza, a new pizzeria in the Cheshire Bridge area.  I have taken the time to share this email with people and let you pass your own judgments.  It comes from a concerned citizen by the name of Chris Jones, who has an uncanny familiarity with the people behind this pizza shop.  Although he is unaware of the fact that pizza with pesto is still classified as white pizza (albeit with a green hue), and that a side salad isn’t really a salad option, he was kind enough to explain to me why the burnt to all heck pie that I had was not indicative of their wonderful pizza.  I have taken it upon myself to add some line breaks for readability.  Otherwise, it’s a direct copy of the email received. 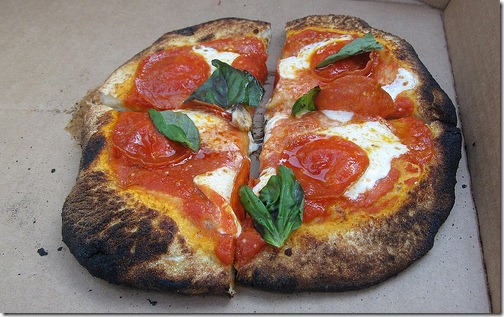 Hey Buddha, with all due respect, if you’re going to bash the be-Jesus out of these guys on your blog — at least have the decency to get your facts straight. Two things: 1) "The flat panel TV is easily the best thing inside." >> I counted three (3) flat panel TVs (plural) when I was inside. 2) Re: Menu: "The left side offers up four pre-designed pies (two red and two white) while the adjacent occupants are the hand full of ice creams ($3.75), the salad options ($6.50), and some supplementary information (like the prices – $14 large pizzas / $7 small pizzas)." >> Of the four pre-designed pies, I counted 2 red, 1 white, and 1 pesto.

Unless pesto counts as a “white” pizza, this statement is simply false. Also, I believe the side salads are $3, although you did get the price of the caprese salad right (good job). Russell is an accomplished chef in his own right, and he’s very receptive to any kind of feedback. However, my guess is that you got this pie to go, smiled politely, and left the premises to go write your negative (and even slanderous, considering that it contains blatant falsehoods) review behind a veil of anonymity. I know that I can’t make you change your review or change your mind, but just hear me out: These guys went out on a major limb and took real risks in opening Rusto’s. What they’re trying to do takes guts. And after reading your review and profile, I couldn’t help but wonder why someone with so many years’ experience “dabbling in the restaurant community” can’t at least show a little respect for two guys who would take such a leap of faith.

The fact of the matter is that it hasn’t even been two weeks since Rusto’s got their oven, and Russell’s obviously still working out the kinks. Most of the people that I’ve talked to say the same things. They say that the sauce is excellent, the cheeses are phenomenal, and the dough needs work. On a side note: The ice cream is exceptional. Anyone that doesn’t like the ice cream is either lying or out of his mind. I believe that if you’d tried it, you would have enjoyed it immensely. Now, Russell knows what he’s doing, and he’s a problem solver.

I expect that very soon, he’ll have the pizza-making down to a science, and these early days of angry foodies giving him horrible reviews will be distant memories. When that does happen, though, I do hope that you will go back and give Rusto’s pizza another try. Because when you do, I believe that you will see that you trashed them in haste (and in poor taste). My guess is that if he takes the heat of the oven down a notch, and he slightly lengthens the cook time, then the dough will be in much better shape. And next time, please don’t be afraid to tell the chef exactly what you’re thinking to his face — most people would appreciate that being direct is a much better way of giving much-needed feedback in the early stages of a restaurant’s opening. The world needs more people like Gordon Ramsey, so speak up! Thanks for your time, Chris “concerned citizen” Jones