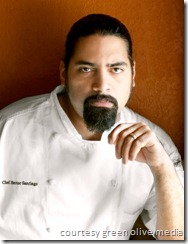 On the last season of Bravo TV’s Top Chef, Atlanta made some real headway.  We were fortunate enough to have three local chefs make it on to the hit reality TV show.  Since then, the city hasn’t stopped buzzing.  Many moons ago, Kevin Gillespie, pork tats and all, was kind enough to make an appearance on our weekly series, Inside The Chef’s Kitchen.  Now, thanks to Hector Santiago of Pura Vida, we welcome the second of those three chefs.

Stupidly exiled from Top Chef after a French themed challenge (in which the one French chef on the show represented suck-tastic), Hector is back in our city and doing his thing.  Puerto Rican through and through, you can find him slinging pans most any night at his tapas restaurant in Virginia Highlands.  Appropriately located just off Ponce De Leon Ave (Ponce de León himself played an important role in Puerto Rico’s history … he brought them rum amongst other things), Pura Vida is one of the long standing Latin restaurants in the city.

What better way to end this beautiful week with a mojito and some light reading.  And with that, welcome to ITCK!

1.  What is your favorite ingredient? Salt.  It is the most misused ingredient, and to me the most important.

2.  What is your least favorite ingredient? Keeping in mind that I love fish sauce and bacalao, I can’t stand overly fishy stuff.

3.  James Beard award or Michelin Guide star? I’d say James Beard, since it looks more to the food, cuisine and chef, and less at the human comforts.

4.  What turns you off? Bull, insincerity.

5.  What is your favorite curse word? Puñeta!  It is Spanish for the "F word".

6.  What one item must you have in your kitchen? strainers

7.  what one item would you ban from your kitchen? Hardly any.  I’m very open to innovation and to rigging stuff to make it happen.

8.  What profession other than your own would you like to attempt? Craftsman of some sort.  I’ve made some of the tables at Pura Vida, as some lighting fixtures for Pura Vida and for my home.

9.  What profession would you not like to do? Almost anything behind a desk.

10.  You are faced with the choice of selecting your last meal.  What’s in it? Pork, Rice and possibly beans… typical Boricua (another word for Puerto Rican).