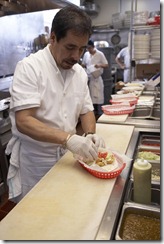 While executive chef Eddie Hernandez may not be a household name, his restaurant chain sure is.  Ask someone to get tacos in this town, and there is a good chance that they’ll suggest one of the three Taqueria Del Sol locations as their destination du jour.  Started a few years back with a single location over on the Westside, the restaurant now stretches across Atlanta’s waistline like Orion’s Belt.  With locations on Cheshire Bridge and in Decatur, this taco bar empire has even showed up in Athens.

At the epicenter of this tortilla fest is founding chef Eddie Hernandez.  Along with Mike Klank, the duo opened the Westside location way back in 2000 [Holy Crap! That’s 10 years ago].  You may have caught wind of that; this past month TDS celebrated their anniversary with a handful of events.  They also made an appearance at the Souper Jenny Food Truck Extravaganza.  If anyone is capable of handling all the running around, it’s Hernandez.  The politically inclined gent once served as the mayor of Rosebud, TX.  How’s that for a career change?

In any event, Hernandez has turned in his pen and paper and taken up a knife and tortilla maker.  Thankfully, he found some time to join us for a little Q&A on this week’s edition of Inside The Chef’s Kitchen.  Taqueria Del Sol is as popular as ever, and Hernandez is the reason.  So get your Mint Julep (it’s Derby Day after all), kick back … and welcome to ITCK!

1. What is your favorite ingredient? Peppers

2. What is your least favorite ingredient? Nothing, all are good to me!

4. What turns you off? Too many things on one item—make it simple

5. What is your favorite curse word? All of them when the time is right

6. What one item must you have in your kitchen? Peppers

7. What one item would you ban from your kitchen? Hmm, I don’t know.

8. What profession other than your own would you like to attempt? Pilot

9. What profession would you not like to do? Politics

10. You are faced with the choice of selecting your last meal, what’s in it? My mom’s cauliflower with egg wash