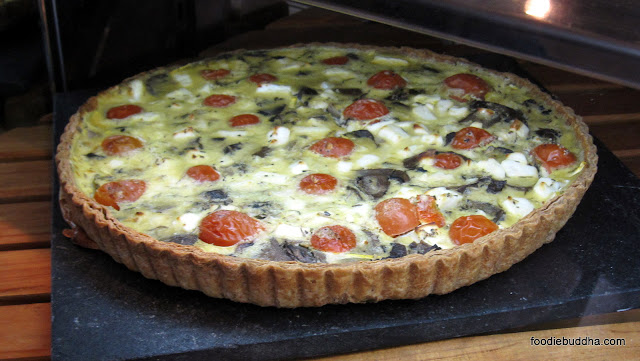 Somewhat beneath the surface, just under the wave of pizzerias and the influx of burger joints, Atlanta’s bakery scene is seeing an infusion of new life.  With establishments like Bakeshop in Midtown leading the way, this new brand of baking is in stark contrast to what you and I may remember as the quintessential bakery.  While some of my fondest memories were youthful excursions to Rhodes Family Bakery (website) on Cheshire Bridge, the glorified home kitchens and come as you are personas are being pushed around by big budgets and treated woods.

Don’t believe me? Look what happened to Holeman + Finch Bakery.  While that no frills storefront suffered from location woes, they too were a bake first, look good second kind of a place.  Consequently, their front windows have been boarded up, leaving those of us who crave delicious goodies scampering to places like Savor Specialty Foods.

Bakeries are no longer places to pick up your favorite treats, talk to your baker about the fam, and dream of all that hippy dippy stuff.  They are now as much sandwich shop and coffee stop as they are dessert purveyor.  It is smack dab in this world that we find Bakeshop, one of the newest explorations from the gang at Concentrics. 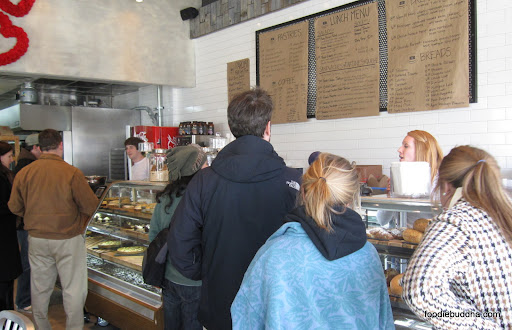 Stationed in the old Goldstar Bakery location (that’s the corner of Peachtree and 8th), the open air room contains brown paper menus against subway tile, several group therapy tables, with treated this and polished that.  It’s industrial casual focused on cool before cozy.  It’s not bad, but it’s nothing new.

There isn’t a thing really garish or shameful in the design; however, there is at least repeated problem.  On any given day, you’ll see stacks of flour bags obscuring your view outside and a slew of tacky cardboard boxes shoved into spaces they shouldn’t be.  Sloppy!  But we refocus.

As with any bakery, it’s all about the eye candy; and Bakeshop happily obliges.  A smattering of breakfast items (danish, croissants, etc) lead your eye gracefully down the counter to a land of colorful tarts and fun potted sweets.  Keep scanning and you’ll see a bread rack taunting you with a selection of breads and bottles of olive oils. 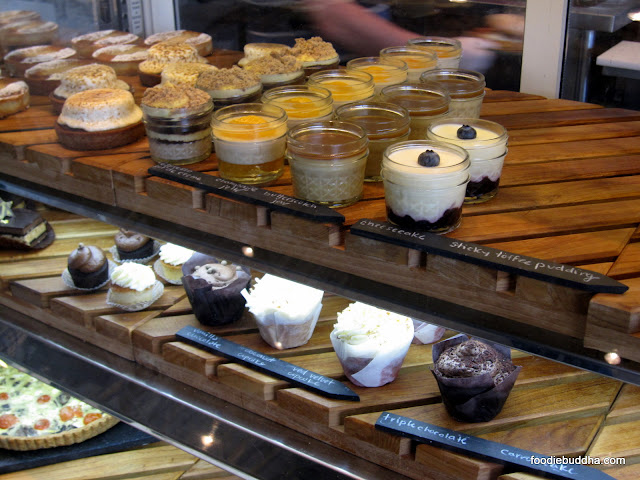 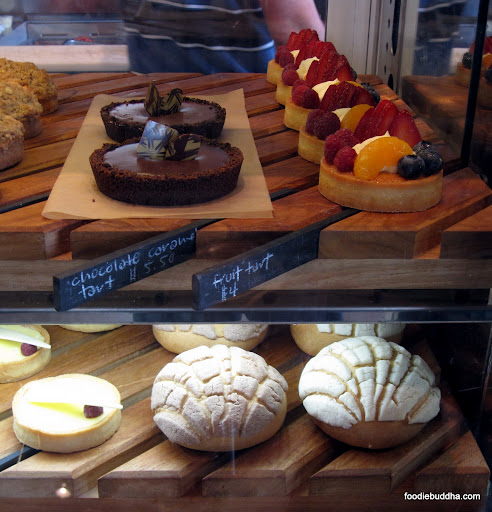 Eventually, you’ll realize that stuffing yourself full of sugar probably isn’t what your doctor would call “A good idea.”  Your eyes will drift up to the large and handwritten menus just above the bustling pastry case.  The three headed dragon starts with pastries and coffees, moves toward sandwiches and soups in the middle, then wraps up with breakfast items on top of bread selections.  Though it’s not succinctly laid out, it’s not large enough to really be an issue. 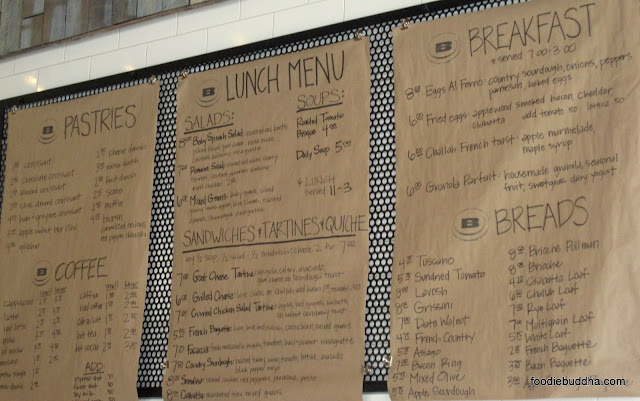 Buying expensive baked goods won’t hurt you like 24 oz of Beluga, but it isn’t a non-factor.  Bakeshop is very expensive. Breakfast food is $6 before you add in anything, and the sandwiches are skimpy for the $7 price tag you usually see.  It isn’t actually the prices, but that the food didn’t blow me away.  Had my $6 French baguette been up to snuff, I’d have actually appreciated the more reserved sampling.  But we’ll get there in a second. 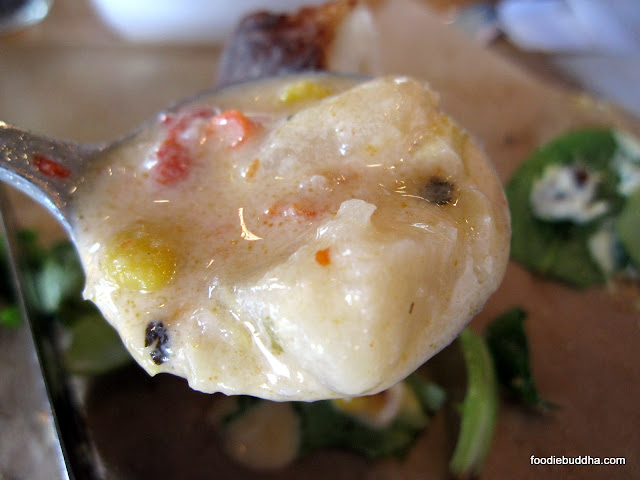 First up was the soup.  Special for the day, this cast iron catastrophe was a broken serving of shrimp/corn chowder.  First problem: temperature.  Second problem: replacement cup’s temperature.  Yes, they were both lukewarm (and that’s being generous).  Sitting in a massive urn for way too long, the chowder had clearly broken down many hours prior to our arriving (sad, especially since we arrived around 1pm).  As you might expect, the shrimp was overcooked and the soup had no context or statement.  It was lifeless and non-descript.  Split between the two of us, I don’t think we made it past bite four. 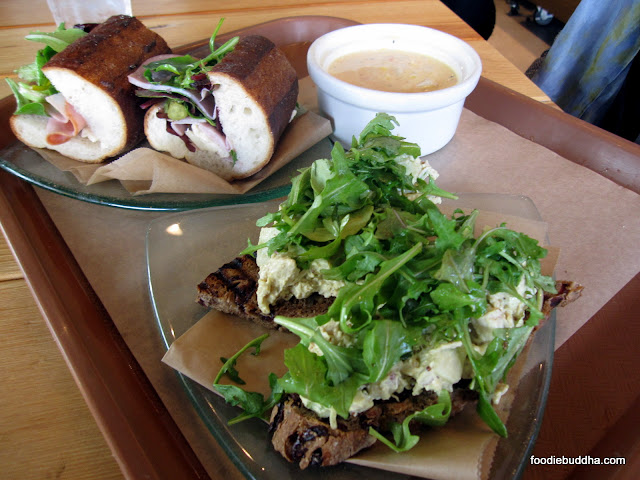 So the soup sucked something significant, but there were two sandwiches to sample as well.  My yet to be nicknamed guest went with the “Curried chicken salad tartine” for $7, and I went with the French baguette for $6. 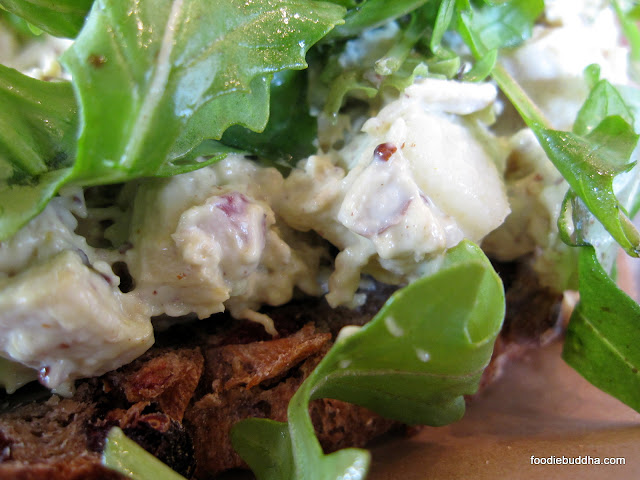 The chicken salad wasn’t so much as an outright failure as it was a disappointment for being a misfire.  Maybe they gave us something else … who knows.  Listed with apples, grapes, and walnuts, it came on walnut cranberry bunt (slightly overdone) toast.  Served open face, it was competent, but didn’t earn any medals of honor with either of us.  There was no hint of curry in our sampling, and the red grapes and apples were lost at sea.  The stack of arugula was fresh, but like chicken salad, fell far short of the idealized effort we thought was going into the food.  The bread itself was swallowed by what was on top, and it didn’t help that it was cooked for too long.  All in, it’s the type of chicken sandwich you put in your mouth and say to yourself: “Yup, that’s chicken salad.”

While the chicken salad, in whatever iteration, was passable, my French Baguette was a puny pile of Garth Algar … maybe it looks big … but I assure it was not. 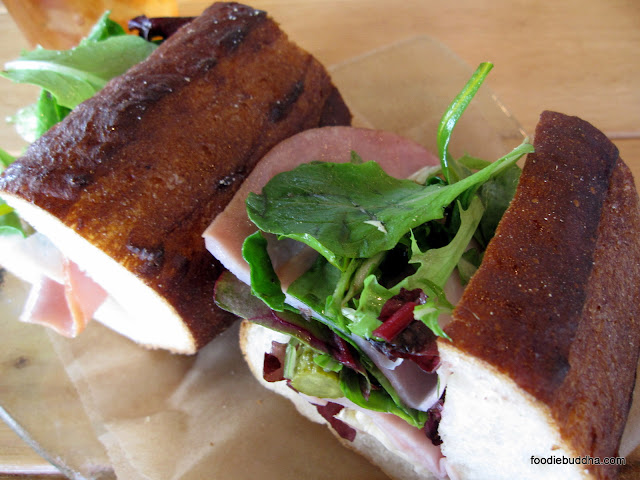 For just shy of $6, I got run of the mill ham, with brie cheese, some red radish, “cornichorn” (sic – see we all make spelling mistakes), and mixed greens.  FBI’s most wanted suspect: the baguette err toast uh burnt beyond recognition toast.  Bread at bakeries is like service at any restaurant: it should be right (and has to be right) every single time.  Forget the cooking temperature, it was lifeless in form and flat on the tongue.  The rest of the ingredients just meekly followed … With no porktastic richness in the ham, and no palatable sign of the red radish or gherkin, the sandwich was just a total let down.  Again, we have to learn to separate the term “not good” from “bad.”  Keeping that handy, this was not a good sandwich.  🙁

So we finished up, scratched our heads as to the $22 price tag for two sandwiches and a little soup (no sides … one fountain drink), wondered why the dining area doubled as a storage center, and moved on with our day.

As with many establishments from the handful Atlanta restaurant groups, I’m still a little baffled as to why a wow bite of food (or even an mmm bite) is an exception to the rule at Bakeshop.  That of course assumes the mmmm is actually there.