Since my introduction to Yakitori Jinbei in late 2009 (thanks Spark Plug), the restaurant has worked itself into my regular rotation.  I’ve introduced several people to the joint, told countless others, and return whenever I get a hankering for some ramen. (occasional acts of indiscretion at Haru Ichiban notwithstanding).

Having successfully convinced many a foodie that I am not actually cuckoo for cocoa puffs, the newly minted Ramen Brigade set out late last week for a little Hi, Hello, and some much needed sustenance.  Having grabbed Spark Plug and @NoKungFu in route, we met up with Dea (website) and Weigy (website) for some good ole fashion yakitori.  Needless to say, I had no business at the table with people who might as well bleed Asiatic cuisine.  Still, I managed to sneak a seat, and the Ramen Brigade was up and running.

Bout now is the time when I get all descriptive about the digs and blah … but we’ve been there and done that.  So let’s just hit the food … shall we?

As it was my first dinner time visit, this was my first opportunity to grub on their eponymous dish … explained to those in the dark when you walk in: 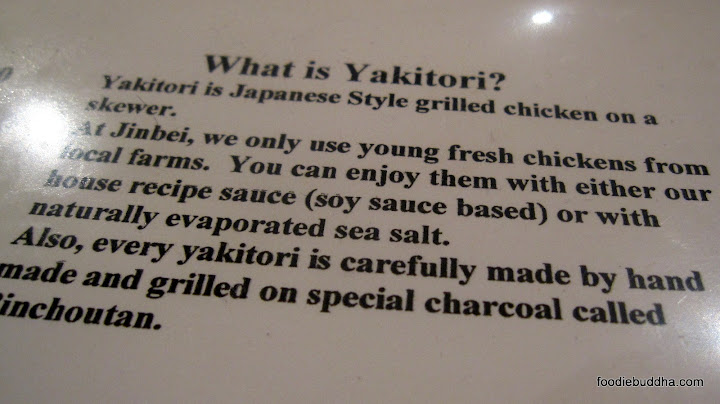 Settling in, we took down a sampling of the barbecued chicken: 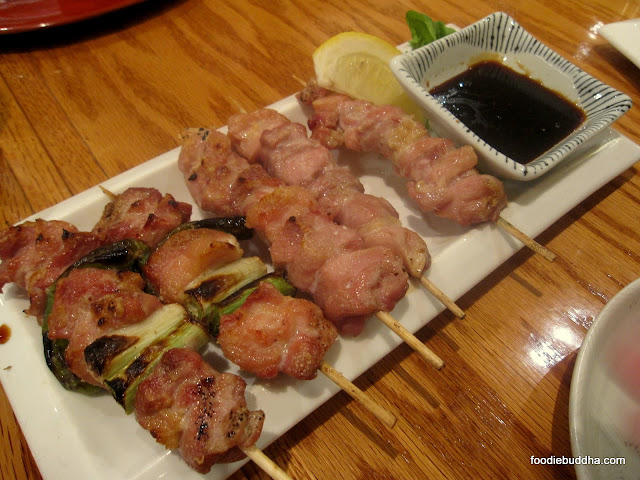 Fresh, and lightly charcoaled, this stuff was de-skewered with precision, dipped in the tare sauce, and downed in just a few bites.  Fun to eat, I felt like it was a little undercooked.  Consequently, the bites were juicy and moist, but just a touch rubbery to me.

After offering up that jewel of an opinion and getting stares that might as well have been from the Mexican Staring Frog of Southern Sri Lanka (right), I meekly returned to my plate and waited on the rest of the precession. 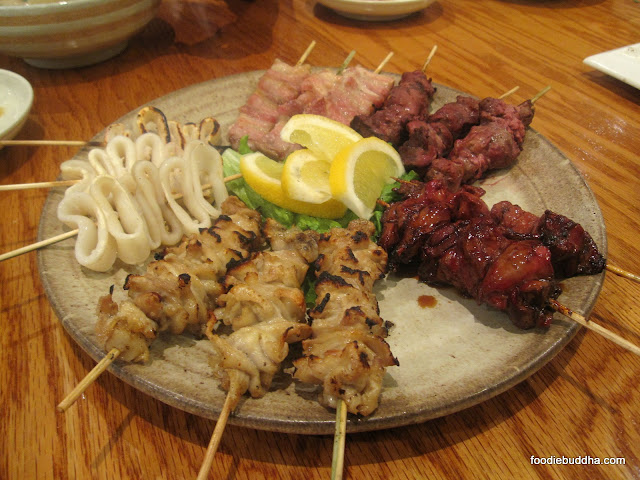 I dissembled this sucker of chicken offal (or at least my portion of it) faster than my nine-year old self first ripped apart his Leader-1 and Cy-Kill toys (those other robots in disguise).  Thankfully – mom replaced them! 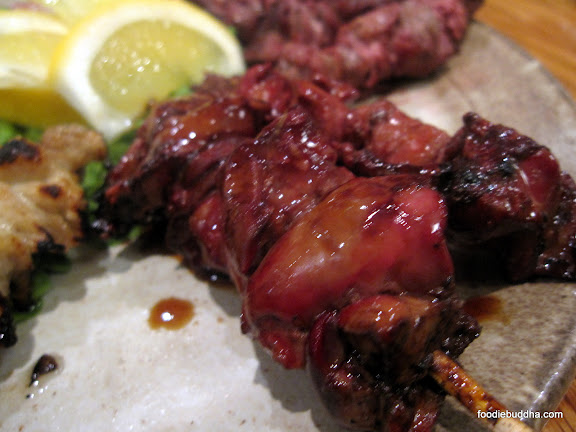 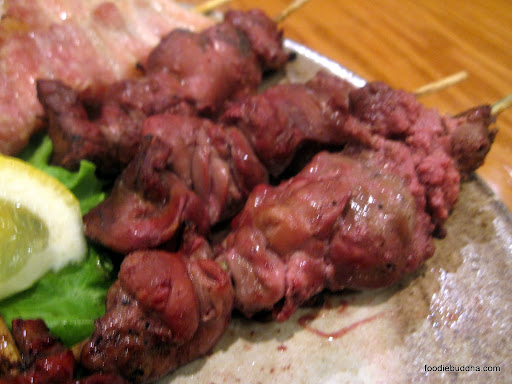 Sauced on the left, salted on the right … both were a little dried out.  Cooking chicken liver is a cautionary tale, one that wasn’t read carefully in this instance.  Overdone chicken liver has the propensity to dry out the tongue … when combined with salt … it’s like the Sahara.  The sauced version had the tare to help, but it too was dried out.  However, I’ve never met a liver I didn’t like … and YJ’s did little to invalidate that.  If it’s cooked more appropriately in the future … I’ll be a big fan. 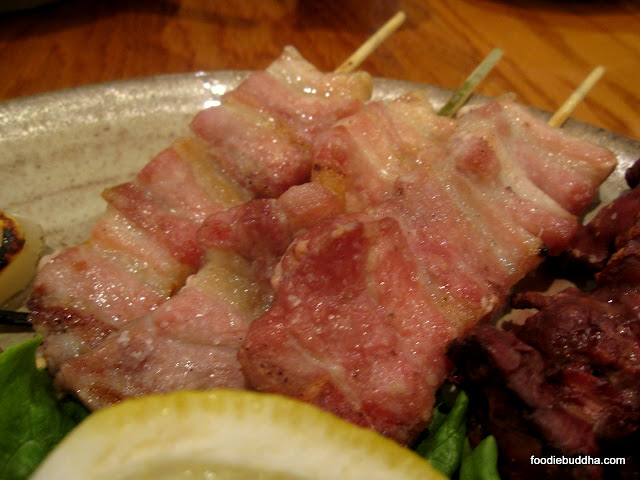 Mouth … meet bacon … or in this case, barakushi.  I’m actually unfamiliar with the term barakushi … but I don’t speak Japanese.  I’ve always heard the above referred to as butabara, and at least one other ATL foodie is familiar with that term.  [This is where one of my readers chimes in … cough … comments]. Whatever the damn name, the above Japanese bacon was undercooked, leaving it a little more rubbery than it could have been.  Still, mixing the high fat pork with the grill is not a bad combination … 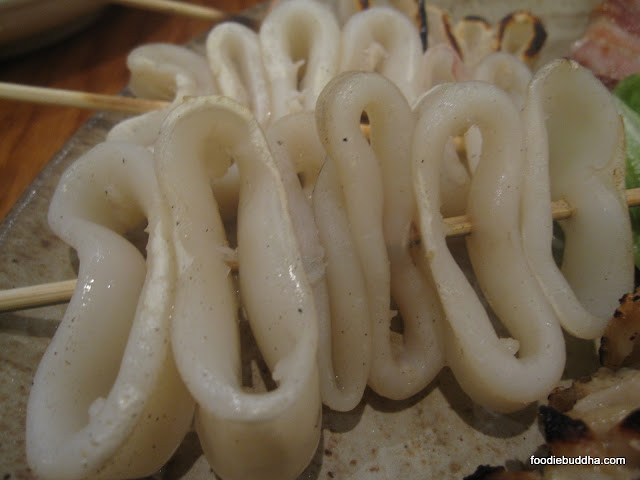 Squid or Octopus you say? Nope, that’d be cuttlefish.  Looks kinda similar … right?  Well, it also has a familiar flavor profile.  Chewy and dense, this too was solid quality, but nothing to make me go wow. 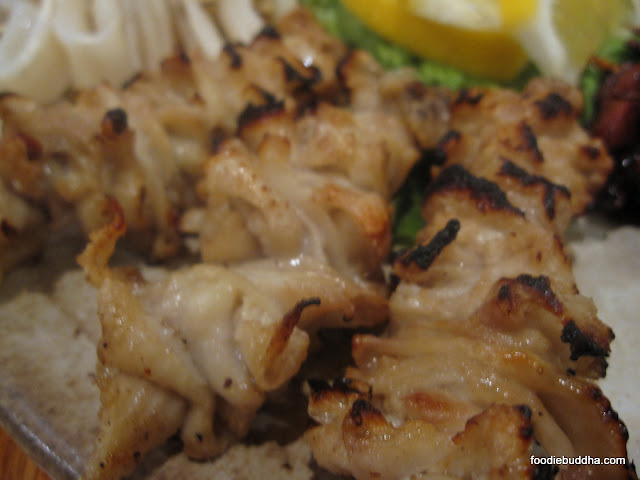 HELLO TORI KAWA!  Please come again!  Yes, this grilled chicken skin is why men first yanked clucky out of the yard and into the kitchen.  Sooooo goood.  Hella juicy, the bites were crunchy at the edge, and salty and soft in the middle … I would have swung elbows to procure more … but my mother taught me better.  DA’AMN MOM!

Drum roll please … (boy I use ellipses a lot on here, and I do in real life).  Yes, no trip to YJ is complete without a sampling of my little bowl of noodle joy: 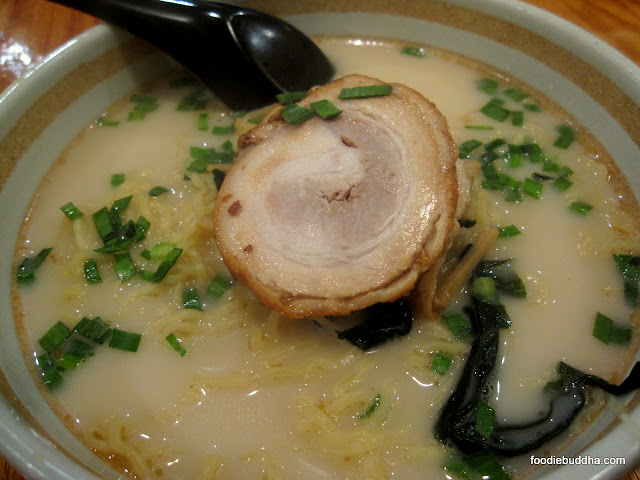 Five people means five orders of tonkotsu ramen.  Though Spark Plug has harshly teased me with memories of slice pork galore, this dish remains really good (and pretty consistent) even with just two slices of roasted pork.  Even with minor inconsistencies from time to time, this broth is really awesome.  The noodles are always just right, and I’ve stabbed more than my fare share from other bowls.  Yes, I will steal your ramen if you aren’t careful.  Get it!  Maybe if you’re lucky, you’ll end up with Dea as your partner in crime.  Weigy scored the rest of hers though! :-(  Spark Plug showed me no such mercy.

All in all, the company helped make this a great adventure.  We had a ton of food, which roughly came out to $25/head with tip, and all of us left healthy and happy.  I will say that this one YJ yakitori meal left me reserved.  It’s so inexpensive, there’s no reason not to try a few skewers if you’re there for dinner.  That said, the true winner for me here is still the RAMEN!